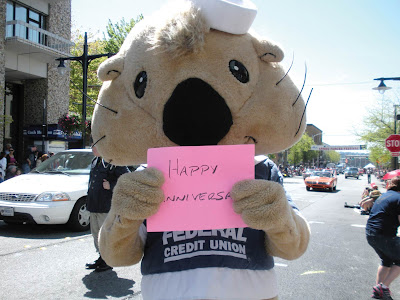 Busy week. Had to sponsor a hole at an Armed Forces Day golf tournament. Lot of fun. Standing there watching people golf all day while I knew I had go to back to work. I wish I had Tiger Woods’ life.
Golf for a living. Could it be better than that? Wake up, practice golf all day. Work out. Drink some beer and tell my wife I have to go back to work for a couple of hours … at the driving range. Unbelievable. There is something about it being 7 a.m. Dew still on the ground. Sun just coming up over the mountains. Fresh cut grass. You have nothing to do all day. You have a bag with a 6-pack of ice cold beer. A cigar and some smoked almonds and a banana for a snack. And for 4 hours you and a good friend talk smack about who will have the LEAST TERRIBLE score. Then you will drink some beers and eat some lunch and hit the strip club on the way home to see, as my boy Biscuit says … some Wiggles. That is a good day. B
But I digress.
Then Saturday, I had to go to the Armed Forces Day Parade. It is fun, but every year for the parade it is 55 degrees and raining sideways and just miserable … until the last two years. That’s the exact time when I decided to dress up in a mink-lined 95-pound mascot suit that is 30 degrees warmer than it is outside to walk 1.5 miles and hug kids and drunk, grown-ass women. The last two years it has been 85 and 75 degrees and HOT. Of course.
This year I had a Camelbak on with bourbon in it while I marched. One lady said, “you smell like my husband.” So I said back, “Does you husband say this? ‘Oh … my suit has no hole in it.”
Damn. One kid said … Mommy, Sammie (the Mascot’s named Sammie) said the f word. Shut up, kid. Before I put my furry foot in your ass.
Happy anniversary. Every year it comes around. You know it is coming and you try something different this year. You have the parade, so you say … I will wait ‘til later and tell her. I have something for her. But that s$#% don’t work. You know why? ‘Cuz she rolled over at 12.09 a.m. and saw the clock and was already thinking Happy Anniversary … and you didn’t say s%$#. Then at 3.04 a.m. she sees the clock again and you are 3 hours deep into your anniversary and you have the unmitigated gall to be sleeping. You should be rolling over, funky breath and all, saying happy anniversary. She has something for your ass now. So she waits. And your celebration better be good now. ‘Cuz she is steaming. But you wake up, you don’t say a word and try to roll out of the house and she gets you right as you close the door on the way to work … happy anniversary to you, too! Now you’re screwed. But you charge on. See, it all started off wrong. You were dating and you celebrated the 22nd of every month ‘cuz that is the day you met. You celebrate the first time you kissed and the first time, you know … did the nasty. Well, that was your wedding night of course … Celebrate the first time we did what? I am trying to remember the last time we did that s%$#. Celebrate? I should be begging. Every now and then you forget s%$# so you can start a fight. Cuz the after-fight sex is great. Tomorrow start a fight about something … then send me a thank you note. Happy Memorial Day if she shoots you.