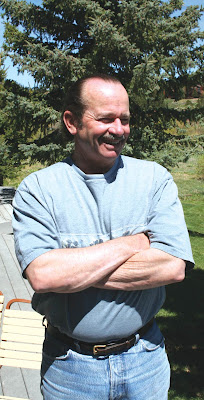 Many of you know Kirk Stapp as a 22-year Mammoth Lakes Town Councilmember, or as a longtime teacher in the Mammoth schools. He has a reputation as a bit of a white-collar brawler, having fought hard as a staunch teacher’s union representative.
He also, as it turns out, was a bit of blue-collar brawler, having fought and been wounded in Vietnam.
Most people don’t know much about Stapp’s stint in the military, nor do they know much about what’s really going on in modern-day Iraq, or about the pressure from within the educational system to ignore what’s going on in Iraq.
Stapp addresses all these elements in an ambitious and well-conceived first novel entitled “Teaching Iraq.”
He started the book two years ago after he retired from teaching. One of the final classes he taught before retirement was political science to a continuing education class at Sierra High School.
This class was comprised of many students who for one reason or another didn’t follow a traditional educational path and were a magnet for military recruiters.
Knowing their teacher served in Vietnam, many approached Kirk looking for advice.
His autobiographical novel talks about how he, through classroom lessons, tried to get his charges to see the salesmanship behind war. “I wanted them to realize that Iraq isn’t just some censored thing. It’s got ugliness.
In a parallel narrative, he talks about his own experience in Vietnam as well imagining the experience of a soldier serving in Iraq.
“I never told the Vietnam stories while I was an active teacher,” said Stapp.
But he tells them now. And he tells them with both horror and humor.
In particular, there’s the story about when he got shot. He was a passenger in a jeep, and saw a bend in the road up ahead, and just knew the jeep was about to get ambushed.
And then it happened. And he was shot. “And I experienced that existential moment, and it’s lasted my whole life, where I was facing death and looking around and saying, ‘Where’s God?’ That feeling never goes away.”
After he recovered, he spent one more year in the military. “I stayed a good soldier. I got promotions … They say that 30% of the soldiers returning from Iraq suffer from Post-Traumatic Stress Disorder (PTSD). In my time, they called it shellshock. I was probably in the 70% … but I was drifting when I got back. I couldn’t put it together … I was never afraid ‘til they asked me to go back again.”
Stapp didn’t go back again.
After he served out his time, he wanted to get on with his life and put the military behind him. Why teaching? It was somewhat of a pragmatic choice. “I liked the idea of having the summers off,” he laughed. But he also liked the idea of learning things. “That’s the thing about teaching.
You‘re continually learning.”
But what about the teachers in the book you describe who stop learning?
“That’s just reality,” he said with a shake of his head.
Stapp believes a lot of the fun and dynamism in teaching has been removed due to standardization. He spares no words when it comes to his scathing critique of the No Child Left Behind legislation or of his thoughts on the modern textbook (miserable).
In fact, he spends a whole chapter (28) in a digression where he rails about the inadequacy of textbooks.
“Back when I started, we created our own curriculums, administered and conceived our own tests to monitor the progress of our students, and bet six-packs with our fellow teachers to see who could inspire the most progress within his or her classroom.”
I admitted to Kirk that I had one trepidation I had when I began his novel. “You can be a little preachy,” I said gently.
“Yeah, that was a difficult thing to overcome, being preachy,” he admitted. “Some of it is still in there.”
But not enough to get in the way of the story.
One of the themes of the book that is very powerful is lies. What is a small lie? What is a big lie? Most kids, he said, “generally think that lies are okay.”
Which is why so many of them sign up for wars and discover that lies can have some very serious consequences … especially to their health.
“We probably have 20 kids (graduates of Mammoth High School) currently serving in the military. The last kid I spoke with who went over there. He’s 21 years old. He’s already been to Iraq and back. And all he could say to me was ‘What a s%$#hole!’ He didn’t want to talk about it.”
In terms of actually getting the book published, Stapp said it was a study in frustration.
“I submitted the entire novel [to the publisher] four times. By the time it was actually published, it was a mixture of all four versions.”
He does, however, like the quality of the product. It’s well stitched and feels good.
“The way self-publishing works is that you choose the financial model and that determines the price. The book’s still $19, which is higher than I’d like, but you print the books on demand and the contract with the publisher is non-binding.”
If Stapp finds a literary agent, he can possibly take his book to a publishing house with wider distribution and more marketing muscle.
Is he pleased with the book? It appears yes, though he still wonders whether he achieved closure in the final chapter, but as his neighbor and fellow writer Allen Folsom told him, “Novels are never finished. They’re abandoned.”
Teaching Iraq is available for purchase at the Booky Joint in the Minaret Mall in Mammoth Lakes.