Over a decade ago, journalist and photographer Rick Gunn shelved his workaday life and set out to see the world on a pair of wheels.

In three years, Gunn rode his bike 26,000 miles around the planet. He traveled through 33 countries, went through “at least ten pairs of bike tires, five iPods, five pairs of bike shoes … and, mysteriously, only one pair of underwear,” he said, laughing. “The one thing you realize when you do a bike trip for three years is how amazing the human body is, because everything else breaks.”

Somewhere in Bangladesh, Gunn witnessed two young girls sipping water from a polluted pond, and something changed in him. He realized that he couldn’t just observe, and changed his focus to giving back when he wasn’t on his bike. Gunn fed AIDS patients in Thailand, planted trees in Malaysia, and worked with a bomb extraction unit in Laos, among many other service projects.

Gunn captured 52,000 images on that journey, which he whittled down to 350, along with personal stories—a collection which he subsequently dubbed “SoulCycler.” Gunn presented “SoulCycler” across the United States, to high school students and at TEDx talks, sharing his stories of service and learning.

Next weekend, Gunn will bring  a new talk to the Edison Theatre in Mammoth Lakes, compiled from three more international trips he’s taken in the last few years. Entitled “India, Iran and Idomeni,” the presentation will follow Gunn as he forms a fast friendship with an Iranian cyclist, feeds Syrian refugees, and shares children’s messages of love and hope across an international divide. 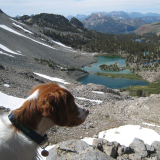