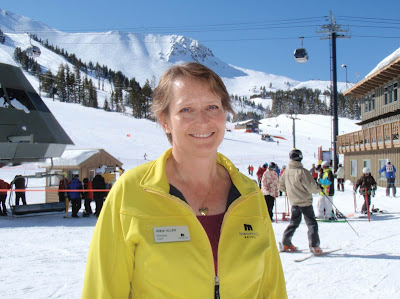 The story of Anna Allen

When people first meet Anna Allen, most would never guess that she’s a walking miracle.
Anna has steely blue eyes, auburn-flared hair and can often be seen wearing a bright yellow Mammoth Mountain Host jacket with the requisite black jeans. She has a gentle sweetness about her that speaks to being a mom; she and her husband of more than 20 years, Brent Allen, have two kids: Keith, 19, the Valedictorian of last year’s Mammoth Charter School, where Carissa, 16, is a junior.
Anna speaks softly and shows no outward signs of any miraculous flare or any physical impairment, shy of a slight hitch in her giddy up — the kind of limp you often see in ski towns. So, from an outward appearance, Anna seems pretty much like the rest of us, except that instead of simply being made out of flesh and bones, she’s got a prosthetic leg, too.
But it’s what you can’t see about Anna that makes her so miraculous. For she’s also full of an exceptional amount of willpower, hope and courage — qualities required for the miracle of surviving North America’s deadliest ski area avalanche.

March 31, 1982, was yet another snowy day in north Lake Tahoe. It had been dumping for days, and so much snow had fallen that Alpine Meadows (Squaw’s little sister/next door ski area) had been forced to close for the day. A good idea since the canyon-based, 2,400 acre Alpine Meadows is considered a Class A avalanche area (averaging nearly 500 inches of snow per year) and often records more “avies,” or “slides” as they’re sometimes called, than any other resort in the country.
The closure was also good news for Anna Conrad (her maiden name); it meant the 22-year-old, soon-to-be college grad didn’t have to work, and could spend the day cross-country skiing with her boyfriend, Frank Yeatman. The couple’s first stop that afternoon was to pick up Anna’s only pair of ski pants, which were in her locker in Alpine’s Summit Chair/Mountain Operations Center, a 3-story, narrow A-frame, that was designed in part to shield the lower Summit chair from any slides.
While they were in the building, Alpine’s Mountain Manager, Bernie Kingery, pulled Anna aside to warn her how hazardous it was to be out during such conditions.
“He really reamed me out for skiing up there and not realizing how dangerous avalanches were,” Anna explained. It was the last talk Bernie would ever give, but it probably saved Anna’s life.
Moments later, just before 4 p.m., as Anna walked back towards her boyfriend, thethe Summit building was hit by a monstrous avalanche. Still inside were seven souls.

The chances of surviving an avalanche are about 90% when the victim is found within 15 minutes, but drop off dramatically for each minute after that. At the time of the avie, no one buried under any such slide for any significant amount of time at a U.S. ski area had ever survived. Three of the people trapped in the far end of the building were able to escape within an hour, but four were still missing.
Avalanches are actually preceded by strong blasts of air and it’s estimated that a gust of around 200 mph first hit the Summit building, splintering it into kindling. The wind was followed by a wave of snow that fell 800 feet and broke off from a 1,000 foot crown line, more than five feet deep. The Sierra Nevada had literally swallowed up the building and everything in it.
“People just don’t survive these types of avalanches,” Anna said. “The rescuers had a glimmer of hope, but nobody really believed anyone was alive.”
Anna awoke in pitch darkness, freezing cold and with the worst headache of her life. She had no idea where she was or how she got there. For a while, she drifted in and out of consciousness. She heard the snow removal blasts, but thought she was sleeping in her bed a mile or so down the road and the power had simply gone out.

“It took about 36 hours for me to figure out where I was and what had happened, and that there was no way I could get out on my own,” Anna recalled, a steadfast look in her eye. “I never started to panic. I just tried to do what I could until somebody found me.”
Thanks to a pack of matches she found, Anna realized that she was trapped underneath a couple sets of lockers that had fallen on top of some benches and had created a crawl space, two feet high, by three feet wide, by about five feet long. She had no food or water, nor coat, hat or gloves and was wearing blue jeans. Her head was still pounding.
Close to 100 people were now working on the rescue/recovery efforts. Anna could hear rescuers calling out for her, but they couldn’t hear her response.

“When you’re thirsty, food is the furthest thing from your mind,” Anna explained. Besides being parched to the point of pain, Anna also started to lose feeling in her foot. “I’d been taking turns, taking each foot out and rubbing it to keep warm. But they eventually went numb, which didn’t seem so bad at the time,” she said.

With the storm still raging outside, rescue efforts were hampered. No voices called out to Anna. No cannons fired to blast away snow and echo sounds of hope. And yet Anna still believed.
“My thoughts were simple: they’re going to find me and I’m going to walkaway from this,” she said.
Monday
“That last day, I prayed more than any other day,” Anna said.
When they finally broke through to her, Anna instantly reached out her hand, grabbing at falling snow to quench her thirst.
“Is that you, Anna?” a rescuer called. “Of course it is,” she replied. Her immediate request for water was, however, misquoted by the assembled media throng; meaning word went out that her first request was for “a beer, which wasn’t that bad since people sent tons of beer to the hospital,” Anna said with a smile.
While beer usually helps, Anna was still far from being in the clear. She would spend the next two months in the hospital, drawing on strength from family and friends as she battled the effects of severe frostbite and the psychological trauma of enduring such an experience. Anna would eventually lose her right leg below the knee and the toes on her left foot. But she was the lucky one. Seven people, including her boyfriend, lost their lives to the avalanche at Alpine Meadows that day. She was the sole survivor.
Graduation
That June, while more than 10,000 people cheered her on, Anna received her degree from UC Davis. And she didn’t just receive it. She walked up four stairs, across the stage, back down another set of steps and to her seat again. That’s when she realized that the arena full of Aggies were all standing and cheering for her. “That moment still gives me chills,” she said.
By the following winter Anna was, amazingly enough, carving turns again, this time on Mammoth Mountain. Soon thereafter, she started calling Mammoth, the heart of the wintry High Sierra, home and was asked to start the ski area’s very successful public outreach Host program.
“I always loved the mountains and Mammoth in particular and I didn’t want to stay away from them because of what happened,” Anna said. “The avalanche had taken my leg. It had taken my boyfriend. I didn’t want to let it take anything else from me.”

[A newly released book about the avalanche entitled A Wall of White: The True Story of Heroism and Survival in the Face of a Deadly Avalanche by Jennifer Woodlief is now available at the Booky Joint.]
Share