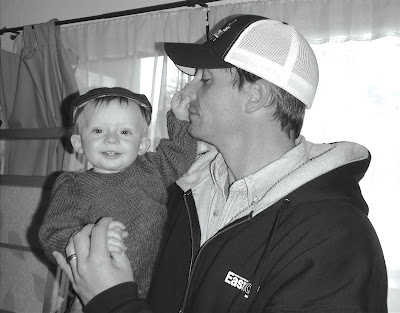 It’s not an alien; it’s a screaming, slimy, bundle of squirming love.

Long before Jesus was a baby or things like epidurals or stay-at-home dads were invented, having babies was a much simpler process.
When it came time to give birth the women folk would all huddle together and root on the soon-to-be mom as she swore like a trucker and learned a new meaning for the word “discomfort.” Meanwhile, the men folk would huddle together and smoke cigars and talk about fishing. Occasionally, the soon-to-be granddad would be holding a shotgun in his cigar free hand and pointing it towards the region of the soon-to-be dad that caused all the excitement in the first place.
While many argue that the French have given much to America (i.e.: the Statue of Liberty, the baguette, and the Ménage-a-Trois), it’s also easy to argue, especially for dads-to-be, that it would be nice if we could return a few of their gifts to them (i.e. over-priced champagne, the baguette, and Lamaze)
Dr. Lamaze is the French obstetrician who passed along the theory that supervised breathing and relaxation techniques were the best way for a mother to give birth. The popularity of this technique spread across America like an STD around a fraternity house. And before you knew it, dads became the supervisors and were forced away from that dreamy world of smoky, fishy do-nothingness and stuck smack dab in the middle of the action. As my birth into daddyhood, a year ago this month, proves.
“I’m sorry, Pal,” one of the nurses said, as the big moment finally arrived in a whirlwind of sterilized chaos, “but you can’t smoke a stogie in the operating room and none of us care about the monster Alpers you caught at Crowley Lake last fall!”
Naturally, it should come as no surprise that rumor has it the late Dr. Lamaze was beaten to death with a baguette. At least he should have been, because what Lamaze really did was take away the last few precious moments of peace, quiet and sanity a dad will ever have. Once that screaming, slimy, bundle of squirming love arrives and you realize it’s not an alien but actually your own kid, the game is changed forever. For it’s at the exact moment that the child’s life begins, that the dad’s confusion truly starts.
“Okay,” the Doctor explains, as mom gets to the brink of childbirth and starts to bear a striking resemblance to Linda Blair from The Exorcist. “Once your child arrives and we make sure he’s breathing and ready to go, we’ll call you over.”
Why, exactly, they need to call dad over is never specified. So first time dads like myself are left to wonder: Maybe they need me for some kind of group hug or better yet, maybe we’ll all do a Fun Bunch leaping high-five like the old Washington Redskins.
Then, right at the exact moment that you think mom is about to rip your hand right off your wrist and make you eat it for doing this to her, you hear the softest cough you’ve ever heard. After a few moments of staring into one another’s blood shot, deer-caught-in-the-headlights eyes, the new parents are torn apart when dad is called into action.
“Come on over here and hold this,” the Doctor orders, handing over a pair of scissors. Prompting the brand spanking new dad’s boggled mind to think things like: This is cool, I’m helping out, but it does seem kind of odd that they need me to hold the scissors since there are about 147 other people in the room.
Before dad can get a handle on the sheer number of scrub-clad people in the room, roughly the population of Lee Vining, that he didn’t notice were there until just that exact moment, the Doctor gives the order.
“Okay, cut it.”
“Cut what?”
“The umbilical cord.”
“I’m not cutting that. I’m not cutting anything,” the average (or awkward, stogie deprived) first time dad will reply; realizing that for all her formal education the Doctor obviously doesn’t know that putting a pair of scissors in a new dad’s hand and pointing him at his three-minute old baby can cause some men to suddenly start feeling like Edward Scissorhands’ drunken, legally retarded brother.

“If you don’t cut the cord,” the Doctor explains, “all the other dads will make fun of you.”
Seeing as how peer pressure is the kryptonite to any man’s sense of logic, something immediately gets cut, and us luck would have it, it usually turns out to be the umbilical cord.
The real magic is that from that moment on dad just seems to somehow inherently know that life will never feel or smell the same again, but that it’s okay so long as people don’t try to make you eat any baguettes. The best part, besides knowing that you’ll never have to waste your time with Lamaze again, is that even though the new dad feels foggy, overwhelmed and about as dumb as a doorknob, at least there’s now one person in his life who doesn’t care or appear to know the difference.
Well, that pretty much sums up in a few confusing moments what the first year of daddyhood is like, except there’s far less sleeping or cigar smoking, you always seem to be misplacing stuff like your car keys, camera or frontal lobe, you usually smell like a wet diaper and you regularly find Cheerios in places in you didn’t previously know you had places. But none of that matters the first time your child smiles at you or calls you dad or you realize that before long you’ll be able to have him fetch you a much needed beer as you prepare to sit down and watch his favorite Elmo video for the 31st time that day.

“In childbirth classes, they showed us actual pictures of a fetus developing inside a uterus. They didn’t tell us how these pictures were taken, but I suspect it involved a great deal of drinking.” –Dave Barry