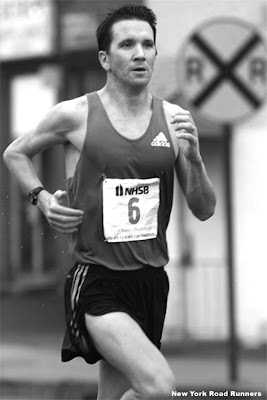 Terrence Mahon is Mammoth’s Running Coach to the Stars

Run into Terrence Mahon on the street or in in the grocery store and you’ll think of him as an affable, unassuming guy. He’s not tall and hardly imposing. On the other hand, upon talking him, you find out why he’s coached some of the best running talent in the world, including Olympic athletes.
Mahon, guest speaker at the March 9 edition of Snowcreek Athletic Club’s lecture series, wasn’t there to talk to a roomful of marathon hopefuls or wannabes, but perhaps that’s the whole point of the lectures. Most of us will never run at the level of a Meb Keflezighi or Deena Kastor, but we can improve everything from cycling to golf by integrating some of their training concepts into our own workouts.
Some things are fairly obvious, such as the emphasis on quality over quantity. Many ideas, however, just take a Mahon to break them down for us.
For instance, pro runners use big stretches and big contractions, and literally hop, skip and jump through many of their workout routines. (Visit Team Running USA’s official site, www.runningusa.org, e-mail Mahon and he’ll send you copy of them for your own use.) One thing us amateurs have in common with the pros: we can all benefit from better basic mechanics.
“It’s about coordination and communication,” Mahon told the audience, referring to the intersection of the nervous system and the muscles they control. “Want to see something funny? Challenge an average runner to backpedal or sidestep,” Mahon said. “They spend their whole workout week going 130 miles straight ahead. Going side to side, or backwards? Hah!”
Emphasizing the total body, and more complex movements, Mahon added, “I like to see all the joints working together.”
Complex movements, however, don’t add up to overcomplicated workout routines. “We need to get back to using more of our own bodyweight,” he said. “Add a little resistance and we’re in great shape.”
In a way, he’s also an advocate of the recent trend toward so-called “muscle confusion,” which will be familiar to those who have checked out trainer Tony Horton’s P90X program. Essentially, this involves mixing up a workout so that various muscle groups are challenged in different ways, and don’t get accustomed to the same thing over and over, causing them to plateau.
One thing he wants to avoid is overworking a muscle group, which can lead to “hypertrophy,” basically an increase in the size of cells, while the number stays the same. “If you overuse a muscle, you get into recruitment issues,” Mahon said. Overdoing it also applies to taking in too many calories. “Eating 8,000-9,000 calories a day is great if you’re Michael Phelps, but he’s also in the pool all day and only has 3% body fat.”
Core, or abdominal work, is a classic case in point. “Core is about how things work standing up,” Mahon told the crowd. “You can work your abs with 500 pound weights, and they’ll get firm, but that won’t necessarily make you a better runner or skier.”
Keep it simple, and only work your muscles to the point of diminishing returns and no further, and “life gets a lot easier.” Mahon’s not saying you can avoid doing the work. What he wants is for you to get the most out of that work, and reduce, if not entirely emiminate, the chances for injury.
Snowcreek partner Elliott Brainard hopes more locals and visitors will take advantage of the series. “It shows the range of expertise we have available right here in Mammoth,” Brainard remarked. Snowcreek’s Alana Levin put it, knowledge imparted by the diverse lineup of athletes, coaches and other health and fitness professionals is meant to augment the training of the average, everyday Eastern Sierra sporting enthusiast.
Using one of Mahon’s favorite expressions, it was “cool.”