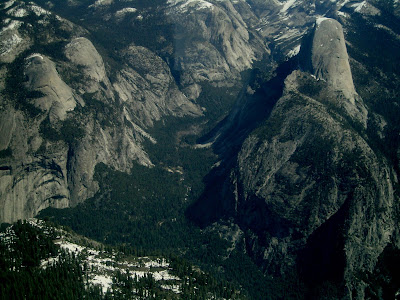 You’d think that an agenda item with a $4.5 million price tag would take a long time to hash out, but this one turned out to be a quickie. Kelly Garcia, Public Works Assistant Director, updated supervisors on the Capital Improvement Projects currently in the works with the FAA (Federal Aviation Administration) vis-a-vis the Bryant Field and Lee Vining airports. The figures are big, but surprisingly straightforward.
Regarding Bryant Field, Garcia said the FAA has delayed the environmental analysis for the runway approach over Mono Lake for 1 year. In Lee Vining, plans for reconstruction of the runway include a new electrical building and 30-inch high runway lights (more visable when there’s snow on the ground). Next year, she said, plans include adding a taxi lane parallel to the runway, and construction of the new terminal building. In 2011, hangars are on the drawing board, and a self-service fuel tank is slated for 2012.
Another update to the airport master plan isn’t due until 2013.
All the supervisors really had to do is authorize the contracts with consultant PBS&J, and give the go-ahead for Public Works to execute grant applications and other funding paperwork set up with the FAA. PBS&J still has some remaining design work on Lee Vining’s airport, and will then turn its attentions to Bryant Field. Meanwhile, the FAA has approved 75% of the $4,275,000 in funding, the rest pending some bid finalizations that are still outstanding.
With the federal and state funding, the County’s out of pocket costs for the whole endeavor: $120,487. Gotta love subsidies. A scant 15 minutes later, the Board green lit the entire package of requests 5-0.

Sometimes it’s the little things that get the most attention. You’d think they’d be dispensed with quick and easy, but as happens sometimes, big ticket items glide through the approval process quickly, and yet $10 can set off a lengthy debate.
A $10 membership card to Mono County’s Memorial Hall exercise facility became an odd centerpiece of Tuesday’s Board of Supervisors meeting.
That’s oversimplifying things a little, and as Lunch pointed out, the way things are going, you’d think Mono County would be thrilled it even has an exercise facility. Still, the black and white delineation as to who uses it and under what terms has turned a shade of gray of late, and the Wellness Committee has put forth a recommendation to the Board that seeks to redefine cost and eligibility.
The committee said it wants the facility limited to only County employees and spouses, who would pay a $10 use charge, and County retirees and spouses … same $10 deal there, too.
Right now, the big gripe seems to be that some membership cards are being passed around and abuses of privileges may also be leading to misuse of the facility.
At present, 62 cards have been issued, including 32 for County employees, 9 family members, 4 retirees and 10 for Forest Service employees, as well as a handful of other users.
Marines living in the area have been known to frequent the gym, raising the question of whether it should be open to the troops. Clearly the County doesn’t want to alienate our servicemen and women, though as was pointed out, they have their own facility on base. Supervisor Hap Hazard suggested a six month probationary period, but otherwise, the Board came to no consensus on the question.
Another issue was that of other agencies. The U.S. Forest Service said it would be fine with backing its access down to just fire crews, which was the original limit of their use agreement in the first place. Supervisor Vikki Magee Bauer, however, said she wasn’t sure that was going far enough. Her sticking point at this juncture is deciding what other agencies tangential to the County would be able to access the facility. “If we’re going to limit [access], I think we should limit it to County employees,” she said. “It’s a small facility and I have a problem opening it to other agencies.”
An age limit was also brought up, possibly taking any family members off the employee’s card at 18 or so. “Snowcreek [Athletic Club] kicks you off at 21,” Bauer observed.
Board Chair Bill Reid said that he’d like to see “another run at it” with participation of the Forest Service, and then have a more detailed, fleshed-out version of the recommedation brought before the Board. Other members seemed to agree with that idea, many saying they thought a vote that day would be more reactionary in nature.
The Committee and counsel Stacy Simon said they would go back and explore a possible restructuring of the user agreement, as well as what constitutes termination, age expiration (as relates to members’ children) and violations.

Supervisor Tom Farnetti updated the Board that during the last Town-County Liaison meeting they discussed next fiscal year’s ERAF situation.
The shell game being played by Sacramento with the Educational Revenue Augmentation Fund was the cause of some serious budget concern recently, but, while the Town and the County may have dodged a $1 million bullet this year, that doesn’t mean it will be so lucky the next time.
Farnetti said a legislative solution is being sought, and to that end, both the Town and the County are splitting the $20,000 fee to retain a lobbyist to represent their mutual interests.
In addition, Supervisor Hazard asked to agendize an item to discuss a possible County push for review of maps submitted by various land managers following the recent signing into law of the Omnibus Public Land Management Act.
Hazard said managers have a 1-3 year window to finalize maps. “A lot of work went into defining the boundaries, and we pretty much got everything we asked for from both sides,” Hazard summarized. He added that at the moment, “there’s a lot grey shading” on the maps as they exist now, and that some drafts are already being examined by the Forest Service. “I think we should make sure that the County’s work on those boundaries is properly represented.”