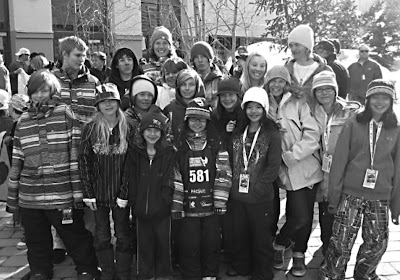 If you want to find the best skiers and snowboarders in the country you don’t have to look far, in fact, they’re right here in Mammoth. Earlier this month, the Mammoth Mountain Freeride ski team and snowboard team travelled to Copper Mountain, Colo., for the annual USASA (United States of America Snowboard Association) National Championships and dominated with a strong presence.
“I constantly had coaches and parents from other teams coming up to me and congratulating our coaches and athletes. Every time they announced the standings you would here “Mammoth, Mammoth, Mammoth,” claimed Benny Ryerson, Mammoth Mountain’s Head Freeride coach.
The ski team finished the series of events with 4 gold medals, 7 silvers, 2 4th place results and 6 top 10 finishes. Among notable standouts for the Freeride team was 18-year-old Steven Kutsch (Profiled earlier in the year in The Sheet) and 10-year-old Abigail Hansen who both finished the competition series with the best overall results (which is a point total for all events, skiercross, slopestyle, and halfpipe).
Though Coach Ryerson emphasizes that the USASA Nationals isn’t necessarily a team event, Mammoth still ended the competition with an overall 1st in the nation based on overall point totals.
Not just anyone gets invited to the USASA Nationals. The USASA competition series is considered to be one of the nation’s premier amateur competitions. Throughout the season athletes compete in either slopestyle, halfpipe or skier/boarder-cross with only the top athletes receiving invites to Nationals. Head Snowboard Coach Ben Wisner told The Sheet, “It’s a great opportunity for kids to get some competition experience as well as some national exposure.”
Mammoth’s snowboard team finished with 1 gold medal, 1 silver, 4 bronze and a pair of 4th place finishes. Kasidy Nowakowski brought home a 2nd place overall with Judd Henkes and Candice Berger both placing 3rd overall. “The kids even did well in the racing disciplines, placing higher than many kids from strictly race programs. Not bad for a bunch of park rats from Mammoth,” said Wisner.
While in Colorado the team stayed in Copper Mountain’s Village which is located at the base of the mountain. “It was great. When we weren’t competing we were rooting for the snowboard kids or just running around hot tubbing in the Village. We also had full access to the new Woodward at Copper facility,” stated Ryerson, which is a state of the art indoor ski/snowboard and skateboarding training facility.
But overall, the huge success comes directly from the athletes who make up the team. “I had a great time this year. The Freeride coaches along with Oren Tanzer (Director of Youth Action Sports Marketing) and the Unbound staff really made it possible for me to return to Nationals. I just hope to be back next year,” said Freeride team member Steven Kutsch.
Mammoth’s first-class performance this year is a testament to the strong support from parents, MMSA, Unbound terrain parks and all the sponsors who make it possible to maintain one of the nation’s leading programs. Though Mammoth maintains a top notch program they do not have a top notch facility.
Recently Mammoth’s Race Department held the Mammoth Invitational, an event focused on raising funds for a proper training facility to be named The Mammoth Center for Excellence. “Mammoth is already approaching the upper echelon of competition so it’s critical for our athletes to have a world-class training facility,” said Mark Brownlie, Head Coach for Mammoth’s Race Department. Brownlie went on to say “We’re really proud of all the athletes and coaches, their hard work and tenacity is a testament that we’re headed in the right direction.”
Though the event collected close to $150,000, they are still far from goal. For information on how you can help support Mammoth’s athletes contact the Race Department @ 934.0795.