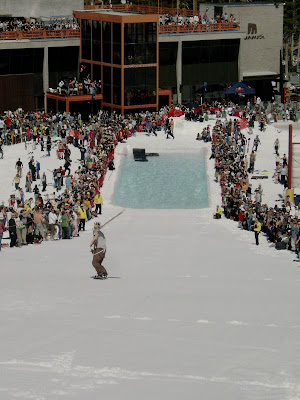 Dear Journal:
Today I went to the Pond Skim event over at Canyon Lodge. I decided that it would be a great opportunity to bring my dog (Hot Dog) for a little meet-and-greet with the local drunks.
Predictably, as soon as I stepped onto the snow and headed up to the pool, Hot Dog dropped a big steamy hot dog right in the middle of the crowd.
“Hey! Now that’s why … that right there is why!” I looked to my left to see a Mammoth security guard screaming his face off. “What’s why?” I asked. “Dogs aren’t allowed on the hill,” he said, glaring at the mud monkey left propped up in the snow. This completely floored me. The idea of no dogs on a ski hill was news to me. What if there was an avalanche? Hot Dog could at least sniff around and appear to be helpful. I always thought dogs were synonymous with skiing. Please tell me you remember Spuds McKenzie, the beer-guzzling, mountain-shredding Bud Light pit bull mascot from the 80’s?
Reluctantly, I put Hot Dog in the car, and returned to the Pond Skim. After watching a few splashdowns, I started to pay less attention to the event and more attention to the announcer, who just so happened to have the biggest handlebar mustache I’ve ever seen. I began to think that if you’re a Pond Skim announcer hired by the Mountain, that must mean you’re exempt from the company’s facial hair policy. Do you think Mammoth is outsourcing hired mustaches in order attain some lost street credentials? Shaving aside, the guy did an awesome job; he looked like a science experiment that combined Hank Williams Jr. and John Madden. Seriously, how hard it could it be to be a Pond Skim announcer? Now commence wavy hand motions a la “Wayne’s World:” “Ooooooh, splish splash ladies and gentlemen, these guys spend more time in the pool than Michael Phelps!” It’s too easy. Give me a handlebar mustache and a microphone, I got this. On second thought, the only job better than a Pond Skim announcer would have to be a strip club DJ (which I hope this guy does during the week). Commence wavy hand motion: “Okay gentlemen, now on stage is Fantasia! Don’t forget about our exclusive $25 table dances and remember it’s always a gooolden evening at the Goooold Finger!” God that would be awesome, I already have the short sleeve tuxedo shirt and black vest. Jesus, why am I writing for a newspaper?
Extra notes on the evening:
Maybe I was drunk but I am pretty sure I saw a Whiskey Creek bouncer with his shirt off rocking a tramp stamp.
Is there any way to get ATMs on the mountain that don’t charge employees ridiculous service fees?

Dear Journal:
I headed over to Canyon Lodge again for the Dummy Downhill and the end of the year employee party. There truly is no better way to thank extremely poor, laid-off ski bums than by throwing them a party with free food and $1 beers. Now just toss in a drag race with heaps of crap sliding down a hill and you have yourself a righteous redneck throwdown. The combination of laid-off people, a drag race and cheap beer completely reminded me of being back in Michigan. Holy Crap! A mechanical bull! While watching urban cowboys test their scrotums on the mechanical ball cruncher, I couldn’t help but wonder why there weren’t that many chicks riding the bull? Man, forget about being a strip club DJ, it’s all about being a mechanical bull operator. What an incredible job! As I was daydreaming about gyrating Pamela Anderson on a bull with tiny little joy sticks, I was interrupted by a man in a black t-shirt and jeans. It was CEO Rusty Gregory.
“Hey Rusty, thanks for the party!” I slurred. “Yeah no problem, and thank you for all of your hard work.” Rusty then looked down at my beer and gave me a weird look. “You’ve got two hands don’t you? Why do you only have one beer?” I sheepishly agreed and back peddled to the bar. While waiting at the bar I heard a voice from above, similar to Mufasa. I glanced upward and there on the Canyon Lodge roof again was Hank Madden, Jr. belting out raffle prizes! Man is there anything this hybrid genius experiment can’t do? If anyone has earned a complimentary mustache this season it’s that guy. Speaking of mustaches, I’m pretty sure I heard Bill Cockroft speaking in secret code to another department head that there may be a Mustache May fundraiser event for Mammoth employees. Too bad they laid everyone off. Well at least Hank Madden Jr. will pick up the slack. What a badass!

Extra note on the evening:
So Woolly got a podium spot in the Roxy Chicken Jam mascot comp and wins the Dummy Downhill!? That elephant deserves at least a Black Diamond award or perhaps maybe a more appropriate gift would be a modified handgun t-shirt cannon. I think it might be time to hook-up a mascot with some serious marketing firepower.
I truly think next year’s Dummy Downhill should have more dummies and less cinderblocks on skies.