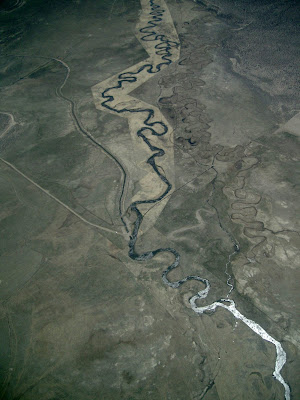 Listen my children and you shall hear, of the midnight ride of the Eastside’s Paul Revere. On this last Saturday in April of ’09, hardly an angler can you find, that knows who to thank for being able to cry out, “Fish On!”
Those “thank yous” should be addressed towards the Eastern Sierra Trout Patriots—but, unfortunately, it appears that despite winning several big battles, the war to keep the waters from Lone Pine to Bridgeport teeming with trout is far from over.

The Redcoats are coming

The Paul Revere of Massachusetts was a silversmith who rode his horse from Boston to Lexington to warn of the oncoming British Redcoats. The Eastern Sierra’s version is a trout farmer and former college basketball coach who drove his truck all over Mono County, calling the region’s Trout Patriots to arms.
In 2004, Tim Alpers, whose family has been raising world famous monster trout for generations, had gotten word that the state—thanks to then former Governor Gray Davis—was going to shut down several hatcheries. And Hot Creek was on the list.
Tim was able to round up all the region’s “Trout Patriots” as he calls them; they included Neil McCarrol, Ed Inwood, Mike Seefeld and Emile Rummel among others.
“We were in real trouble. Everywhere we turned there was no solution. We needed everything (for Hot Creek). It got to the point where they didn’t even have food for the fish or diesel for the trucks to deliver them,” explained Alpers, who served as a Mono County Commissioner for almost a decade. “But that’s the incredible thing about this county, from Tom’s Place to Coleville, when there’s a crisis in Mono County the communities here will drop what they’re doing and help out.”
A 501(c)(3) nonprofit called the Hot Creek Hatchery Foundation (HCHF) was formed and the battle cry was sounded throughout the county. In no time flat, what was needed started flowing. Eastern Sierra Oil donated the diesel for the trucks. Mammoth’s Rotary Clubs and Berkley-fishing rounded up funds and the community of June Lake managed to raise $50,000 all by their beloved selves. All in all, more than $250,000 was raised—forcing the Department of Fish and Game (DFG) to take notice and prevent Hot Creek hatchery from closing. “
“We were a band of mavericks and we made it happen. We overpowered ‘em with so much generosity they couldn’t close the place down,” Alpers said.

Having reclaimed Hot Creek, the Trout Patriots took their fight on to Sacramento. State Senator Dave Codgill, a Coleville High grad, joined the battle and helped get AB7 passed. This is the 2006 bill that was supposed to save the state’s hatcheries by assuring that a third of all proceeds from fishing liscense sales would go back to the hatchery system and kids’ programs.
“We had a hallelujah moment,” Alpers said. “Between that and our efforts it looked like the everything was going to be okay.”
Then, natural and manmade disasters hit.
The plague of fisheries throughout the country called the New Zealand mudsnail got into both Hot Creek hatchery and Alpers Ranch. Meaning that Mono County waters stocked with trout from these farms for generations would have to find fish elsewhere. It forced Alpers to sell and take his trout farming skills to Conway Ranch above Mono Lake and put Hot Creek once again in hot water.
Things have taken a turn for the worse after it was decided funds from AB7 would have to be used for an Environmental Impact Study. This study was forced upon the DFG by a couple of groups that claim stocked trout have a negative impact on wild trout. It’s interesting that people are suing to protect wild trout from planted trout in places where trout aren’t even a native species. Places where the only reason the trout are there in the first place is because they were planted there by man—men, in fact, just like Tim Alpers.

A call to arms

“Everything is starting to take a turn for the worse again and it’s prompted us to re-intensify our efforts,” Alpers said on the eve on yet another trout season opener in the High Sierra.
For this next round of battles Alpers has, however, decided to not just fight for Hot Creek, but for all the Hatcheries in the Eastern Sierra: Fish Springs, just south of Big Pine; Black Rock, just north of Independence; Mount Whitney, which is technically closed but has been cleaned up by volunteers and will be open for tours beginning Memorial Day weekend; and Conway Ranch, a unique public/private agreement between Alpers, the Conway Ranch Foundation and Mono County. HCHF has even officially changed its title to the more encompassing Eastern Sierra Hatchery Foundation.
“Fishing is one of the few affordable family activities left and we want to provide as much quality fishing in the Eastern Sierra as we can. We want to be sure that we’re ready when the next disaster hits—and it’s on its way, ” Tim warned.
As for what inspires our local version of Paul Revere it’s, surprisingly, not the words of a famous patriot (trout or New England), but rather of a famous bear. A former Chicago Bear that is.
“I once heard a speech given by Mike Ditka and he said something that’s stayed with me ever since,” Alpers explained. “He said, ‘People who are successful need to give back to the communities that helped them succeed.’”
[Those who would like to help out the Trout Patriots can go to the website www.easternsierrahatcheries.org or call 760.934.7185]