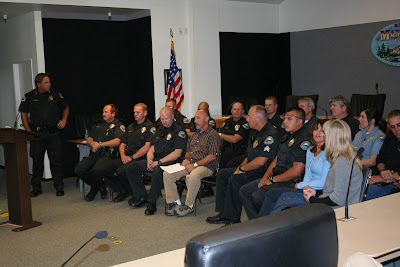 Chief Randy Schienle … and his orchestra … played a sold out gig in Suite Z Tuesday afternoon.

In an effort to quash rumors, wipe the slate clean and provide a fresh start for himself and his embattled department, Mammoth Lakes Police Chief Randy Schienle held a rare press conference in Suite Z on Tuesday afternoon.
In a prepared statement, Schienle addressed topics ranging from the Rusty’s bar fight in Bishop involving MLPD officers, to allegations that he’d overseen the shredding of Steve Searles’s employment records.
In his statement, Schienle rebutted what he characterized as “false claim after false claim … So far, every allegation against me has proven to be false.”
“Never have I instructed any member of the police department to be dishonest or withhold information in any investigation. In fact … I have always encouraged all department members to be forthright and honest in their testimony … “
Given the nature of internal policeinvestigations, however, Schienle was unable to shed light on certain issues. For example, he could not reveal what, if any, punishment was meted out to Sgt. Eric Hugelman and Officer Dan Casabian as a consequence of an earlier incident in Las Vegas.
Sheet sources indicate that each officer was docked a day’s pay for the incident.
When The Sheet asked Schienle if, perhaps, the punishment wasn’t severe enough to deter future shenanigans (Rusty’s), Schienle said Bishop couldn’t have been predicted based upon Las Vegas.
Currently, Hugelman and Casabian are on a form of “house arrest.” Though they have been placed on administrative leave (suspended with pay), each is required to stay home from 8 a.m. to 4 p.m. every day and be available during that time.
Schienle said that thanks to school letting out, the school resources officer has been reassigned to the graveyard shift, thus minimizing overtime obligations created by an officer shortage.
Nevertheless, Town Manager Rob Clark said each independent investigation conducted tends to carry a price tag of between $5,000 and $10,000.
Sierra Wave reporter Lara Kirkner inquired about a “tasering” incident which also apparently involved at least one of the above officers.
Schienle said he couldn’t discuss it as this was the subject of an ongoing investigation. Town Risk Manager Michael Grossblatt acknowledged there is current pending legal action against the Town stemming from such an incident.
Overall, however, the crowd was largely pro-Chief, and Councilmember Sklp Harvey and Mayor Wendy Sugimura both showed up as a sign of support.
Sheriff Rick Scholl and Fire Chief Brent Harper spoke on Schienle’s behalf, as did Paul Robles, representing the Mammoth Lakes Police Officers Assn. Johnny Goetz, as President of the Mammoth Lakes General Employees Assn. as well as the Mammoth Lakes Firefighters Assn., offered his 100% support in a public comment made to Town Council Wednesday night.
Retired MLPD Sgt. Jon Boyer created the biggest stir when he lashed out at Councilman John Eastman (who was not present) for apologizing for the Rusty’s incident on behalf of the Town before the officers had received due process.
Turns out Boyer had his facts wrong. Skip Harvey was the one who had apologized.
As for Schienle, he hopes the press conference will help turn the page. “I would like to see the public rally around us. My philosophy is, ‘the closer you look, the better we look,’” said Schienle.