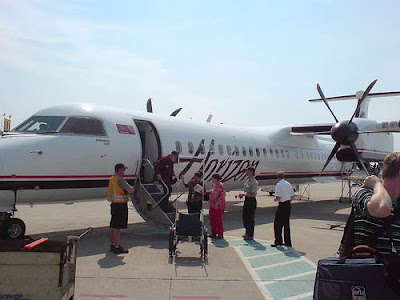 If Mammoth Lakes wants (mostly) year-round air service, it’s going to cost about $650,000 to make it happen.
Mammoth Mountain’s willing to bear half the cost. Whether Mammoth’s Town Council will choose to match ($325,000) is a question that will likely be resolved at Council’s special budget meeting this coming Wednesday at 6 p.m. in Suite Z.
Negotiations with Horizon Airlines have yielded the following proposal for 2010.
Horizon would continue to provide one afternoon flight a day from the end of winter service (Easter, which falls on April 11 next year) through September 30.
The flight would then go on hiatus for six weeks until its resumption on November 17.
Total added service would be 201 days. Mammoth Mountain has agreed to split the subsidy with the Town 50/50.
The subsidy is based upon a 50% load (seat occupancy) factor at $150 per roundtrip ticket.
If the load factor turns out to be just 40%, the Town would be liable for another $100,000 in subsidy. If the load factor is 60%, the subsidy would be $100,000 less.
In addition to the cost of a subsidy, year-round air service would also cost the Town about $100,000 to pay for enhanced security measures required by the TSA (Transportation Safety Administration), and another $41,000 for additional staff.
Mammoth Mountain Ski Area CEO Rusty Gregory said the company is willing to partner on the subsidy, “even if summer really isn’t our revenue period.”
He described this past year’s launch of commercial air service with Horizon as “our most successful marketing initiative, maybe ever.” He thinks the buzz surrounding the venture helped Mammoth break-even in year-over-year skier visits while competing resorts, particularly in Tahoe, suffered steep declines.
Gregory said that MMSA paid no subsidy during Horizon’s first year. The company had expected to pay between $250,000 and $300,000.
Having just sold 40,000 Mammoth Value Passes for 2009-2010, Gregory hopes he has plenty of potential customers to fill even more flights.
He was also optimistic about the extended air service plan, noting that previous commercial operators routinely had their best months in July and August.
Gregory thinks the Town and MMSA should split the subsidy, and was not in favor of a tax on local businesses (through the creation of a Business Improvement District) to help pay the freight.