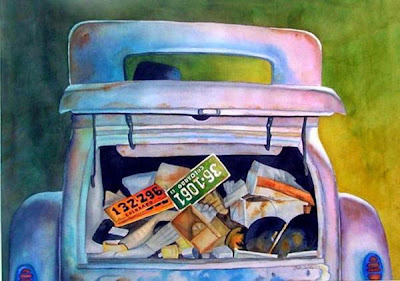 Not the junk in the trunk you were expecting? Well, this is a general admission blog site, so … (ART BY GAIL ZAVALA)

Standard and Poor’s investment rating service has lowered its long-term rating and underlying rating on Mammoth Lakes COPs (Certificates of Participation) by five notches from A- to BB.
Anything rated lower than BBB- is considered “junk.” According to Standard and Poor’s own definition, anything rated BB and below is “regarded as having significant speculative characteristics.”
According to the S&P report penned on June 8 by credit analyst Sussan Corson, “The downgrades reflect our view of the signifcant exposure the Town of Mammoth Lakes is facing as a result of litigation between the town and a developer [Hot Creek, aka Mammoth Lakes Land Acquisition], as well as Town documents that discuss bankruptcy as an important strategy in case of an adverse decision by the court.”
The reason this particularly matters in the short term is because the Town needs to issue $2 million in COPs to pay for the ongoing financing of the commercial airport terminal completed last year.
Last year, the Town spent $55,000 to service the debt. This year, it’s anyone’s guess what debt service might cost.
In May, prior to the rating downgrade, Finance Director Brad Koehn estimated that a one-year rollover of the short-term debt would cost somewhere between 1.5% (~$30,000) and 4% ($~80,000).
According to a longtime bond market specialist on Wall Street whom Lunch happened to go to school with some years ago, “In a current environment where investors crave safety more than yield, it’s not clear that anyone would want to buy double B bonds … at any interest rate.”
Traditionally, said our expert, municipal bonds pay a lower yield than U.S. Treasuries because “munis” are tax-deductible.
This year, however, munis are paying a percentage point higher. “People are scared of munis … and why would you look at BBs when you can get good stuff at high yields?”
Perhaps Town Manager Clark knows all of this, because at Wednesday’s Council meeting, he advised Council to finance the airport terminal via an “Internal loan.”
Finance Dept. Accounting Manager Cyndi Myrold told Council that its current investments, in this recessionary economy, were yielding about 2.5%. Much cheaper to pull that money out and use it to service a loan than to pay what promises to be a much higher rate on a loan.
Town Manager Clark indicated that if the loan weren’t financed internally, that Mammoth Mountain was willing to loan the Town money at LIBOR (London Interbank Offering Rate) plus 3.
According to Mammoth Mountain Ski Area CEO Rusty Gregory, the LIBOR plus 3 agreement was initiially made in April, 2008 to fund the Town’s Airport Improvement Program (AIP) if the Town could find no other means fo finance.
The Town ultimately found another lender.
If the Town wished to borrow money from MMSA today, Gregory said, “We’d have to have a new agreement.” Translation: LIBOR plus 3 is not on the table. Prior to the special Council meeting, no member of Town Staff or Council had approached MMSA about airport terminal financing. To make a statement assuming MMSA would loan the Town money under the same conditions agreed upon in April 2008 is ignorant.
In short, when asked whether or not the Town had approached him in recent weeks about borrowing money to “bridge” the airport terminal financing, Gregory said, “Nobody’s talked to me about that.”
Gregory was quick to say that he would always be receptive to any request by the Town, but let’s face it, Clark made assertions Wednesday night which he had no right or reason to make.
Final point on this. I have a real hard time with the use of the language “internal loan.” An “internal loan” is nothing more than a raid upon the Town’s reserve accounts. They brag about increasing their REU (Reserve for Economic Uncertainty – via sale of real property) account by $1 million while they take $2 million in an “internal loan” to finance the airport terminal project.
It’s a lie. It’s a joke. It’s Mammoth.