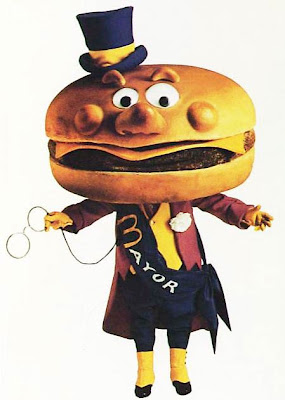 Will the real Mayor McCheese please stand up!

Mammoth’s Town Council approved its 2009-2010 budget at its regular meeting Wednesday.
*Councilman Skip Harvey advised Thursday that the approval was through July 15, pending the condition below.
The approval was based upon one crucial condition; that Town Manager Rob Clark come back to Council on July 15 with $624,000 in spending cuts.
Council passed a $16.97 million budget for the upcoming fiscal year, representing a 9% decrease from the budget approved (though later “amended” because it was so far off) in 2008-2009.
$624,000 in additional cuts would equate to an additional 3.7% decrease.
Council left it to Clark as to how to make the cuts, directing him to bring back several proposals. At least one proposal, at the request of Councilman John Eastman, will not use reserve funds to bridge the gap.
The $624,000 in cuts were recommended by Mountain Travel Research, a 3rd party consultant retained by the Town as part of the agreement made with the taxeater (employee) unions.
The unions made various concessions (primarily involving the institution of furlough days to reduce Town labor expenditures) this spring on the condition that an independent consultant look at the 2009-2010 budget.
Now they probably wish they’d let well enough alone.
In its analysis, Mountain Travel Research found that Mammoth, despite some downward revisions in its budget, was still too optimistic in its forecast.
In particular, Mountain Travel Research found that Clark and Finance Director Brad Koehn had been too optimistic in their belief that the economic numbers will begin to improve by the 3rd quarter (January 2010).
The following are the Transient Occupancy Tax (T.O.T.) forecast averages by quarter for 2009-2010.

The 7% difference in T.O.T. forecasts equates to about a $542,000 difference in revenue.
Likewise, Mammoth’s budget forecast a 3.9% decrease in sales tax revenues, while Mountain Travel Research thought a 5% decline was more realistic. This explains the other $82,000 in revenue adjustments.

Town Manager Clark suggested to Council that a new T.O.T. auditing program would bring in $200,000 in revenue for 2009-2010.
The Town has contracted with the County to perform audits of a handful of Mammoth’s T.O.T.. remitters in 2009-2010.
The cost: $10,000.
The expected return: 2,000%
*No wonder these guys can’t budget worth a damn.
The reasoning behind the expectation, said Clark, is simple. The County, he claimed, recovers $80,000 every year from its audit program. Given the Town has three times as many remitters, Clark assumed three times the revenue.
Only one problem.
It’s unclear what the County spends per year on its audit program, but the $10,000 the Town has paid for contract services will only yield “3 to 4” (later adjusted to “4 to 5” audits by Town Finance Dept. Accounting Manager Cyndi Myrold) audits.
Which equates to about 1% of Mammoth’s total (411) T.O.T. remitters.
According to Myrold, about 340 of these remitters are small-time quarterly remitters who own 1-2 properties, and about 70 are commercial remitters.
Wouldn’t the reasonable expectation, therefore, be to collect 1% of what you proposed to audit?
*1% of total 2007-2008 T.O.T. receipts (the last full fiscal year on record) = $92,000.
Or, as The Sheet pointed out to Council, if the County indeed recovers $80,000 for every $10,000 it spends on its audit program, shouldn’t the Town expect the same efficiency ($80,000 as opposed to $200,000 in recovery).
Still an 800% return, FYI.
Clearly, felt The Sheet, Town Manager Clark was exaggerating the effectiveness of an audit program to avoid having to make difficult, additional budget adjustments.
Town Council ultimately agreed.
As Councilman Skip Harvey said, “Let the program run for a year until we see the [actual] revenue.”
Therefore, the $200,000 Clark had budgeted as revenue was removed, altering the cuts he’s required to make from $424,000 to $624,000.
*May The Sheet note that the only reason Mayor Sugimura went along with this was due to the realization that she knew she didn’t have the votes to fight it. She indicated she wanted the Town to budget some revenue number in association with the audit program.
In terms of property tax revenue, Council affirmed Staff’s suggestion to budget property tax revenues at a 1% increase.
Then Council moved onto 31 separate budget policy decisions as outlined by Staff. The only budget reduction it seemed to agree on (opposed by Skip Harvey) was the desire to not hire a part-time Animal Control Officer at a cost of $20,000.
When The Sheet approached the podium to comment that Council’s blanket approval of Staff’s proposed policy decisions (each preceded by an announcement of the Citizen Committee’s vote on each item) amounted to a rubber-stamping of past political practices, Mayor (To Be) McCheddar’s response was, “I vehemently disagree.”