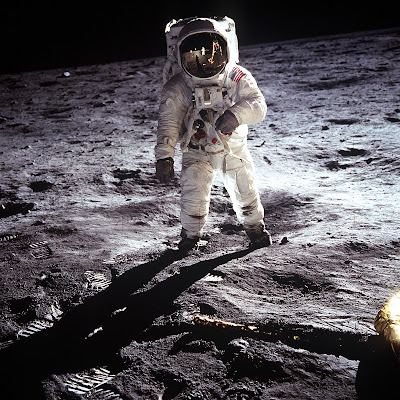 Aldrin may have been the second guy to walk on the moon, but then again he was also the model for the MTV Awards “Buzzy” statue. Photographed by Armstrong.

It was 40 years ago this week. Do you remember where you were? Maybe you’re too young, but if your idea of “moonwalking” involves the late Michael Jackson, you might want to read up on the exploits of a dude named Neil Armstrong, whom I think you’ll agree is the ultimate “moonwalker.”
On July 16, 1969, the astronauts of Apollo 11 — Armstrong, Buzz Aldrin and Michael Collins — left our planet as mere men. A few days later, on July 20, they entered the history books alongside great names such as Columbus and Magellan. On that day, while Collins stayed behind in the command module, Armstrong and Aldrin, became the first people to set foot on the moon. It was the culmination of what could arguably be called mankind’s greatest achievement, certainly of the modern age, and possibly of all time.
Aldrin described the lunar surface as “magnificent desolation.” How men came to witness that “desolation” firsthand is the stuff of legend, the handiwork of thousands of people, most of whom never knew each other. On May 25, 1961, President John F. Kennedy gave his now famous speech before a joint session of Congress, essentially commiting the United States to “landing a man on the moon and returning him safely to the Earth” by the end of the decade. Anxious Americans held their breath.
But Mammoth Lakes Planning Commissioner Jay Deinken thinks that if you want to know when we decided to make the voyage, you have to go back a few years earlier, into the earlier stages of what became known as “the Cold War.”
Following the division of Europe by the U.S. and Russia at the close of World War II, both countries started putting the captured Nazi rocket scientists to good use. Initially developed for military applications, the rockets the U.S. team came up with quickly became capable of reaching the very edge of space, a goal top rocket engineer Wernher Von Braun had always envisioned, even while working on Adolf Hitler’s V-2 ballistic missile program.
By the 1950s, tensions mounted between the two ideologically opposed superpowers, as both were neck-and-neck in a “space race” following development of the hydrogen bomb by each country.
Then the Soviets took the lead. On October 4, 1957, the Russian-made Sputnik 1 became the first artificial satellite in Earth’s orbit. The event, a source of pride to the Soviets, came as quite a shock to the Americans … to say the least.
“It scared the hell out us,” recalls Deinken, who was 10 at the time. “I remember it well. It was all over the news, all we talked about in school. I mean the country was actually afraid of being taken over by the Russians.”
In retrospect, Deinken said he thinks it’s likely that, while President Kennedy make going to the moon seem more grandiose on the surface, there was another, more subtle reason behind the call to action.
“Fear,” Deinken said. “It’s pretty basic when you think about it. We were trying to one-up them, but the real reason we went to moon was a very tangible fear of Red domination.”
Deinken would later experience the effect of the Cold War up close. After getting his B.S. in physics and mathematics, he would spend four years in an underground Arizona silo, living next to live missiles with “the real thing” mounted on top, as a missile combat crew commander in the United States Air Force.
Ironically, when all was said and done, there never was a “Red moon.” The Russians led the Space Race until 1968, when the U.S. finally pulled ahead with the Apollo program. After several failed attempts at producing a launch vehicle capable of making the trip to the moon, the Russians gave up in 1974, having never landed a single cosmonaut.
On December 19, 1972, Harrison Schmitt and Gene Cernan, the last American astronauts to walk on the lunar surface, finally returned home. No one from Earth has been back since, but interestingly enough, we may soon be returning there. Even more curious are the parallels between the moon programs of yesterday and today.
For starters, the Cold War may be long over, but relations with the Russians are the chilliest they’ve been in years.
In the 1960s, the U.S. was in Vietnam while the Apollo missions were getting underway. Today, there’s a “war on terror” in the Middle East as work progresses on the Orion program, the centerpiece of NASA’s Project Constellation, which plans to send human explorers back to the moon by 2020, and then onward to Mars and other destinations in the Solar System. Even the exterior design of the Orion capsule bears more than a passing resemblance to its Apollo forerunner.
In any case, this milestone celebrates a moment in human history. No matter what we do or where we go from here, July 20, 1969, will always be significant as the day we took our first steps off of this world and out into the cosmos.
A photograph of Aldrin’s footprint in the lunar surface is perhaps one of the world’s greatest historical documents, proof that sometimes a picture really is worth 1,000 words. With the exception of the following inscription on a plaque left on the moon by the Apollo 11 crew that equals its power perfectly: “We came in peace for all mankind.”
Thanks to Jay Deinken for his recollections and observations of that unique and exciting period.