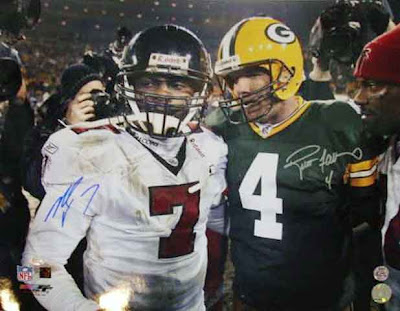 Brett Favre. I told you that loser would eventually screw somebody over. You know who could be the smartest bunch of people involved in this sad saga? The Packers. They wanted to prevent what just happened … planning for him to come in, disrupt the whole team and then back out at the last minute. Favre is an attention whore. And everyone should ignore him. Now the Vikings have been Favred. They bet it all on his coming back. They courted him and allowed him to do what he wanted. Now they have to go back and try to glue the team back together. Just this week, Favre came out and said, “Maybe by November.” What?! And the team is supposed to … what … wait for him in November? They should tell that jackass to piss off and ask Kiln Mississippi High School if he can play for them.
The Vikings look weak and desperate to me. What a sorry organization. I hope QB Tarvaris Jackson has a huge year and they still lose and he tells them to kiss his booty on his way out the door.
WR Braylon Edwards showed up to camp a day late for the Cleveland Browns and then failed his physical. I can understand that. He is a veteran and beat up. He has been in the league, what, a whole two years.
And the Baltimore Ravens are thinking about Michael Vick. So are the Kansas City Chiefs. Desperation. Look, I said it before: he went to prison, and he is a sorry quarterback. He’s also been in jail for 2 years, so he will be sorrier than before. And we haven’t seen him run a route or run back punts or kicks. I wouldn’t sign him. Sometimes you have to just walk away. I wouldn’t want the headache.
I am surprised, however, that the Raiders haven’t offered Vick a 4 year, $50 million contract. Hell, they threw money at Tommy Kelly and Darrius Heyward-Bey. Why not Vick? I am sure somewhere in Lemony Snicket’s (Al Davis’) twisted mind he sees visions of the Raiders of the 70s and wants Vick. Another outcast. Hell, send him to the Bengals. They’ve got so many convicts at their games they have a police holding cell at the stadium.
Plaxico Burress testified today in his own case. What do you say to a grand jury when you are Plaxico? “I was wrong and I apologize to everyone I hurt. I apologize only to myself cause I SHOT MYSELF IN THE LEG. I AM A MORON. I SHOT MYSELF AND AM ON TRIAL FOR IT.” Seriously, WTF?
Fantasy Football is back. And there is a Fantasy Insider or Fantasy Cheat expert everywhere. One of their favorite things is “position battles.” Here is the key: if a player is in a “position battle” for a starting job, then HE AIN’T GOOD ENOUGH TO DRAFT. DON’T BE A DUMBASS.
In baseball, the Pittsburgh Pirates made some trades this week. And after they made the trades, 8 of the 9 opening day starters for the team were on the rosters of other teams. Now THAT is pitiful. They aren’t even trying to field a competitive team. A brand new field and revenue sharing and they aren’t even capable of putting a high school team on the field.
Finally, a driver of a car in Connecticut he was having an unusual problem. He was driving and veered off the road and wrecked up some parked cars. His excuse: he had pet snakes in his pocket. They escaped and while he was trying to retrieve them he wrecked. Now that is a story for you. The most elusive and dangerous trouser snakes in history.