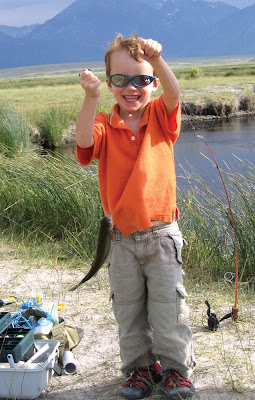 Leonard’s nephew, Shea, on the Upper Owens, showing off a trout he hooked with some Powerbait. (Photo: Leonard)

We’re halfway through August, which means the local kids are getting a little more restless about returning to the hallways of higher learning.
As enlightening as an education may prove to be, I can’t really fault them for their ambivalence, as the fishing this time of year is incredible.
For the “lucky” souls who return to my classroom in a couple of weeks, there is a good chance I’ll be raising trout again on-site. If I can no longer GO TO Crowley at 10 a.m., I’ll work my hardest to BRING the lake into the old middle school building. Compromise at its best. Truth be told, I like being in the classroom as much as I like fishing, and there is no reason why I can’t simultaneously have both. I can practice my fly casting from my desk, aiming into a 50-gallon tank 20 feet on the side of the other classroom with my 2-weight rod. Don’t tell Dept. of Fish & Game I’m actually fishing for the small fry I raise in the tank in Mammoth High School!
The 3rd annual Stillwater Classic at Crowley Lake turned out to be a huge success! The fishing was a little slow during the contest, but Lane and Beth Garrett once again hosted what is easily one of the most entertaining fly fishing tournaments in the Eastside, and they raised thousands of dollars doing so, all to better stock the quintessential California trout lake. Ryan McDonald earned the title “Lord of the Fly.”And we’re not taking about Nobel-prize winning author William Golding; that’s for the 9th grade English class at MHS to dissect. The only “cold war” going on at Crowley was McDonald pitching whatever midge, perch fry or damsel pattern he secretly held in his arsenal to beat out 2nd place winner Josh Koch and bronze medalist Mark Saito. Not to go home without a bit of Sierra gold, Saito took 1st with teammate Frank Murata for team class. It was a pretty fun day on the lake. As for heading out on Crowley now…
The angling for fly fishing is best in McGee, and Big and Little Hilton. McGee is hitting the hardest with various midge and emerger patterns in about 12–15 feet. Blood red for the midges, grey for the emergers. Little Hilton is hitting in about 7-13 feet with the same patterns. You can certainly kick around Crooked or The North End with a sink line and various streamers to pull out plenty of big, healthy browns and bows.
Some of the lake fish are starting to move into the Owens, definitely worth noting if you want to get on some running water. Fishing conditions on the Upper Owens River are picking up again. Traditional dries like Elk Hairs, Stimis and Parachute Adams will land you trout. Bait anglers are still Gulp!-ing the daylights out of them with Gulp! dough bait and nightcrawlers.
Though, it’s just as easy to throw the trout back and go get lunch at One World Eats as it is to keep, clean and cook the fish. Not to mention the kabobs and pilaf at the new joint are pretty dang good.
Bait angling is closed on Crowley, but trollers pinching down barbs will get at some great trout on Crowley now. Lane tells me that Taz Devils are the lures of choice for getting at the bigger fish. Get your lures down in the deeper water where it´s cooler.
Head up to the North End to look for some of the lake fish moving into The Owens. If you really want to have some fun, call Don Meier at Kittredge and book a trolling trip on Crowley. Good family fun.
It’s only going to get better at Crowley. Lane Garrett predicts an “epic fall” as less anglers were on the water during the June storms, fewer fish were harvested this season, and as of now, lots and lots of trout in the four- to five-pound range are coming ashore … could be a good sign of times to come. Keep in mind when school is in session, the big trout move all over the Eastside during September and October.
Another body of water that has been simply producing bent rod after bent rod is Bridgeport Reservoir, definitely worth attending for a day. I’ve heard nothing but stories of successful fishing on the Bridgeport Rez.
So, as we approach the kickoff of college football season, and kids all over the country head to their local office supply stores (buy locally owned at Access and Mammoth Business Essentials), and the lake fish start to move around, it only means bigger and better fish being caught.
Kids, my advice to you at this point in the summer, get your heads ready to do some homework. Meanwhile, your prep for the school year … get out there and fish during the morning hours while you still have the chance, because it won’t be much longer before we’re looking at the differences between adverbs and adjectives, as opposed to brooks versus bows!
Read a more detailed version of Chris Leonard’s report at http://kittredgesports.com/fishing_report.php. Leonard guides for Kittredge Sports. Call 934.7566.