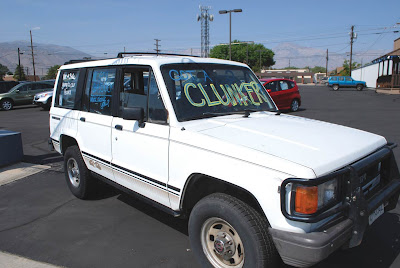 Okay, we admit the caption’s just too easy … “Too much junk in the clunk?” … but we had to go for it. You understand … (Photo: Fredericksen)

Am I the only taxpayer in America who’s annoyed by the federal Cash for Clunkers program? Let me get this straight. If I were lucky enough to own a crappy enough car at the perfect time, I could get all my fellow taxpayers to subsidize my new car purchase. Great. Just one catch. My 2000 Subaru with 127,000 miles isn’t clunky enough. Neither is my wife’s 2001 Chevy Tahoe with 160,000 miles.
But I know many of you are sick of listening to me whine week in and week out. Besides, our intern Devon Fredericksen is leaving this week for Bellingham, Wash., where she will graduate from Western Washington University on Aug. 22 and I wanted to milk her for one more story before she left, so what follows is her local report on the Clunkers program:

Darci Jahn, program administrator for Perry Motors in Bishop, says the program has generated more interest in the Eastern Sierra for fuel-efficient cars. She said a lot of her customers have traded cars with 12 MPG and bought cars with 50 MPG. So far, 25 people have taken advantage of the program at Perry’s, with the most popular cars being the Toyota Prius and Corolla, and the Honda Fit and Civic.
Although $4,500 knocked off a new car makes a lot of people happy, the switch from old to new can sometimes take some adjustment. Bishop resident and “Clunkers” customer Marsha Tucker has experienced some buyer’s remorse since she swapped her 1999 Toyota four-wheel drive SUV for a Honda Element all-wheel drive.
“I miss my gas guzzling car,” Tucker said. She was used to taking her old car off-road all the time, and the new car does not seem as indestructible on the unforgiving bumpy dirt roads in the area.
Despite the small regret some customers might have, cars have been selling like crazy at local dealerships. Jahn said the stock of fuel-efficient cars at Perry’s right now is low. She said it’s the lowest she’s seen in these models in her lifetime of participation in the family business.
“I’ve never seen such excitement,” Jahn said. “It looks like it did before the recession.”
However, such interest means there aren’t a lot of choices for new prospective buyers since automotive manufacturers aren’t producing cars this time of year. There is a lot of interest, but no product. However, Jahn said Perry’s still has a lot of cars that qualify for the program in the lot.
The “Clunkers” program has generated both positive and negative interest since its inception. Jabs for and against the program have been made since word of it first reached the street. Last week, CNNMoney.com called the CARS (Car Allowance Rebate System) “real stimulus,” while the more conservative Wall Street Journal labeled it “crackpot economics.” Which is it? Let’s take it for a test drive and find out.
Some economists are saying the program has not increased auto sales in the long-term, but rather has only shifted sales from the future to the present. Buyers who were already planning on purchasing cars just bought them sooner rather than later. Tucker said had already decided she needed to buy a new car last year, when she realized how much maintenance her Toyota was going to take. She said hearing about the program just accelerated her decision.
“It was a big motivation to get a new car now; someone just handing you $4,500,” Tucker said.
Whether CARS is simply shifting sales or initiating a growing trend in sales, economic advocates for the program claim the stimulus is sweeping money into an industry that needs it now more than ever.
However, skeptics also argue the clunker program is just prolonging our dependency on foreign oil and cars rather than alternative forms of transportation. Although touted as a program that will help the environment, “Cash for Clunkers” may not have as much of an impact as some people are led to believe.
Some climate experts are saying CARS is not an effective solution for reducing CO2 pollution contributing to climate change. In an article by Seth Borenstein, AP science writer, he wrote that, “….shutting down the entire country—every automobile, every factory, every power plant—for an hour per year” would have the same effect as “Cash for Clunkers.” To climate experts, this is an incredibly insignificant decrease in CO2 emissions.
Borenstein wrote: “Environmental experts say the program—conceived primarily to stimulate the economy and jump-start the auto industry—is not an effective way to attack climate change.”
The demand for clunkers by car salvage businesses is also low. According to an article in the Miami Herald, engines make up 40 percent of the salvage value of a car, but the program has made it so that the engines from clunkers cannot be resold, making it unprofitable for some businesses to make bids on clunkers to salvage the rest of the parts. When a customer turns in a “clunker,” the dealership pours sodium silicate into the engine to kill it.
“The idea is to get these cars off the road,” Jahn said.
Although some junkyard operators are taking advantage of the program, for many, the paperwork and the time it takes to take apart the cars is not worth the small profit.
In a Society of Environmental Journalists email, environmental reporter Muriel Strand said that perhaps a more environmentally focused program would give people money to afford the bike of their choice or public transit tickets.
Some of the rules …
* Your vehicle must be less than 25 years old on the trade-in date
* Only purchase or lease of new vehicles qualify
* Generally, trade-in vehicles must get 18 or less MPG (some very large pick-up trucks and cargo vans have different requirements)
* Trade-in vehicles must be registered and insured continuously for the full year preceding the trade-in
* You don’t need a voucher, dealers will apply a credit at purchase
* Program runs through Nov 1, 2009 or when the funds are exhausted, whichever comes first.
* The program requires the scrapping of your eligible trade-in vehicle, and that the dealer disclose to you an estimate of the scrap value of your trade-in. The scrap value, however minimal, will be in addition to the rebate, and not in place of the rebate.

To close out, a few random notes. First, look for a public meeting of the Tourism and Recreation Commission meeting sometime during the next two weeks to discuss the bikes v. boards skatepark dilemma. The Commission is still seeking to determine whether or not a compromise can be fashioned to satisfy user groups.
Second, it appears that Mammoth Dog Teams has been locked out of its (former?) home at the Sheriff’s substation off U.S. 395. Mono County Public Works Director Evan Nikirk was unable to return a call by press time and Jim Ouimet of Mammoth Dog Teams has no comment until he learns more. -Lunch