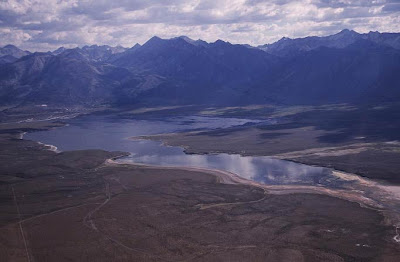 An aerial view of Crowley Lake. The popular fishing destination didn’t exist before 1941. It was created by the Los Angeles Department of Water and Power (DWP) as storage for the Los Angeles Aqueduct and for flood control. (File photo.)

The title for the statewide library event “Uncertain Waters” — a community-based discussion of California’s water priorities, to be hosted locally by the Mammoth Lakes and Bridgeport Libraries on Tuesday, Sept. 1 — is fitting, for multiple reasons.
Tainted by a water history steeped in political tension, California has always treated water issues with an air of uncertainty. What to do with water has been an age-old controversial question, influenced by the interests of politicians, engineers, environmentalists and tribes. Over the past century, engineers have developed water projects to cork, dam, divert, trap, and transport almost all water bodies in the state. As a result, battles over water rights have left many communities drowning in bitter, eternal grudges.
However, in response to the current drought — and to predictions for total loss of Sierra snow pack by the end of the century due to climate change — the event, “Uncertain Waters” is meant to encourage people to put the past behind them in order to discuss the public’s most pressing water priorities. In association with the Water Education foundation, California libraries, including Mammoth Lakes and Bridgeport, are hosting non-partisan teleconferences to facilitate public dialogue about the state’s water issues.
It is uncertain, however, what the goal of the event is. “Less talk, more action” does not seem to be the aim of the conference. In fact, organizers of the event aren’t expecting the evening to inspire community members to take action. Rather, the main purpose of the event is to educate the public on different approaches to water conservation and to encourage discussion.
Despite the lack of direct policy-changing effects, evennt orgaanizers encourage the public to at least come to learn about California’s biggest water challenges. If anything, the evening will hopefully prove inspiring and generate further conversation within the community, said Ana Wells, the branch support librarian in Mammoth Lakes and coordinator of the event.
“It’s a chance for the community to have an open dialogue about the state of water in California, but more specifically in Mono County,” Wells said.
One of the most important concepts to glean from the discussion, said locally-based state water expert David Carle, is to understand how all people are connected to each other by this one resource. Carle, author of two books about California’s water, said some people might not recognize that communities thousands of miles away from each other can be using the same reservoir to extract water. He said people should understand that everyone must waste less water, at the individual level, in order to reach California’s water conservation goals.
As California’s “liquid gold” — the lifeblood of both the economy and the public wellbeing — water is an invaluable resource. It is also finite. “Uncertain Waters” will allow residents of Mono County to discuss local issues, as well as state issues such as building a peripheral canal, how to spend the remaining $2.6 billion of the 2006 state water bond, water storage projects, Delta levees, desalination plants, water recycling, flood management, water rights, and food production.
Craig Paterson, a state water expert, will lead the discussion via videoconference between Mammoth Lakes and Bridgeport. David Carle will provide the introductory speech from Mammoth. The videoconference equipment will enable community members to communicate between both towns. The discussion will begin at 5:30 pm at both locations on Tuesday, Sept. 1.