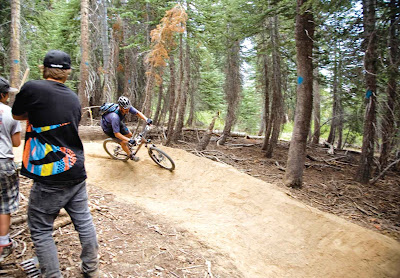 On the high seas, an “S.O.S.” isn’t code anyone wants to send or receive, but Friends of the Inyo’s (FOI) “Summer of Stewardship” isn’t about distress. It’s a call to action for volunteers to help accomplish what might otherwise be neglected in this age of budget cuts and recession.
FOI’s Paul McFarland has recently been trumpeting one statistic that’s been resonating in the community: park visits, particularly those to the Inyo National Forest, are skyrocketing to record highs. Meanwhile, funding for rangers and upkeep is declining.
In its second year, S.O.S. is funded through a National Forest Foundation’s Ski Conservation grant, made up of donations from Mammoth Mountain Ski Area guests and the sale of MMSA Value Passes. The grant award allows FOI to subcontract a partnership with Mammoth Lakes Trails and Public Access. It also covers the cost of two Lakes Basin “stewards,” who are essentially “rangers” only minus the formal title.
FOI has the on-the-ground trailwork experience, but MLTPA has the activist base and strong local presence to help engage other users groups, such as Mammoth Trails, High Sierra Striders, the Sierra Club and many others.
The first event on June 6 (National Trails Day) was projected at 20 volunteers … 25 came out to lend a hand.
FOI and MLTPA hope to get at least that number for the fifth event on Sept. 12 at Convict Lake, a tie-in with the statewide Coastal Cleanup Day. In that spirit, the event will have a shore cleanup component along with trails work. Convict Lake Resort is one of the co-sponsors and as a carrot to entice volunteers, its restaurant will provide lunch! Local businesses — such as Roberto’s, Footloose – and local masseuses including Michelle Mather and Melanie Reedy – have also been generous in donating raffle prizes. Meet at Convict Lake at 8:30 a.m. to join in the fun..
This year’s S.O.S. program wraps up on Sept. 26 with some trail work and winter prep at Inyo Craters. More info: 873.6500 or www.friendsoftheinyo.org.