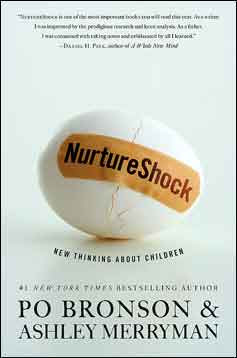 Nurture Shock is the latest in a spate of books (Freakonomics, The Tipping Point) where, academic research, when placed in the hands of a pair of great writers and synthesizers of information, suddenly becomes not only readable, but fun.
The subject matter tackled in this new release by Po Bronson and Ashley Merryman is one that has a universal audience; childhood. Along the way, you can blissfully learn about the all the ways you’re unintentionally screwing up your kids, and all the ways your parents did the same to you!
As Bronson and Merryman write in their introduction, nurture shock, as the term is generally used, refers to the panic – common among new parents – that the mythical fountain of knowledge (parenting instincts) which are supposed to magically kick in at childbirth are not, in fact, kicking in.
“This book will deliver a similar shock – it will use the fascinating new science of children to reveal just how many of our bedrock assumptions about kids can no longer be counted on.”
To sample a few parts, chapter one tells us that praising for intelligence, as opposed to effort, may backfire. If you keep telling Johnny how smart he is, it may make him less able to handle failure. As Dr. Carol Dweck finds in her research, “Emphasizing effort gives a child a variable that they can control. Emphasizing natural intelligence takes it out of the child’s control … and provides no good recipe for responding to failure.”
The second chapter talks about the importance of sleep, and notes that children today get one hour of sleep less per night than they did thirty years ago.
“Because children’s brains are a work-in-progress until the age of 21, and because much of that work is done while a child is asleep, this lost hour appears to have an exponential impact on children.”
To counter this loss of sleep, school administrators in Edina, Minn., pushed back their high school start times from 7:25 a.m. to 8:30 a.m. Believe it or not, corresponding SAT scores for the top 10% of Edina’s 1,600 students went from a combined 683/605 to 739/761. That’s a 212 point increase.
Other chapters touch upon the much-heralded DARE program (which statistically has no effect on whether or not kids use drugs) as well as how often your kids generally lie to you (very). Research finds that 96% of teens lie to their parents. If you think your darling honors stduent doesn’t lie to you, think again. Their numbers are virtually the same. And by the way, being the cool, laid-back parent means they’ll probably lie to you more.
Nurture Shock has a neat little revelation on every page to keep you interested, For a copy, visit The Booky Joint in Mammoth.