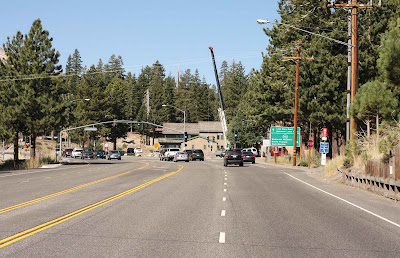 A shot looking up Main Street taken during the Mammoth Crossing height demonstration. The balloon at the top of the crane is supposed to represent a height of 90’. (Photo: Thies)

Two weeks ago, Mammoth Crossing developers conducted a height demonstration at the intersection of Main and Minaret to show how the height of their proposed development may impact surrounding neighbors and views.
The general response was less than enthusiastic.
Of the many letters inspired by the height demonstration which were written to the Town Council and Staff, John Humberstone’s was typical. Humberstone, who lives in Garden Grove but describes himself as a 40-year visitor to Mammoth Lakes, began his letter to the Mammoth Lakes Town Council this way:
“I recently wrote to you about my concerns with respect to the introduction of high-rise housing to Mammoth Lakes. I expressed my concern that changes in approach would irrevocably change the ambience of Mammoth.
I have now seen the balloon test that demonstrated the height of these buildings.
Are you out of your minds?”
The answer delivered by Council this past Wednesday was an apparent ‘yes.’
The Mammoth Lakes Town Council voted unanimously to make amendments to the North Village Specific Plan and General Plan which will allow for increased height and density on the “three corners” of Main and Minaret.
The height demo showed 90’ on site 1 (Whiskey Creek) and 85’ on sites 2 & 3 across the street (to the south).
The amendments allow for the possibility of 83’ on site 1 and 78’ on sites 2 & 3.
The base maximum (which is a weird but appropriate term) is 70’ plus 3’ for appurtenances.
The extra 10’ would be allowed provided there is a peer-reviewed CAD drawing which could demonstrate negligible impacts from that additional height.
As for density, 48 rooms/acre will be considered the base density with allowances for up to 80 rooms/acre in exchange for “community benefits.”
In terms of height, it’s been interesting to see how the term “Village in the trees” continues to be interpreted. Does that mean the Village is nestled below the trees, among the trees or looking up at human treehouses? Community Development Director Mark Wardlaw said the tree canopy in and around the Mammoth Crossing site is between 67-75’ in height, although the Whiskey Creek site only has three trees.
Councilmember Skip Harvey said a last-minute peer resort tour to Tahoe showed that the maximum height of any building was about five stories. He advocated 60’ with another 10’ for appurtenances.
Councilmember John Eastman said architecture is way more important than height and pushed for a larger height envelope to give the architect leeway.
Ultimately, Council largely settled on a compromse crafted by Tom Moody, a local resident who recently founded the Mammoth Alliance of Property Owners Assn. (MAPOA). Moody became active in local politics during the debate over the Clearwater (now renamed Old Mammoth Place) project. Moody, a neighboring property owner, and others objected to the height and mass of the proposed development. Ultimately, a compromise was fashioned which allowed Old Mammoth Place a 55’ maximum height.
For the Crossing, Moody suggested 70’ at the Whiskey Creek site and 65’ at the other two sites.
Mammoth Crossing’s Doug Regelous was more than happy to seize on these numbers. “If you say 70 feet, so be it,” he said. “We’re not stuck on 90.” In fact, he said, Mammoth Crossing didn’t need to go above 55’. “Height is a function of aesthetics, not need,” he added.
At the conclusion of his remarks, however, he tossed out 70, 75 and 80 as a range of acceptable numbers – numbers he received.
McCarroll said he could favor the Moody compromise, and added the caveat about 10 more discretionary feet with Council approval.
When The Sheet asked Moody during the bvreak how he came up with his numbers, he said, “You’ve got to compromise.”
Sheet: What height maximum would you really like to see at Mammoth Crossing?
Moody: 50 feet.
Angela Olson made the most eloquent arguments in support of amendment changes to facilitate a project. “There are those who worry about losing their views. I worry about losing my job … Sacrifice is sometimes necessary for the greater good, and beauty comes at a price.”
She said those who stand in the way of progress are precisely those who make but a minute contribution to the Town.
John Walter of the Advocates for Mammoth, property owner Andy Ott and others said they’re not anti-development so much as for the right development. As Ott said, “Tourists come for the ambience, not for big buildings. That’s the last thing they want.”

From Lunch’s perspective, the oddest part about the whole meeting was the general lethargy. If someone had told me this Council would have even suggested heights above, say, 65’, I would have predicted a brawl reminsicent of Taiwanese congressional deliberations. Instead, those in opposition sat in general silence as it became clear what would happen.
Afterwards, John Walter said it is of little wonder why Planning Commission has been reduced to irrelevancy. “Neil [Mayor McCarroll] and [Councilmember Bacon] Jo still seem to think they sit on Planning Commission.”
Meanwhile, Tom Cage (who was unable to make the meeting) wondered about the precedent-setting implications of the Council decision, and how this would affect PAOT (People At One Time) and water supply.
Councilmember Harvey was already remorseful of his vote by Thursday morning.

Seeing as I spent way too much time in Suite Z on Wednesday morning and afternoon, I left the evening Council meeting to Wolf, who filed the following report:

“There still hasn’t been any sighting of Blondie,” stated Mammoth Wildlife Specialist Steve Searles,” to a packed Town Council audience Wednesday evening, an audience eager for information. However, Searles was hesitant to say too much pending the bear-focused agenda item slated for the Oct. 7 Town Council meeting. As Searles addressed the Council, he appeared disheartened that he “hasn’t been briefed on anything other than what (he’s) read in the papers.”
Searles reminded the Town Council that it is hunting season and unfortunately the Department of Fish and Game historically hasn’t shared information on hunted game in the area with town officials, “perhaps that is a dialogue that needs to be opened.”
The Wildlife Specialist also reported that the number of calls on bear sightings has decreased dramatically as of late, but added the dropoff could be related to the fact that the bears are at their ideal weight and getting ready for hibernation.
There was also speculation from Searles that since the shooting of the sow and her two cubs there may be distrust throughout the community with the system. “If a person had a bear in their bedroom they probably would hesitate to call.”
Proof of this concern was evident not only with the high volume of attendance, but also with a few concerned locals who ignored the fact that the official meeting of the issue is on Oct. 7 and decided to voice their concerns anyway.
Marianne O’Connor of Bear-With-Us claimed the situation is no longer about bears but politics as she implored the Council to appoint her to the Wildlife Subcommittee. After Searles spoke his mind and the public comment was closed, the majority of the public vacated suite Z.
In Town financial news, Finance Director Brad Koehn said July was the second biggest month for T.O.T. (Transient Occupancy Tax) revenue in the Town’s history. Of course, that number does not take inflation or tax rates (which increased from 12 to 13% in October 2007) into account. There was also zero information regarding occupancy and/or room rates.
In other words, were rooms discounted to drive business, killing margins for proprietors yet still feeding the General Fund (taxeaters)? From Koehn: “Although the July 2009 TOT is 3% less than July 2008, when compared to all of the prior Julys, it is the second highest July collection of TOT in the Town’s history.”
The Lake Mary Road project is being restored to its initial scope, as the local Forest Service scored with American Reinvestment and Recovery Act funds. Don’t, however, expect any further work to be done this fall.

But wait, there’s more … Geisel’s got some Council briefs …

Stand up and be counted!

Local Census Officer Rebecca Garrett briefed the Mono Supervisors with information about the 2010 Census and about efforts to create partnerships, promote awareness and increase participation. Garrett said she’s in the process of canvassing the area to hire census workers, and is focused on streamlining the process, aware that her work could have a significant impact on future state funding.
Garrett thinks this year’s form is considerably shorter (or as she put it “less frightening”), and will significantly boost the return rate. A follow up campaign will be done door-to-door with census takers using handheld computers.
The official census date is April 1. Garrett said the new and improved form asks for name and age, how everyone in the house is related and whether the head of household owns or rents. All forms in Mono County are scheduled to be hand-delivered to a main home address, NOT to a P.O. Box.
Census messages are planned to be included in utility bills, and displayed as signage on town buses and on websites. She is further working on putting together a Complete Count Committee (CCC), ideally made up of volunteers representing a cross-section of the community, including local leaders. Supervisors suggested that talking to Town of Mammoth Lakes leaders, and getting her CCC message heard by Regional Planning committees in the various districts would be to her advantage.
Any interested parties can contact Garrett about the Committee at rebgarrett88@gmail.com.

Board of Supervisors to teleconference?

Twitter your friends and update your Facebook pages … Mono Supes are preparing to go high-tech, discussing a potential policy about teleconferencing its regular Board meetings. Staff in Mammoth with other pressing business in town could participate in meetings without having to make the drive to Bridgeport, especially during winter months when inclement weather poses travel problems. Supervisors could also use the Mammoth facility, provided the meeting is noticed and also open to the public, as per provisions in the Brown Act.
It may also consider streaming them live on the County’s web site and posting “YouTube”-style recordings of them for later viewing.
Supervisor Byng Hunt liked the idea of being on the “cutting edge” and saving “gas, wear and tear, and risks associated with winter travel. Chair Bill Reid wasn’t against employing the underutilized technology, but said he’s admittedly “old school” when it comes to meetings. “Snowstorms and those types of issues are fine, but you lose something if you’re not in the room,” Reid opined.
Issues yet to be decided include whether or not to broadcast partial or whole meetings, and how it would affect staff reports in both Bridgeport and Mammoth. An internal demonstration is planned for the Board’s Oct. 3 meeting. If that goes well, a public test drive could happen as early as the first meeting in November.