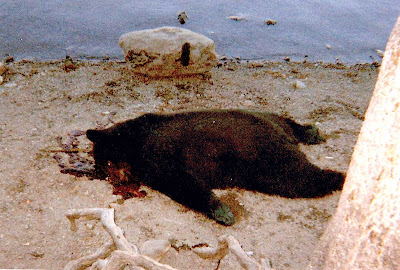 A four-year old female bear was shot and killed by a 58-year old San Bernardino man at Lake Mary on Tuesday evening.
California Dept. of Fish and Game Lt. Marty Markham told The Sheet the shooting occured at approximately 5 p.m. on Forest Service land. Markham said the man was picnicking with others when a black bear approached.
The picnickers retreated to their car while the bear soon began feasting on their food left near the shoreline. An unidentified person managed to haze the bear away, but after the group returned to the picnic, the bear returned once more.
This time, the man, apparently concerned about several “items” at the scene, retrieved a “large caliber handgun” and fired a single shot from approximately 20 yards away, killing the bear.
Mammoth Lakes Police initially responded before handing the situation over to DFG.
An investigation is ongoing and witnesses are still being interviewed, Lt. Markham said. The shooter’s name is being withheld until it’s determined whether or not charges will be filed with the Mono County District Attorney’s office. Markham added that a final report on the case should be ready in “a few days.”
According to Mammoth’s Wildlife Specialist Steve Searles, there were clear sightlines up and down the shore providing ample warning of bears who might be approaching in either direction.
A dead bear cub was pulled out of Lake Mamie the same day. Mammoth Lakes Police Chief Randy Schienle said the deaths are unrelated.