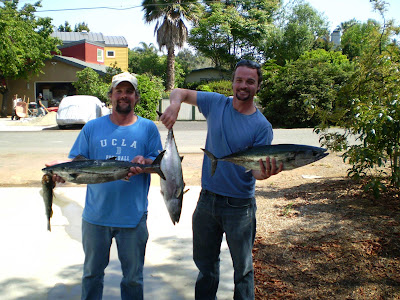 The Leonards, Chris and brother Scott, with some of Mono Lake’s finest. (Photo courtesy Leonard)

Here we are at the start of October, and the realization just occurred to me this week that not once this summer have I produced a fish report for Mono Lake.
Last Monday, I drove to the lake to do some National Audubon Society-style bird watching, in particular, mountain quail. Didn’t find any in the hills below Convict Lake, so I headed off to the wild western front of Mono Lake. Driving past the lake on U.S. 395 towards Cemetery Road, I eyed a few gulls and ducks on the water, and observed what truly looked like a trout feeding. Something was breaking the surface. I asked three old salty dogs casting lines off the rocks of Navy Beach how they were faring. Turned out they’d been hitting Mono for about 10 days straight and dining on sushi every night, definitely as fresh as a Robbie Roll at Shogun.
The latest at Mono Lake? Bait anglers are getting into schools of bluefin and dorado off the western end of Paoha Island. Running mackerel and sardines through the channels are putting anglers on multiple 30-plus pound tuna in half a morning! Big ol’ Rapala saltwater lures are getting plenty of fish. Go with light blue or dark blue. Get your drag loose on your reel with 20-pound test, in case you get into anything good.
Fly anglers are doing very well off the northern point of Negit Island. Bonito are coming ashore thanks to the one and only Bonito Bunny, size 2. Bluefish are grabbing at both Crease Flies and Enrico’s Ghosts, sizes 2/0 and 3/0, either green or blue. Barracuda are hitting on size 2/0 Nasty Needles in Chartreuse. Make sure your 8-weight reel has about 400 yards of backing. You might get taken on a run. Read the regs for Mono before you go, a couple of anglers were cited by DFG wardens last Wednesday for taking immature barracuda from the waters.
As for other angling in the area, reports from the East Walker are decent. There are plenty of kokanee salmon in Twin Lakes out of Bridgeport between Upper and Lower Twin. You can’t fish them between the lakes, but it’s worth going up there to see the four to five hundred hanging out. Flush colors.
Rush Creek is fishing decent. Lots of wild, beautiful browns below Grant. The fly anglers are getting into more trout in the zero limit section than between the lakes. The wild browns are small, but a lot of fun to catch. Mostly opportunistic feeders, so they’re bound to hit most dries that you toss at them. Pitching Sierra Brite Dots might be as good a start as any.
Some big fish are moving around the lakes in the June Lake Loop. Nightcrawlers and Gulp! will beach any of the Alpers in the lakes throughout the Loop. Thomas Bouyants are good lures to troll with now. Gull is one pretty place with its exploding golden aspen this time of year.
I’m still on my personal pursuit of mountain quail with the dogs, and have been cutting back on the fishing until I limit out some fortunate afternoon. But, I did order the trout at Fireside last night. Two filleted pieces of trout served up with coleslaw and fries. Pretty tasty, actually. And, at least dialing up trout for takeout has got to count for something, doesn’t it?
A more detailed report can be found at http://kittredgesports.com/fishing_report.php. Leonard guides for Kittredge Sports. Call 760.934.7566.