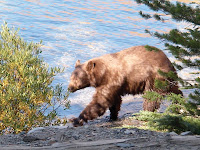 This bear was shot and killed by a San Bernardino man at Lake Mary on Sept. 22. The case has been sent to the Mono County District Attorney’s Office for review. No charges have been filed to date. (Photo courtesy of Bolton.)
Council plays keep-away with public on bear issueMammoth Town Council, by a 3-2 margin, decided not to open up bear subcommittee meetings to the public at its regular meeting Wednesday.
Councilmembers Skip Harvey, Jo Bacon and Wendy Sugimura cited legal concerns in their decision, at least for now, to keep the meetings private.
The initial discussion wasn’t so much about open meetings as opening up the committee.
Councilman John Eastman had suggested that the bear subcommittee add several new members, including a representative from the California Dept. of Fish and Game, a representative from the Inyo National Forest, a representative from local citizens’ group Bear-With-Us.org, as well as Wildlife Specialist Steve Searles.
The subcommittee currently consists of Harvey, Sugimura, Town Manager Rob Clark, Police Chief Randy Schienle, Town Human Resources Manager Michael Grossblatt and citizen Dan Dawson.
Councilmember Jo Bacon said she thinks the current committee is fine the way it is.
Meanwhile, Harvey and Sugimura seemed adamant about keeping local bear group Bear-With-Us.org out of the loop.
“We need people who wish to work with us in good faith and with an open mind,” Harvey said. “If an organization inserts its personality [into the equation] and becomes an obstruction … I have a concern.”
Hmm. What organization could he have been referring to?
Sugimura said she could support Searles, as well as representatives of DFG and the Forest Service, having an advisory role on the committee, but did not support the inclusion of a Bear-With-Us representative. Bear-With-Us, she maintained, has “a different agenda from what we seek as a Town.”
Eastman disagreed. He feels there’s a distrust that’s developed between the Town government and a segment of the community that feels strongly about the bear issue, and that inclusion of a member of Bear-With-Us would serve to make the public feel fully represented.
“If Bear-With-Us is not included, then we need to make the meetings open to the public,” he said.
Shortly thereafter, Lucy Parker threw Council a curveball by asking that the subcommittee also have Native American representation, something that had heretofore never been brought up or even considered. “My people have more familiarity with bears than anyone,” said Parker.
With two constituencies (Bear-With-Us, Native Americans) expressing interest in having a seat on the subcommittee and Eastman thinking a third (Mammoth Mountain Ski Area) should at least be notified/invited to meetings on an ad hoc basis, a desire for broader, more inclusive meetings appeared evident.
For Harvey and Sugimura, however, broader and more inclusive appeared potentially threatening and annoying. “I don’t want these to turn into emotional, stone-throwing meetings,” Harvey stated.
“We need to be able to function effectively,” added Sugimura, implying that potential dissent at meetings would lessen effectiveness.
“Do you think this summer’s results have been successful?” goaded Eastman.
“I think we’re getting off-topic,” replied Sugimura, not wishing to let results get in the way of process (and quick, conflict-free meetings).
“I don’t know if you heard what I said, but there’s a trust issue,” said Connie Lizza Moyer, whose testimony appears in this week’s letters section. “Are you so scared that people are going to come in [to meetings] and disagree with you?”
Harvey said he was concerned about whether or not certain sensitive issues (such as the potential issuance of depredation permits) could be addressed if the meetings were public.
“I’d prefer the meetings be public,” said Bacon, before taking cover behind Harvey’s legalistic stance.
Eastman thought the reasoning ludicrous. A depredation permit is between a homeowner and DFG, he said. “Our wildlife subcommittee has nothing to do with issuing depredation permits.”
“All three of these Councilmembers ran on platforms of openness and transparency,” said Eastman. “I don’t understand this.”

In other Council news, it appears Council has decided to keep the ice rink open for at least one more year, though Tourism and Recreation Commission Chair Bill Sauser said a $200,000 annual subsidy for 5,000 skaters is not sustainable.
Tourism and Recreation Director Danna Stroud said the Town has a $500,000 grant it can use towards putting a roof on the ice rink to make it more of a year-round facility, but that grant expires in 2012. The cost of the roof is $1.2 million, so the Town will have to come up with $700,000.
Seeing Snowcreek developer Chuck Lande in the audience, Mayor McCarroll suggested the rink could be renamed “Landeland.” For a price, of course.
Mammoth Brewing’s Sean Turner was appointed to the Tourism and Recreation Commission by a 3-2 vote. Bacon and Sugimura voted for candidate Mary K. Prentice.