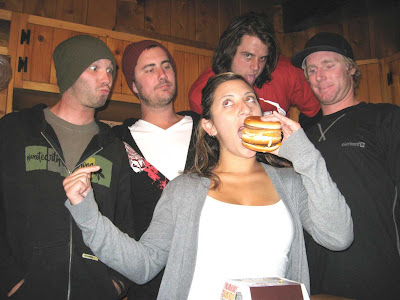 A quest for Mammoth’s secret menus ends in McLust

If you’re like me, you have undoubtedly eaten everywhere and everything in Mammoth. Sure there are plenty of good places to eat, but you’ve been down that road so many times you can’t bear the monotony. Luckily for you, the out-to-eat connoisseur, there exists an untapped option.
This week, The Sheet has decided to expose some of Mammoth’s fabled secret menus. Warning: you won’t find these things on the menu so here’s the dish:
At Pita Pit, Owner Doug Hanna boasts the VIP Club. Legend has it ex-employee Eugene created this Noah’s Ark of a meat-snack on his breaks. If you’re in the mood for chicken, bacon, ham, teriyaki sauce, sautéed vegetables, cheddar and swiss, this pita will certainly slay the hunger dragon.
Down the street at Old New York Deli, employee Matt Abbot spilled the beans about the Chila Quiles. “It’s kind of like breakfast nachos,” claims Abbot. This breakfast pile, consists of fried tortillas, eggs, and tons of south of the border flavor. But if you’re looking for a meatier substitute try the Torta Cubana, which translates into Cuban sandwich. Created by manager Jorge Gonzalez when Old New York Deli first opened, it was designed for a construction worker’s bottomless appetite. Pound for pound it’s a hotdog sandwich with ham, carne asada, mayo, and anything else your battered and neglected heart can handle.
At Shogun Restaurant in the Sierra Center Mall, they offer what might be considered the Rosetta Stone of secret sushi. Owner Robbie Tani, has the ability to create just about anything you can fathom. Some of the secret menu sushi includes rolls like the Kitchen Sink, Rick’s roll, Volcano roll, Starfish roll, and the Julie roll.
At John’s Pizza Works, Bill McDaniel happily handed over his secret locals menu which has a huge variety of burgers, meatball subs, Italian sandwiches, and pizza – all with fries and a beer (or soda) for $6.95. “My favorite is the Italian sub. We’re known for our pizza but people would be surprised to find out we make tons of other great stuff,” claims McDaniel.
Following that same mantra, Subway still offers its coveted pizza from the early 1990’s (by special request). When the chain took a healthy spin with the introduction of sandwich and massive pants model Jared, the pizza was tossed off the menu. If you want to visually see it on a menu, try Canada or Mexico.
If you’re strapped for cash and you really need a cup of coffee, Starbucks in Vons has a miniature cup called the Short. It’s about 10 cents less and they don’t advertise it. The Short size cup is pretty small; it’s like an infant’s first cup of coffee. But it’s cheap and it also gives the illusion that you have really big hands. Double bonus.
But my all-time favorite secret menu item has to be from McDonalds. A reliable source at the University of Florida tipped the Sheet about a legendary sandwich rumored to originate from a Daytona Beach McDonalds. This monstrosity of a sandwich consists solely of select dollar menu items. You start with a McDouble cheeseburger, open it up and jam an entire McChicken sandwich, bun and all, right in the middle. This hybrid monstrosity is appropriately called the McGangbang. Of course, if you substitute a Spicy Chicken sandwich then you’ve created an unprotected McGang-bang.
Dear Diary, Jackpot! As soon as I heard of this fairy-tale of a sandwich I had to have one. When I approached the counter at the McDonalds of Mammoth, I didn’t have the heart to order it by its given name, seeing as I was ordering it from a nice older lady and I didn’t want to receive a McSlap across the face. So I decided to order it by describing its contents.
After carefully explaining the anatomy of the McGangbang, she looked at me weird with a slight grimace and following the old McDonalds slogan, “Have it your way,” she translated the sandwich in Spanish to the cooks in back. I paid my $2.18 and patiently waited for the gluttonous pile of cheese and lust. Moments later, she carried the McGang-bang to the counter. She asked if I would like a knife and fork, seeing as it was so big she had to put it in an Angus Third Pounder box. I told her that it wasn’t necessary because I wanted to eat it the way it was meant to be eaten (with an unhinged jaw).
Oh yeah! At first bite it was delicious. However, halfway through I began to slow down. The abundance of meat and cheese was clogging every available artery. When I thought I would be forced to surrender or pass out in a greasy heap, I noticed the bag it came in said “Take it all in.” So I followed orders, and the best part is I didn’t feel guilty the next morning.