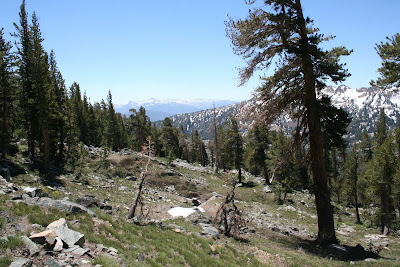 It’s been more than one year since evidence found on a remote forest trail north of Mammoth Lakes led investigators to the crash site of then-missing adventurer Steve Fossett. He took off on Sept. 3, 2007, from a private Nevada airstrip on what was supposed to be a short, Labor Day weekend flight along the rugged Eastern Sierra — his widow, Peggy, called it “a Sunday drive” — from which he never returned. The fate of the millionaire adventurer was a mystery until local hiker Preston Morrow’s discovery of some of Fossett’s belongings, including two identification cards, in October 2008 ultimately led to the charred wreckage of what was his last flight.
Much time has passed, but even with results from forensics and other tests and studies, precious little is really known about why Fossett crashed and what happened to him in his final moments.
One account of special interest is from an unidentified camper, who thinks he saw the plane moments before it slammed into a remote Eastern Sierra mountainside.
According to a final report compiled this past spring by the National Transportation Safety Board, the camper watched the plane struggle at an altitude of about 11,500 feet as strong winds blew out of the southwest. “It looked like it was standing still due to the wind,” said the camper. The report indicates that Fossett likely died “on impact” of “multiple traumatic injuries,” and winds “could have contributed” to the crash. He was ultimately identified by bone fragments, all that remained of him when the the wreck was found a year later.
While the report doesn’t state a formal cause, it does outline numerous facts discovered during the investigation, including reports of strong winds and previous problems with the plane. Bishop-based meteorologist Hal Klieforth, who’s studied the region’s wind and other weather related phenomenon since the early 1950s, told The Sheet one aspect that stuck in his mind were the atmospheric conditions.
“There were significant winds in the Eastern Sierra that day, including some that could produce severe up- and downdrafts,” Klieforth explained. Soon after the NTSB took over the investigation, Klieforth compiled data on the weather over the mountain range along what would have been Fossett’s trajectory on Sept. 3. After the crash site was discovered in 2008, he submitted a letter to NTSB investigators detailing his findings.
In the letter, Klieforth wrote that on Sept. 3 he observed towering cumulus clouds east-northeast of Bishop above the White Mountains. “Most noteworthy is that at all three mountain top weather stations (posted on Slide Mountain, Mount Warren and White Mountain Peak), the maximum wind velocities on Sept. 3, 2007 … varied at speeds between 60 and 70 miles per hour,” Klieforth wrote. “The lenticular clouds observed that day in Bishop are a manifestation of lee waves, which are associated with up- and downdrafts and often with turbulence of varying degrees.”
Radar apparently tracked “a plane” as it flew south along the mountain range at 9:07 a.m. The tracking, however, ends abruptly at 9:27 a.m. near the crash site. Timing of the radar tracking would, given the right flight plan, dovetail with approximately when Fossett would have been in the area. Which would have taken him into the section of canyon where his underpowered engine would have had the hardest time overcoming formidable air currents.
A pilot who flew his passengers over Yosemite National Park around that time said his smooth ride was interrupted by “random rough chop,” which made for “a weird day” in the air, according to the NTSB. “I’ve always thought wind was the culprit,” Klieforth told The Sheet.
Fossett, who made a fortune in the Chicago commodities market, gained worldwide fame as an adventurer, setting records in high-tech balloons, gliders, jets and boats. In 2002, he became the first person to circle the world solo in a balloon. Klieforth opined he found it unusual that someone with Fossett’s level of experience would make simple mistakes, such as not checking the weather in greater detail.
“And he didn’t file a proper flight plan,” Klieforth pointed out, adding that had Fossett not committed that one oversight, it probably would have shaved months off the search time. Instead, immediately after Fossett’s disappearance, the NTSB ended up running down a report from an observer who thought he’d sighted Fossett’s plane over the Nevada desert, an account which turned out to be erroneous.
At the time of his death, Fossett was 63. Wind notwithstanding, it’s possible that another factor could have contributed to the crash, such as a health-related anomaly (heart attack). Far too little of his remains were found to address or advance that theory.

The crash and aftermath

What brought him down is still as much a case of educated “best guesses” as what happened next.
Among the discoveries amid the shattered wreckage was the emergency release handle for the pilot’s door, with the locking pin still in place, the NTSB said.
Fossett left the western Nevada ranch owned by his friend, Barron Hilton, at about 8:30 a.m. in a Bellanca 8KCAB-180, called the “Super Decathalon,” a light aircraft known for its aerobatic agility. He had logged at least 40 hours in the plane, the report said.
Forensics generally supports the eyewitness description of the plane’s final moments. Had it gone in nose first, as was first reported, Fossett likely would not have survived the initial impact. If he managed to get the plane to land more or less flat, that might allow for the possibility that he survived the crash itself.
Once he hit, however, the plane would have almost immediately come apart. The aircraft’s cockpit was essentially a glorified roll cage-type design, not unlike that found in race cars. It’s main purpose, however, was not necessarily protecting the pilot in case of an accident. The chrome molybdenum metallic structure, which was found largely intact, was intended to provide attachment points for the tail, engine mount and struts for the wings. Fossett’s injuries were in all probability sustained due to contact with the cage that wrapped around him inside the aircraft.
Following the path of the items found at the scene — the money, ID cards and sweatshirt — leads one to just about the exact point where the Blackhawk helicopters landed not far from the crash site, a location Fossett himself would have tried to reach instinctively. (Fossett was reputed to be a skilled survivalist, with a great deal of training that he had used to survive numerous other incidents.) The plane and some nearby brush burned, sending a plume of black smoke into the air, and one theory posits that Fossett may have thought someone saw it and used it as a beacon for a rescue effort.
One working theory is that he already knew all too well the extent of his injuries, and that when enough time had passed and no rescuers appeared to be coming, only then did he make an effort to head toward the John Muir Wilderness. What remains were found that identified Fossett’s final location ended up roughly a kilometer from the site. According to Wildlife Management Specialist Steve Searles, previous speculations that Fossett’s body may have been dragged away from the crash just don’t add up.
“I’m pretty sure that didn’t happen,” Searles said “Bears are too lazy to make that kind of effort, and coyotes and mountain lions wouldn’t have to move you. You’re already in the middle of nowhere, right in their backyard.”
What actually happened to Fossett in his final hours will probably never be fully known. Not enough forensic evidence is left to piece together enough to fully illustrate what sort of ordeal he went through before, during and possibly after the crash, if indeed he survived it at all.
No matter what the cause, Klieforth said he hopes Fossett’s tragedy at least leads to greater caution among local and visiting pilots when flying Eastern Sierra skies … skies that, when the weather isn’t so wonderful, can be anything but friendly.