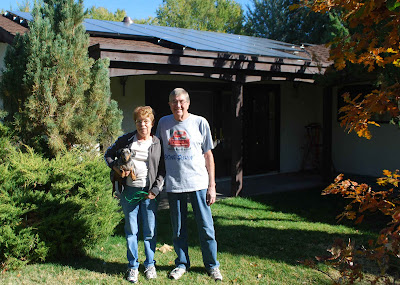 Jean and Roger Fausnaught of Bishop cut their utility bills by almost $400/month when they installed solar panels at their home. (Photo: Fredericksen)

Considering propane prices and high electric bills, “free energy” sounds enticing, but it’s probably too good to be true, right? Correct. However, local solar power contractors are labeling sunshine “free energy” to advertise their businesses to Owens Valley residents. While in theory, owners of solar panels can tap the sun’s rays free of charge, installation costs are often too high to make solar energy seem worth the expense.
That being said, new federal tax credits and rebate offers have made investing in solar power cheaper than ever. Although for some home and business owners, installation costs are still daunting, solar contractors argue the technology will eventually pay for itself.
To generate local interest in solar energy, the Owens Valley Contractors & Vendors Association (OVCVA) partnered with the Eastern California Museum to host a public solar power conference in Bishop Tuesday, Oct. 20. The public turnout was impressive, totaling more than 100 people. The main objective: to connect local contractors to residents interested in solar energy solutions.
Debbie Kruse, vice president of OVCVA, said she hadn’t expected the event to be such a success, and the public interest may be a result of the recession.
“In these economic times, we’re paying attention to where all of our dollars are going,” Kruse said. “I think the economy is just making people more aware. I think money talks. It’s good to ‘go green,’ but it has to make economic sense too.”
Never before has solar panel installation been more affordable. The combination of the California Solar Initiative (CSI) rebate and the 30% Federal Tax Credit on the net cost of a system after rebate may cover about 45% of the average installation fee.
Dr. James M. Stroh, a former professor at the Evergreen State College in Washington State, was among the speakers at the conference. He said the majority of the state of California is a “geographical goldmine” for solar power.
In order to take full advantage of this, however, homeowners should schedule an energy audit on their house to analyze what their energy consumption is, said Scott Smith, consultant for Highpoint Solar. Based on that information, Smith said, owners can determine the best ways to become more energy efficient before installing a solar system.
Insulating and weatherizing houses before installation will save both energy and money, said Ron Saenz, co-consultant for Solar Energy Designers in Bishop. It makes more sense to install solar panels in an energy-efficient house. Otherwise, solar energy is just wasted energy, Saenz said. Home improvements like insulating walls, caulking window and door frames, and replacing single-pane with double pane windows, will inevitably lower energy bills.
Paying for home improvements is worth the expense. “You want to buy the smallest sized system possible, because solar is expensive,” Smith said.
After revamping a house, the owner may then schedule a consultation with a solar contractor. These consultations are usually free, and the contractor will do a site survey, check the roof pitch and shaded areas, and give estimates on how much the installation will cost, before and after rebates and tax incentives.
Roger Fausnaught, a homeowner in Bishop, said during the summer last year he was paying $400-500 per month in utility bills. But after installing solar, his utility bills averaged about $60-70 per month. He said Sierra Solar installed his system quickly and efficiently, and he’s pleased that the only maintenance work he has to do is hosing dirt off the panels every so often.
Currently, surplus solar energy is pumped back into the utility grid. But after Governor Schwarzenegger signed the bill AB 920, utility companies will soon start paying their home and business owners for excess generated solar energy. AB 920 will require utility companies to compensate customers annually when their solar systems produce more energy than they use in a given year.
Investing in solar will also increase a home’s resale value. National solar expert and economist Andy Black estimates that for every thousand dollars per year of utility bill that you eliminate with renewable energy, you add $20,000 dollars of value to your home.
“If you’re living in a sunny area like this, there are very few reasons why you shouldn’t invest,” Fausnaught said.
Smith said that there is no better time to invest in solar energy. If a person is considering solar for his/her home it’s best not to wait. With the current California tiered rebate system, purchasing a solar system sooner will guarantee a higher rebate.

If small improvements to household energy-efficiency are made, owners can save on energy bills.
Replace appliances with ENERGY STAR qualified models
Invest in high performance windows to increase comfort and save energy
Install R-13 or higher thermal resistance insulation in walls and R-30 or higher insulation in ceilings.
To reduce use of air conditioning, consider installing an evaporative cooler
Install compact or linear fluorescent lighting fixtures to replace incandescent lighting fixtures
Replace torchiere lighting fixtures containing halogen lamps with more efficient fluorescent torchieres
Caulk around doors and windows to reduce leaks
Invest in a pool or spa cover to minimize heat loss from evaporation
Install an energy-efficient pool pump motor