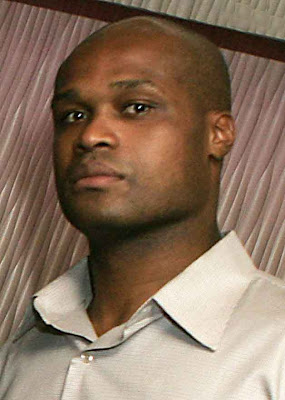 He played for the Boston Celtics and the Miami Heat … 12 years, $110 million … and now Antoine Walker is reportedly broke … no, scratch that … in DEBT. How does that happen? Hartley doesn’t even want to hear excuses. “Dumbass,” is all the Sheet sports columnist had to say on the matter. (Photo: Wikipedia/Commons)

Ravens 23 Broncos 13. The mile high horses come back to earth. Denver QB Kyle Orton remembers he is Kyle Orton.
Texans 16 Bills 20. The Texans are a perennial 8-8 team and new Bill QB Ryan Fitzpatrick will surprise them, himself, his team and the entire city of Buffalo by not sucking too much.
Bears 12 Browns 7. The Browns need to take a break from football for a while. Don’t practice for a few weeks. Be like those bad little league teams that just show up for the games and that is it. Don’t wash the uniforms. Get some attitude or something. Good thing the coach (Eric Mangini) is a genius.
Cowboys 23 Seahawks 16. The Seahawks will undoubtedly blame the officials or injuries for another loss, never admitting to themselves they’ve hired a coach (Jim Mora Jr.) hailed to be their savior who hasn’t proven a thing in the NFL.
THE EX-LAX Special of the Week: Lions vs. Rams. How ‘bout this? If you watch this, call me or email me. Give me your address and phone number. I will fly to your house and beat you like I own you.
Colts 23 Niners 12. The Niners started off so strong and now they have former #1 pick in the draft Alex Smith starting at QB. And everyone is all jacked up about his last game. Amazing what you can do when you come off the bench with no pressure and no expectations. Now he is the starter … and we have seen this before.
Dolphins 24 Jets 17. Wildcat. Blah Blah Blah.
Eagles 23 Giants 19. My how the mighty Giants have fallen. D-FENCE or D-PENDS?
Chargers 13, Raiders 3. Raider QB JaMarcus Russell completes 0 passes. Why? ‘Cause he ain’t playing. But even if he was playing, I’d still stick with a goose egg. Yes, Russell got benched last week. They should have tied him to the bench and gave his fat-ass some Hydroxycut to shave some weight off of him. Then they should tie him up and pin his eyes open and make him watch game film – preferably of some other QB actually qualified to play QB.
Jacksonville 24 Titans 17. Titan QB Vince Young may play this week. Could be a spark. But the way they are playing they don’t need a spark – they need a bomb up their $#@%^@!
Packers 31 Vikings 17. By the 3rd quarter, Viking QB Brett Favre is already composing the postgame press conference in his head trying to figure out who’s to blame.
Cardinals 24 Panthers 13. The Panthers are still playing QB Jake Delhomme ‘cause “they still have a chance to be in the playoffs.” That is great, ‘cause then Delhomme could get a chance to throw 8 interceptions in a playoff game. More on this later.
Saints 31 Falcons 17. The Saints are playing ball. Offense and defense. The Falcons are overrated.

Okay, my weekly Favre rant. The things I see that none of the experts (Favre worshippers) wish to touch.
1. He’s making a living off throwing 3-yard passes. That won’t last forever.
2. When he throws long, everyone keeps talking about the great catches his receivers are making. Huh. Must mean he is off the mark. He is throwing off balance and throwing passes up for grabs. Ultimately, the odds catch up with you and great catches become great interceptions.
3. He is a bitch. In the preseason, he threw a chop block on someone that could have caused serious injury. He did it again last week. Against the Steelers, after throwing an interception, he appeared like he was following the play and wanted to make amends and make a tackle, but as soon as he saw there was a chance of contact, he took a dive. Repeated this after another pick at the end of the game. A bitch.
The experts say the Cowboys are GREAT again after beating the Falcons following a bye week. This is just two weeks after they were miserable for needing overtime to beat the lowly Chiefs. WR Miles Austin is not Michael Irvin.
The experts say Tampa has problems. No s%$#. The Bucs had no great delusions about being good this year. They blew the team up … got rid of the cornerstones of the team and started over. They needed to do that. They are supposed to suck. So shut up and move on. At least the Bucs aren’t trying to fool anyone like the Lions, Rams and Seahawks.
The experts say “Jake Delhomme should still be the Panther QB. He gives them the best chance to win.” Delhomme only gives you the best chance to win if you shoot the rest of the QBs on the team.
Prior to week one, the experts said: “Michael Vick is a great pickup. They are getting him for a bargain price. He will make the team more explosive and be amazing in the wildcat offense.” SHUT UP. I told you he was out of shape, slow and sucking up any money he could get. He no longer has the quickness or elusiveness to keep his ass from getting tapped like a keg of Bud Light.
The experts said prior to week one that if you draft Bengal RB Cedric Benson for your fantasy team, you may as well donate your $100 entry fee. Oh, that was me. Okay, Harold, shut up.

Where the hell is T.O.? Stuck in a cold wasteland of football anonymity where he should be. Even he knows he can’t get press up there. He better lobby the team to run the wildcat and snap the ball directly to him. This is the most I have liked T.O. since he has been in the league. Why? See no evil, hear no evil.
Seahawk RB Julius Jones missed a practice for personal reasons this week. I know what that means, he personally couldn’t see playing for the sorry ass Seahawks again this week.
Is anyone more overhyped than Saint TE Jeremy Shockey? He’s just a big-mouthed, overrated malcontent. Riddle me this Batman. How many seasons has Shockey had more than 7 TD receptions: 0. He has 30 total in 7-plus seasons. Not exactly lighting the world on fire. How many 1,000 yard seasons: 0. He’s caught more than 70 passes in a season once, 7 years ago. He is more mouth than hands. He catches 0 passes for 3 games, then catches one pass, runs over a 175 pound defensive back and talks s$%# and pumps his chest and throws the ball, then runs off the field with an injury (he hasn’t played all 16 regular season games once in his career). The fantasy experts list him as someone to play this week. Right.
Chief RB Larry Johnson has been suspended. About time. He can’t stay in check. He dogged his coach on Twitter, then dropped all kinds of homophobic slurs. Suspend him? Why not release him? Cut out the cancer.
The NBA is back. Who cares? Oh wait. Story out that Antoine Walker made $110 million during his 12-year career. Now he is broke. Not even. He’s in DEBT. No explanations needed or warranted. I don’t care who he hung out with or who he was supporting, he has nothing left. DUMBASS.