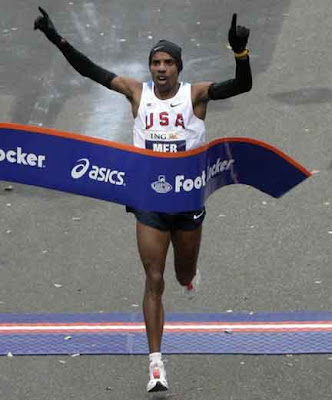 Meb Keflezighi is a man on fire long after he’d been written off as embers for not making the 2008 Olympic team.
What a difference a year makes.
Last Sunday, Keflezighi became the first American since Alberto Salazar in 1982 to win the New York City Marathon. It was also an historic moment for Team USA, with six runners in the top 10, including fellow Olympian and Mammoth resident Ryan Hall, who finished fourth.
The last time 6 U.S. runners finished in the top 10 here was back in 1979.
The win was doubly sweet for Keflizghi, the first marathon victory ever in which he also set a personal best. He recently also posted another personal best and scored a record-setting first place finish in the Oct. 3 running of the Fourth Annual San Jose Rock ‘n’ Roll 1/2 Marathon, where he set a new U.S. 20K record and bettered his previous best time by 25 seconds.
At the start of the race, a large lead group of about 13 did most of the running at the head of the field. By around mile 20, the higher tempo left the lead pack with only 5 runners, but with only 2 miles to go, Keflezighi overwhelmed the field with his relentless pace.
Sportswriters who had previously dismissed Meb due to age and injuries are reconsidering their opinions
Keflezighi spent 1.5 years in rebuild-mode after one terrible November day two years ago, when his body started to fall apart. Already sick just days before the 2007 U.S. Olympic Marathon trials in New York, he cramped up because of dehydration during the race and ended up crawling around a hotel room on all fours because of the pain in his legs. “[He] practically couldn’t get up and walk to the bathroom,” according to his wife, Yordanos. That same day, his friend and training partner, Ryan Shay, collapsed and died during the race.
Months later, a stress fracture was found in his hip. All in all, Keflezighi could have been forgiven for hanging up his racing shoes for good right then and there. He didn’t.
Today, the words “age,” “injuries” and especially “retiring” aren’t in his vocabulary. He worked way too hard to get healthy and back to the starting line in New York and defy the expectations of many of the race’s two million spectators lining the course, who thought they’d see an athlete running for Ethiopia, Kenya, Brazil or Morocco cross the finish line first.
And he’s got a history of foiling the naysayers, taking the silver medal in the 2004 Athens Olympic marathon, the first medal for a U.S. man since Frank Shorter took silver in 1976. Americans could run with the Kenyans and Ethiopians, and Keflezighi was one of those who were resolved never to let there be another time like 2000, when the U.S. qualified only one runner for the Olympic marathon.
Some of the motivation for Keflezighi’s win could have come in the form of a tribute to Shay. (During a pre-race news conference, Keflezighi asked for a moment of silence in his memory.) Shay reportedly took great offense when some insinuated that Keflezighi wasn’t a “real American” even though he’d been living here since he was 12, and a citizen since 1998. He can recite the exact day he came to America from Italy — October 21, 1987 — after his family left Eritrea as refugees. He was thrilled to attend UCLA, and as a Mammoth resident, its not unusual to see him running up and down local roads, or out and about with his wife and family during town events.
During the race, Keflezighi acknowledged his friendship with Shay, pointing to the USA letters on his jersey a couple of times and making the sign of the cross as he ran past the spot near the bottom of Cat Hill where Ryan Shay fell. After the race, Shay’s father, Joe, reportedly called Meb “one of the class acts in all of sports.”