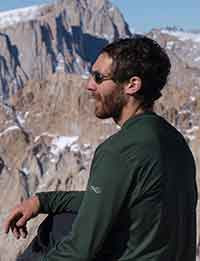 Early Days in the Range of Light

When John Muir ascended Mount Ritter, his apprehension about the last leg of his journey was not enough to persuade him to turn back. Even when the cliffs near the summit looked most foreboding, it was as if the mountain was coaxing him on.
“We little know,” Muir wrote, “until tried how much of the uncontrollable there is in us.”
Muir reached the summit of Mount Ritter after a three-day long journey carrying a light jacket, a tin cup, a notebook, and a bundle of bread. He slept on the ground at night without a blanket in the middle of October, climbed up cliffs without a rope or harness, and lived to tell the tale.
That was 1872. These days, high-tech gear is seen as essential to a trip, and the people who don’t carry it are viewed as ill-equipped for the unpredictable forces of nature. However, modern outdoor equipment can easily make a mountaineer’s backpack weigh over forty pounds—what Muir would probably call an unnecessary burden for an adventure into the wild.
“Risk opens the door, focuses the mind, begets a healthy distrust for the padded walls of prudence,” Muir wrote.
Learning the stories of climbing pioneers such as John Muir, William Brewer, and Norman Clyde, makes modern outdoor adventure seem like a walk in the park. However, author Daniel Arnold wanted to do more than just learn their stories. He wanted to retrace their footsteps.
Arnold spent four years researching and writing what became “Early Days in the Range of Light: Encounters with Legendary Mountaineers.” During the cold months, his research included reading biographies and historical accounts of first ascents. In the summers, Arnold would, as accurately as he could, recreate the climbs of legendary mountaineers. He used only the equipment that would have been available to him between the years 1864-1931, but also mirrored the personal choices of his role models as best he could.
Arnold writes: “When the footsteps I followed were lightest, as with Muir, I left my sleeping bag and backpack behind, too, and spent days living out of a small canvas sack slung over my shoulder.”
The book spans the Sierra Nevada from north to south, covering 15 mountains, following the footsteps of the men who first reached their summits. Not only does the book contain interesting history and biography, but Arnold also exhibits his talent for nature and adventure writing. His prose is thoughtfully pieced together into a compelling and beautiful narrative that reminds us why we live in such a breathtaking place.
“The mountains have not changed nearly as much as we have,” Arnold writes. “Flashing digits may hurry us along, but the rocks and high meadows remain apart above the bustle. The asphalt noose around the mountains has tightened, the surrounding valleys have been mined, graded, and drained, but across the pavement threshold lies a country that is quiet and still.”
Daniel Arnold was raised in Portland, Ore., and developed a love for climbing at Broughton Bluff and Smith Rock. When he moved to California, however, and saw the Sierra mountain range for the first time, he was hooked. He has climbed nearly 100 Sierra Nevada peaks since graduating from Stanford with a philosophy degree.
Arnold will be at book signings at three Eastern Sierra locations this weekend: Friday, Nov. 13, at 6:30 p.m. in Bishop at the Inyo Council for the Arts (includes slide show); Saturday, Nov. 14, at 4 p.m., in Mammoth Lakes at the Booky Joint; and Sunday, Nov. 15, at 1 p.m., in Lone Pine at the ESIA Visitor’s Center (includes a discussion).