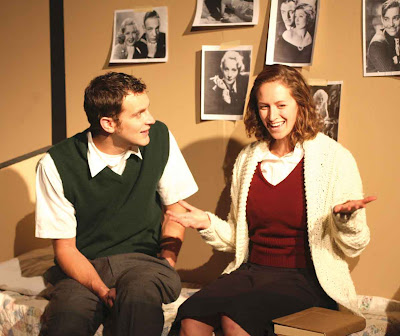 Ask director Shira Dubrovner why she chose “The Diary of Anne Frank” as the first play for the new Mammoth Lakes Repertory Theater’s in the Luxury Outlet Mall and she’ll simply say it was the one that came up next on her to-do list. She just keeps moving forward, staging interesting plays that also show off the depth of Mammoth’s thespian talent pool.
In short, she’s done it again.
The play is based on the real life Anne Frank, who began the first of her three-volume diary on her 13th birthday, June 12, 1942, three weeks prior to going into hiding from the Nazis in the sealed-off upper rooms of the annex of her father’s office building in Amsterdam. Also sharing the small space were her mother, Edith, father Otto, sister Margot and (as dramatized in the play) the Van Daan family and later on a dentist, Mr. Dussel.
With the assistance of a group of Otto Frank’s trusted colleagues, Miep Gies and Mr. Kraler, they remained hidden for more than two years.

Veteran actor and director Bob Struckman’s rendering of the cranky Mr. Dussel could hardly be better. As the Franks, Dee Di Gioia (“Cat On A Hot Tin Roof”) and Greg Young (“As You Like It”) are endearing as Anne’s parents, dealing with not only physical but also emotional confinement, and trying to raise their family with some semblance of normalcy.
Rick Phelps, last seen as Big Daddy in “Cat,” shows considerable range as Mr. Van Daan, delivering many of the plays light moments, yet he’s also up to some key emotional exchanges with Alice Suszynski, who’s perfect as the complicated and difficult (selfish?) Mrs. Van Daan. And Natalie Wolf brings off the Frank’s oldest daughter, Margot, with a steady hand, her weaker constitution a counterpoint to Anne’s exuberance.
Cameron Ramey, who’s recently played a fly-eating Renfield, a bombastic Bo and a man-eating Audrey II, delivers a wonderfully shy and timid Peter Van Daan, who as happenstance would have it explores the uncharted territory of young love with Anne. Sabrina Nioche, primarily known for dance, turns in a great acting debut as Miep, who bravely and selflessly tries to help the refugees, unaware of the mental anguish in the annex that sets in between her visits.
Stage and screen vet Dennis Kostecki is terrific alongside Nioche as Mr. Kraler, sympathetic to the Frank’s situation, particularly Otto, with whom he has business ties. (Local favorite Chuck Scatolini will play Mr. Kraler during some performances.)
David Kubicka and Spencer Myers as the Dutch Collaborators, and Marcus Nobreus as a Nazi solider are all equally menacing.
The centerpiece of the play, however, is Jessica Blum’s portrayal of Anne. Blum hasn’t been on stage since she was a kid, and apparently was destined for the part, taking over for the another actor who had to bow out during rehearsals.
Besides bearing a startling resemblance, she effectively conveys Anne’s youthful, coming-of-age intricacies, while skillfully managing to offset those with a startling wise-beyond-her years presence of mind. Her readings of Anne’s words are particularly moving.
The rest of the play’s strength is in the script, a 1995 revision that restores some of Anne’s musings about her budding sexuality left out of previous versions. (Her father apparently edited out many entries he thought would be of “little interest to the general reader” prior to the diary’s first publication.)
Even Anne is affected by the stifling close quarters they are forced to share, struggling to remain optimistic while going through many physiological changes taking her from a girl to a woman, changes she would sadly never live to complete.
Technically, the production is excellent. Snippets of period radio broadcasts accent the setting. Period costumes, and the set’s prison-esque look and feel (by Tim Casey), are completely appropriate. Even the hairstyles work perfectly.
During one of her readings, Anne (Blum) says she wants to be remembered after her death. She is, via the impact of the diaries left behind, and by extension this play, an important, affecting mix of theater and literature that reminds us in the most poignant way why we should “never forget.”
Note: High school students will be admitted free to any performance, as Rick Phelps, Jim Demetriades of Sierra Nevada Lodge, Eric Wasserman of Edward Jones Investments and The Sheet have offered to buy their tickets. For show info/reservations, call the box office at 760.709.1981.