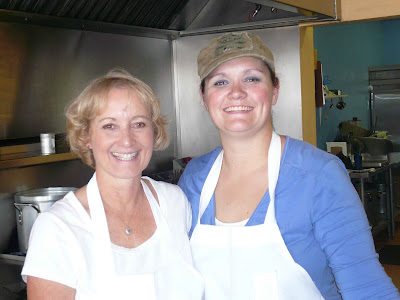 Carlene (left) and daughter Sabrina in the kitchen … seems the rumors of Salsa’s demise are greatly exaggerated. (Photo: Geisel)

Salsa’s not closed, but a recent news story almost shut them down

Salsa’s owners Alex and Carlene Millan may have the business up for sale, but for some reason, the perception on the street is that it’s closed. That could be the result of a recent Mammoth Times story (Sept. 25) on the taqueria, which, while not actually saying it was shut down, may have cast a darker cloud over the popular Old Mammoth Road eatery than the Millans’ would have liked.
And they’re a bit caliente about it. “It’s never been this slow,” Alex said. “Lots of people think we’re closed,” Alex said.
“I’d be at Vons and people would come up to me and say, ‘I’m so sorry you’re closed,’” Carlene added. “ She said the Times article was originally intended as a human interest story, but something apparently happened between when it was written and when it was published.
“It was changed,” Carlene said, upon hearing the original draft read to her by the writer, who also was perplexed as to how the final version appeared in print. In fairness, the Times did publish something of a correction, but Alex and Carlene were disappointed that it only appeared in a rather obscure location. “I don’t think it was in placed where it could do much to correct how the story may have been perceived by readers,” Alex said.
The Millans’ don’t dispute the article’s accuracy per se, but take issue with the tone. “It’s for sale,” Alex said. “We just curbed our hours to stay alive.” Carlene indicated that the story’s headline (“Salsa’s originator gives up … “) even made her think they’d closed their own business.
The main point in any case Alex wants to make is that they’re NOT closing. “We hope the new owners are successful with it and don’t change too much, but until it’s sold, we’ll still be up and running, serving the same food our locals and visitors have enjoyed for the past three years,” he said. By Thanksgiving, the store plans to expand its hours, then pull back for a while and be back up to “full speed” by the time the town is packed for Christmas and beyond.
Of course, these days a certain amount of any decline in business can no doubt be attributed to the effects of the current economic downturn. Still, no news would have been better news.
“It was a huge setback,” she stated. “What I said was that after 3.5 years in business, it was taking all of my time.” Talk to any restaurant owner and they’ll tell you that and operating one is a time-consuming venture, and Carlene said that, coupled with the demands of twop medical careers, forced them to make a choice.
Alex, who also works in the Operating Room at Mammoth Hospital, said he wants to focus more on his medical career, as does Carlene, who also works as an Emergency Medical Technician at the hospital.
Salsa’s went up for sale in September. Buyers are interested and the Millans hope to have it sold by January, but said they plan to keep it open, even it takes a year to close a deal.
Until then, however, look for Carlene and daughter Sabrina behind the counter and manning the kitchen. Salsa’s is open … still.