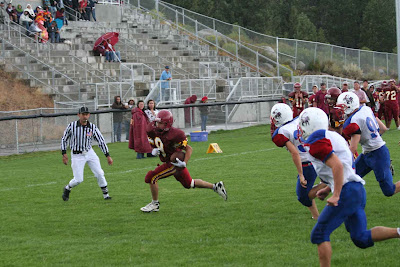 The Friday Night Lights were mostly dark on Mammoth’s football season this year, due largely to the sudden, rather shocking announcement in early September that there would be no varsity team fielded.
High School Athletic Director Scott Luke and Coach James Gray briefed the Board on the chain of events leading to the varsity program being nixed, and talked about their plan to field an 11-man team next season.
Here’s the play-by-play …
April: With the retirement of Coach Tom Gault, a panel of “major stakeholders” meets to find a new coach. “We knew it would be tough to replace Coach Gault,” Luke recalled. The group gives the ball to Coach Gray.
May/June: According to Luke, things were headed the right way through spring practice, but then came a major flag on the play. Practice session attendance began dropping off dramatically.
August: By the first practice of the month, 18 players were not present, leaving just 13 to scrimmage. Timeout.
Ultimately 14 players were deemed academically ineligible. That loss, coupled with some preseason injuries and other students simply electing not to play, left the Varsity with just 13 players, where Gray said he thinks 22 is the minimum needed for optimum effectiveness during practices.
“We talked with the High School staff and Principal Agnitch, but ultimately staff decided not to change the ‘F’ rule, and CIF requires a 2.0,” Luke informed the Board.
September: By this late in the game, summer school wasn’t an option any more, and Gray made the hard choice to bench the varsity season. Two 8-man games were played in September, both versus Immanuel Christian, but a third Halloween game against Lancaster Baptist was cancelled.
There was a hope that a game against Big Pine could be staged during the first week of November as a possible varsity homecoming event. Hopes for that matchup were dashed due to a scheduling conflict. Lee Vining was offered the slot, but declined, saying it preferred to save the team for an upcoming playoff game.
The only games on the Huskies schedule were those played by the school’s JV squad, which closed out its season with a 42-13 Homecoming win against Boron on Nov. 13.
High School Principal Mike Agnitch said he was frustrated that not enough importance was placed on summer school this past year, but added that this year will be different. “There’s plenty of tutoring available,” Agnitch said, “and Coach Gray and I plan to pursue tutoring for any student needing it.” Luke and Agnitch told the Board that in terms of academics, Mammoth’s standards are arguably “higher than those of many other CIF schools.”
Parents speaking checked any anger they may have had at the door, preferring to approach the issue with ideas and constructive critiques. “Lots of effort went into preventing [scrapping the season] from happening,” Liz DeSalvo said, “but it was a kind of a day late and a dollar short.” She pointed out that eligibility isn’t only confined to football — volleyball, for instance, has had similar experiences — and firmly opined that “not getting a 2.0 needs to be worked on.”
“What’s missing in all this are other reasons, besides academics, as to why students are not participating,” commented Nancy Mahannah, who also indicated one of those reasons could be a difference in coaching styles, and that kids may have reacted badly to what they heard during some of Coach Gray’s first team meetings.
Other parents talked about ideas such as moving more required classes earlier in the day, which would allow students more time to finish lab work without having to overlap with practice time. Catcing kids with grade issues earlier in the season was pitched to Agnitch, who vowed to put a better filter system in place. And locking players into team commitments to prevent overlaps with AYSO soccer and other sports was another issue that Luke said he would address.
“It’s not really a lack of numbers so much as a lack of desire,” Gray stated. “Modern technology [Wii Sports, etc.] makes kids feel like heroes just by pushing a button.” Gray also suggested that some of the problem can be attributed to more students in the summer workforce, which he said wasn’t necessarily a bad thing. “They’re learning more lessons in the real world than just football.” Gray also pointed to a reduced number of boys available in this year’s senior class, but added his thought that the upcoming “changing of the guard” could mean football will “become more attractive” next year.
JV Coach and Varsity Assistant Coach Ross McLaughlin echoed Gray’s point somewhat, saying he thought it was about commitment, both on the part of the players and to some extent the parents as well. “I played three sports in high school, and I don’t remember ever missing a practice. It just wasn’t done.”
Gray said he already has 6 freshmen and at least a dozen 8th grade players in the junior league interested in trying out. He added that during a recent meeting of CIF schools, Lucerne and Mojave both acknowledged they may have to resort to 8-man teams in 2 years, but for now the league in general is committed to trying for a full 11-man schedule next season.

In other sports news, Mammoth High School Tennis coach Karen Philbrook announced Monday night she’s stepping down after 3 years as the force behind the girls team’s racquets.
Philbrook said she’s coached many players she’s known since they were kids. “Now, almost all of them are graduating or have graduated, including my daughter Whitney, who graduates this year,” Philbrook said.
She leaves the post on a very high note. This year marks the first time the Huskies team made it to the 2nd round of CIF tournment play. The Huskies finally fell in the Div. 5 playoffs against Granite Hills 15-3. The doubles team of Kendall Dawson and Rebecca Cage, however, won all 3 of their matches, 2 other matches went to tiebreakers, and three singles players advanced to the next round this weekend.
Philbrook thanked Assistant Coach Kathy Higerd and sponsor Tom Cage for their help with the program. Roxanne Tani will replace her as coach next season.