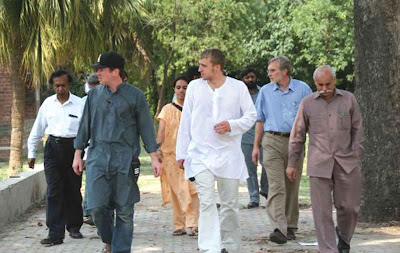 Producers Sean Fahey (in gray) and Jeremiah Hammerling (in white) in Lahore, Pakistan. Fahey’s documentary Message From the East” will screen during the Mammoth Film Festival. (Photo courtesy Endless Eye)

After spending a month in Pakistan filming his new biographical-historical documentary, “Message from the East,” producer Sean Fahey returns to the third annual Mammoth Film Festival starting Dec. 9-13.
At last year’s MFF event, Fahey was a favorite with his short film, “Nancy Picks and Chooses,” in a nutshell a film about a chick that dates grandpas. Though the film didn’t win anything then, Fahey’s film did earn a write up in The Sheet.
A year later, Fahey is heading back to Mammoth Lakes, but not just for snowboarding, press and parties.
“This film has changed everything,” says Fahey, “from how we film and tell stories to even how we travel.”
“Message from the East,” directed by Jeremiah Hammerling, was a work of apparent backbreaking dedication for Fahey’s production company, Endless Eye.
Financed largely by donations, and his credit cards, Fahey and Endless Eye travelled to Germany, Dubai, Pakistan, Spain, Turkey and parts of The United States, all the while immersing themselves in the Pakistani culture to follow the teachings of Pakistan’s national poet and philosopher, Muhammad Iqbal.
Centering on the teachings of Iqbal during the time of colonial occupation by Southern India, his poems were written in the form of “shikfla,” which translates to: “arguments with God.” Though controversial at the time, his teachings of balance and the nature of contradiction were “instrumental in the partition of India and the creation of what is now the modern state of Pakistan.”
Though a century old, Iqbal’s message is one that still resonates today. “Message” observes the roots of today’s struggles in Pakistan and Afghanistan, and the rising paranoia of extremism; tracing these issues back to a decisive point of history and those who were concerned with the same issues 100 years ago.
The film offers a nice balance to an ever present media onslaught of negative images of Muslims. “Message “attempts to answer the fundamental question: “Where are the moderate Muslims?”
This is a question that Fahey hopes to clarify with help from history and the simple act of pointing his camera in the right direction.
Considering the turbulent situation in Pakistan, I asked Fahey if they were ever concerned for their well-being while over seas and he responded, “Yeah, we were pretty scared. My mom would call me all the time crying. A few times we were approached by men on horse back with guns. But looking back its funny because we actually had contingency plans incase we were kidnapped.”
Fortunately they were not kidnapped and when Fahey and crew arrived in Lahore, Pakistan they were surprised at what they found. “I felt like there was this wool that was pulled over our eyes and when we got to Pakistan we were shocked because we discovered humanity; everything we thought we knew about the East was false.”
The film features an even-handed mix of commentary, “We travelled everywhere. We met politicians, professors and even slum lords. But everywhere we went people were so appreciative of what we were doing that they accepted us and opened their doors to us.”
Fahey is finishing up work for IMAN (Inner-City Muslim Action Network), a Chicago-based south-side community center, for which he’s filming a documentary about the rehabilitation of ex-cons.
You can follow Sean Fahey’s work at www.endlesseye.org and watch the trailer for “A Message from the East” at www.messagefromtheeast.com.
MMF films, dates and times are at www.mammothfilmfestival.com.