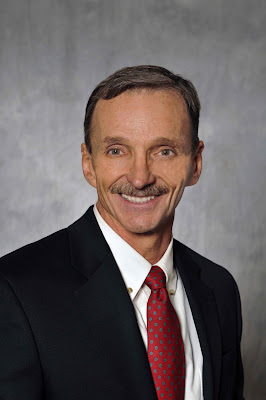 If you’re a kid in Mammoth, you’ve probably been in Larry Johnston’s garage at Halloween. For nearly 20 years, he has built an elaborate haunted house that has become the stuff of legend. Remember “Jurassic Park?” A committed little league coach and avid cyclist, he’s also an impressive float designer, having entered a number of memorable floats in the Fourth of July parade.
Hobbies aside, Johnston has also exhibited a keen interest in local politics, and decided to put his experience and creative vision toward a bid for District 1 Supervisor for Mono County during next year’s elections.
No stranger to county politics, Johnston currently serves as Assistant Director of Mono County’s Community Development Department, where he has facilitated community-based planning efforts and lobbied to streamline government operations. Prior to his tenure as a public servant with Mono County, he led an independent planning consulting firm located in Mammoth Lakes.
With experience both in the private and public sector, Johnston thinks he has the skills to bring a positive change in county government. “I’m not a status quo thinker,” he said. “With proper leadership, the County can facilitate sustainable job creation, streamline permitting, help stabilize the tourism base, invest in recreation and alternative transportation, and fairly proportion County funds to better serve District 1 taxpayers and residents.”
Supervisor Tom Farnetti, who currently holds the District 1 seat, told The Sheet on Thursday he made the decision about two weeks ago not to run for re-election. Farnetti, a member of the Board for the past 16 years, said he thinks the Board and County staff have both done great work, and will leave the Board while things are stable and in pretty good shape. “I want to enjoy some time with my family,” Farnetti said. “Besides, new blood is good. It brings new ideas and I think with the people that either are running or have expressed interest, the district will have some good candidates to look at by election time.”
“If I were to be elected I would resign my current position,” Johnston told The Sheet. Johnston is prohibited from holding both positions by law. “I’m not certain if would actually retire or not,” he added.
If no clear winner is apparent in the June 2010 primary election, who wins the seat will be determined by a runoff race during the November 2010 general election.