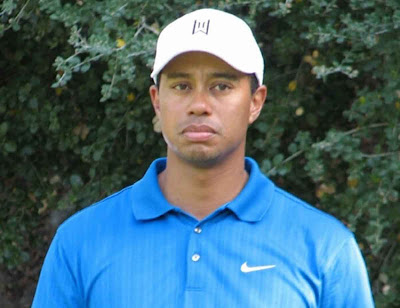 No golf, no girls, no Gatorade … sucks for Tiger. (Photo courtesy Flacklife.com)

The Pittsburgh Steelers may be down, dumb, poorly coached and unmotivated … but I am a fan, so I refuse to believe they are out.
This week’s picks:
Colts 24 Jags 16. The Jags can’t play defense and can’t score. That is a dangerous combination of ineptitude.
Saints 39 Cowboys 20. The Cowboys are a soap opera. Bad TV that just sucks people in. WR Roy Williams said this week that Dallas can beat the Saints. What he said wasn’t that groundbreaking, but why is Roy Williams saying anything, period? He hasn’t contributed anymore to the Cowboys than I have this year. Except after every 1-yard reception he makes, he dances and points the ball down the field and signals first down. Idiot.
Bears 22 Ravens 13. Conventional wisdom says the Ravens ‘D’ should confuse Bear QB Jay Cutler to the point where he wets himself 3 times and throws 4 picks, but the Ravens defense is not good and Cutler is just arrogant enough to throw the ball at will and burn that overrated secondary. Raven LB Ray Lewis busts his girdle chasing Bear WR Johnny Knox.
Pats 23 Buffalo Wings 19. The Pats are falling apart, but the Steelers are falling apart faster, so no one’s noticed.
Cards 30 Lions 26. The Cards are Jekyll and Hyde. Awesome one week and a mess the next. Did the same thing last year and went to the Super Bowl. Just gotta be hot at the right time.
Texans 23 Rams 3. THIS IS THE “YOU SHOULD LOSE YOUR MANCARD FOR WATCHING GAME.” I would love to pick the Rams to beat the Texans, but I can’t think of one scenario where they do. They lack talent everywhere.
Titans 24 Dolphins 16. I am tired of hearing how Coach Tony Sparano and Bill “Mrs. Doubtfire” Parcells have made the Dolphins a great team. They have minimal talent and play an ugly brand of football.
Chiefs 20 Browns 9. THE WE BEAT THE DEFENDING SUPER BOWL CHAMPIONS MATCHUP OF THE WEEK. Try to name 3 Browns players. And I will spot you RB Josh Cribbs and QB Brady Quinn.
Falcons 20 Jets 14.
Eagles 27 Niners 16. The Niners are … see my description of the Cards. Good last week, so will lose this week.
Broncos 20 Raiders 10. The Raiders are starting QB Charlie Frye this week, as they are so irritated with former top pick in the draft JaMarcus Russell. It is clear Russell doesn’t have the mental capacity for the job. Did the Raiders not do their homework on this guy?
Chargers 30 Bengals 13. The Bengals are playing defense now, but can’t score a lick.
Steelers 23 Packers 16. The Steelers win the first of 7 in a row on their way to the Super Bowl.
Seahawks 20 Bucs 13. The Hawks are lousy, and the head coach they hired as their savior is as incompetent as he was IN HIS LAST JOB. But they will defeat a bad team this week and the fans will see it as a sign of things turning around. And Tiger Woods will still be married to his wife next year too …
If the weather is miserable, Panthers 20 Vikings 13. Otherwise, Vikes 23 Panthers 15. One thing about this game, there could be a record set for QB interceptions thrown.
‘Skins 23 Giants 16. Watch Golden Girls. This is ugly football.

Randy Moss. What did everyone say … Randy Moss will be kept in check in New England. Belichick won’t put up with his sh$#. Ha! He’s fine when they’re winning, and when the road gets a little tougher … hello rainbow! True colors coming out. Now he is being dogged for dogging it. And I am loving it.
The NFL All Decade Team was named recently and I have to laugh. Mike Vrabel made it as a LB. Mike Vrabel? Seriously. Is this because he was used as an eligible receiver on offense for some goal line plays and caught some TD passes? Did he make the team for his versatility? A joke.
In NCAA news, the Big 10 conference is looking to expand. First, the Big 10 is actually the Big 11. And based on the way they play and look, they should name the new conference the Slow 12.
They’re looking at adding Rutgers, hyped as a means to get New York exposure, which is hilarious, as Rutgers is in New Jersey and no one in New York gives a damn about Rutgers.
Speaking of Big East teams, they should just disband that conference. I wouldn’t watch that s%$# if they pinned my eyes open like Clockwork Orange.
Notre Dame doesn’t want to be in a conference, but if they can’t turn that program around at some point, they may lose the fat television contract and need the Big Slow 11.
Speaking of Notre Dame, they just endured two coaches they weren’t happy with. So after firing Charlie Weis, whom they still owe $16 million, they took a whole 48 hours to hire another coach, another spread offensive ‘genius’ – Brian Kelly – whose teams don’t play defense.
Continuing. Kelly leaves the university of Cincinnati high and dry. He tells the team he can’t coach the bowl game when the team is 12-0 ‘cause he has to recruit for Notre Dame. That is bull. These kids fought their butts off and got to 12-0 so this jerk could abandon them right before the bowl game. How screwed up is that? But when the kid leaves early for the money (pros), the kid’s greedy?
Tiger Woods. Enough already. They act like he killed someone. Kobe Bryant raped someone and got less scrutiny. Ray Lewis drove a murderer home and still has UnderArmor commercials. Give it a rest.
The funniest thing was seeing John Daly on TV giving advice to Tiger. Ron Artest, too. Message to the media: How stupid do you have to be to put a microphone in front of these clowns and take it seriously enough to even broadcast it?
Gotta Roll, Tiger is calling. Should have called me two weeks ago to clear that chick’s voicemail. At least he finally got that throwaway cell phone. Dumbass.
What’s up, Tiger? No, no … you can’t use my car. I saw what you did to yours. And you don’t use condoms either? You’ve got problems.