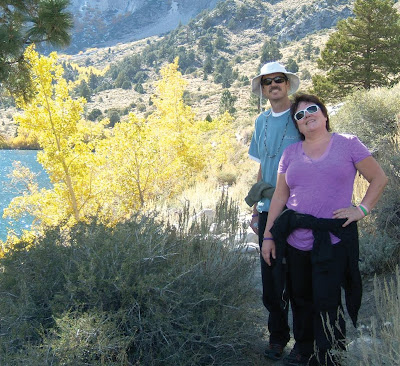 As Shana Stapp said this week, when her husband was diagnosed with pancreatic cancer in September, many community members wanted to offer help and support but didn’t really know how best to do it.
As Shana and husband Joe juggled hospital appointments and family obligations (they have two high school-age daughters), friends Judy Burgenbauch and Erin LeFrancois put together a dinner signup sheet online at www.mysignup.com (enter elefrancois@mammothusd.org to search for the signup). The dinners have been extended through February and there are still slots available.
Meanwhile, Ed Graef’s been helping out with the snow removal and a group from Mammoth Hospital (a project spearheaded by Stephanie Stanton) made Joe a quilt which a slew of people have signed and which Joe said he uses and reads every day.
Whenever Joe gets down, his wife tells him, “Wrap yourself in that quilt, Joe, because this town loves you.”

Joe Stapp, who works as an Information Technology specialist for the Mammoth Community Water District, is a fit, active outdoorsman who had never had a single health-related issue in his life until he began having some digestive issues two years ago.
Only recently, had the digestive issue morphed from a mere irritant to something more painful.
While he was in Reno with Shana undergoing some tests in September, they were both sitting in a waiting room when Joe suddenly felt full and decided to go to the bathroom.
The door was locked. Joe waited. He couldn’t wait anymore. He felt nauseous and began calling for his wife as he vomited blood into a trash can.
The tumor in his pancreas had finally placed too much pressure on surrounding organs, and a varices had blown.
He stayed in Intensive Care for two weeks.
He started chemotherapy as soon as he was physically able, but in the two months following the waiting room episode, the tumor tripled in size.
They won’t measure the tumor again for another few months.
Both Stapps knew the odds, and they are not favorable. Joe’s cancer is inoperable because it’s grown into the portal vein system. Yet, the Stapps have beaten cancer before. Joe saw Shana through her battle with breast cancer in 2002.
I asked both Joe and Shana which is harder, being the caregiver or being the patient.
Shana: It’s hard watching someone in pain, but that’s easier than going through it yourself. When you’re going through it yourself, it’s both emotional and physical. He’s got that double-whopper,” she said.

Joe and Shana met 18 years ago. Shana had just gotten out of the military and was taking some time off before she headed off to college. Her brother-in-law spotted an advertisement in a San Diego newspaper about a job fair Mammoth Mountain was holding locally.
She got a job driving for the Mountain. Joe was her supervisor. They began dating within six weeks.
Knowing Shana was headed off to college, Joe decided to go to college, too. After all, he said, “She knew what she wanted. I didn’t know what I wanted. So I went along for the ride.”
They ultimately returned to Mammoth to raise their girls. “You can’t ask for a better commute,” said Joe.
While Shana got her teaching credential, Joe went to work for Cerro Coso. His profession (I.T.) suits him. “Joe is just one of those people who can read a book and figure it out.”
It was Joe who built the Stapps’ garage add-on by himself. “He bought some books, talked to some contractors and bought some beer for the friends who’d come over to help,” said Shana.
After the job was completed, Kathy Cage asked Joe whether he planned to get into the remodel business. “No, no,” was Joe’s reply. “One and done.”

Chemotherapy is, for better or for worse, the best that western medicine has to offer at the moment, and that’s the direction the Stapps are heading in now, though Joe is exploring other options, including radical diets and Chinese power healing.
“Surreal” is the word Joe uses to describe how he views his current predicament. Shana’s a bit more blunt: “This is a shitty thing that’s happening to my husband … his body is betraying him in every way possible, and when you’re such an oudoors person … “
Her voice trails off. Both Stapps have a moment.
“I don’t feel like I’m ready to die,” says Joe finally.
When Shana thinks back to Christmas a year ago, it’s a million miles away. But even then, in that different time and place, there was a little sign of things to come.
Among the gifts Shana received last Christmas was a gift from Joe’s mother, a book based upon the “Last Lecture” given by Carnegie Mellon University Professor Randy Pausch before his death.
The lecture has thus far been downloaded by 10 million people.
“The brick walls are there for a reason. They’re not there to keep us out. Brick walls are there to give us a chance to show us how badly we want something.” -Randy Pausch.
The Stapps give thanks to the many people who have cooked for them these past few months. They include: Claire Roy, Becky Davis, Michelle Carrigan, Heidi Presson, Ruth Hensley, Lisa Anderson, Jeanne Woo, Trish Qualls, Vivian Hanson, Cindie Wormhoudt, Lisa Graef, Lee Ann Eller, Julie Smith, Kristin McBride, Margarita Cuellar, Cynthia Pretzel, Regan and Karen Greene, Trina Sobota, Marci Jefferson, Blair Hafner, Lynne Peabody, Denice Hutten, Cheryl Petersen, Jeanne Oakeshott, Angie Parks Greig, Beverly Schroeder, Nancy Worden, Sue King, Chantal and Tom Linnastruth, The Desalvos, Lee Ann and Chip Wood, Heidi Leary, Stephanie Stanton, Val Case, Jill Vanko, Gloria Vasquez, The Stimsons, Jules Jackson, Judy Burgenbauch, Denise LaFramboise, Lisa Okamoto.
Additional thanks to Laura and Al Timpano for the Christmas tree, Greg Newbry and Dick Emerick for putting up the Christmas lights, Chantal Linnastruth for being there for the girls and Shana, the AYSO board, everyone at MCWD and MUSD, all of Sierra and Clare’s friends, Joe’s close pals Keith Dawley and Paul Meyers, Tom Cage and Julio Chevarria.