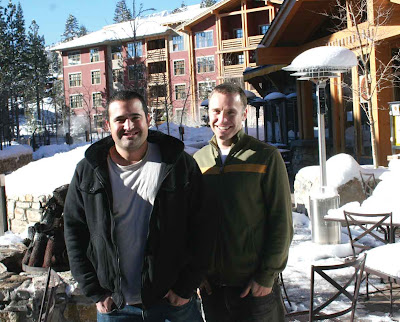 When you grow up in a politically charged climate where the black people don’t like you because you’re white and the white people don’t like you because you’re Jewish, there is nothing that tastes quite so sweet and is appreciated quite so much as personal freedom.
It’s this freedom which has inspired brothers Alon and Guy Ravid to achieve great success in business. And it’s a success borne out of joy.
As Guy relates, “We both want to make the world a better place, but since we’re not doctors … we had to ask ourselves how we could tangibly do that. A great dining experience is tangible.”
“We want them leaving [the restaurant] happier than when they walked in,” Alon chimed in.
Guy, 34, and Alon, 31, opened their newest restaurant, The Smokeyard, in the Village at Mammoth on Dec. 31. They took over the spot formerly occupied by Restaurant LuLu.
The Smokeyard is a barbecue/steakhouse which also offers thin-crust pizzas and great salads and appetizers. Its liquor license is expected to come through as early as Tuesday.
The brothers grew up in Johannesburg, South Africa. Their mother is a native South African, while their father is an Israeli.
They moved to the United States with their mother in 1990. “Mom had been trying to get out of South Africa for a decade [because of the political situation],” explained Guy.
“She ended up selling off everything she had to get out.”
Sheet: So how’d you end up in the U.S.?
Alon: We were aiming for Jamaica and overshot it.
This, I discovered, is classic Alon. He’s the joker, the man brimming with ideas. Guy, he’s the older brother. He’s the pragmatist and the worrier.
So do they ever fight?
Stupid question. They’re brothers. Of course they fight. But it never gets too serious. Why?
“Winston,” says Guy.
Huh? (Turns out it’s a line “Chill Winston” from the film “Lock, Stock and Two Smoking Barrels.”) Anytime a conversation gets a little too heated, one of the brothers says ‘Winston,’ and the tension instantly dissipates.
“So who’s working for who, today?” askes Alon.
“You’re working for me,” says Guy.
The converrsation continues for about another 30 seconds until Guy is interrupted by a text message.
“My brother just texted in sick,” he tells me.
Guy was the first brother to get into the restaurant business, opening a Japanese fusion restaurant in Westwood Village in L.A. at the tender age of 24.
What did he know about Japanese cuisine? Not much.
“There was a hole in the market,” he explains. So first, he found a great Japanese chef. Then he recruited a friend (also a chef) whose specialties were French and Italian. Meanwhile, his business partners had a nightclub background. Throw it all together and he had a fine dining spot with a great after-party.
Alon joined his brother in business two years later.
Since that time, they’ve opened another successful Cuban restaurant in Hollywood, a 12,000-square foot nightclub and assumed the role of managing food and beverage at the W hotel in L.A.
Both Guy and Alon are well aware of some of the many pitfalls of doing business in Mammoth, and they very much plan on being hands-on owners.
Alon rents a place above the restaurant in the Village and Guy lives at Fireside.
Guy, by the way, is planning a summer wedding in Mammoth. His wife is currently finishing out the year teaching school in Southern California.
The key to a successful restaurant? Guy says, “Don’t force a concept into a location. Research what people are looking for.”
In the case of the Smokeyard, he thinks people are looking for “slow and low” barbecue which takes 8-12 hours to prepare, homemade sauces and a welcoming atmosphere.
He is, however, nervous about chef Jeremy Zimmerman. Well, not really. “Never trust a skinny chef,” laugh the brothers.
Sheet: Any other words of wisdom?
Alon: If anyone ever calls you ‘buddy,’ you’re screwed.
The brothers Ravid are a lot of fun and promise to put together a great restaurant. We expect Mammoth will reach the same conclusion.