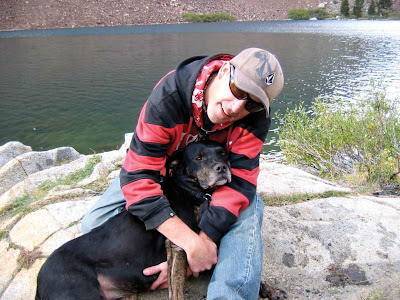 “Let’s see, I’m a 33 year old punk from Mammoth Lakes, Calif. originally the San Fernando Valley. I’ve been here for years and I can’t see myself leaving anytime soon. It is a small town but when you lived in Los Angeles for pretty much your whole life, a change of pace is damn nice.”-Josh Sokolow
Josh Sokolow, 33, died January 12, 2010, of complications from pneumonia at his home on Lupin St.
Services will be held this spring at a lake and date to be determined.
Josh was born Dec. 20, 1976, in the San Fernando Valley. He graduated from Trabuco Hills High in Mission Viejo, Calif. He made Mammoth Lakes his home in 2004.
Josh Sokolow was always “keeding” because he “luvs,” as he always put it if he felt like he was joshing around with you a bit too much. He lived his life in the Eastern Sierra surrounded by what he was passionate about with close friends that shared this common thread. He was snow skating on the first snow every year, riding June and Mammoth, hitting the secret stashes on the hill we do not want everyone to know about. He was out on the lakes well before sunrise on opening day with his fishing rod in hand and eager to hike anywhere to catch the bigger fish. He was always quick to instruct you on proper golf etiquette on the courses. A Los Angeles Lakers and Kings fan loud and proud, but a Pittsburgh Steelers fan by blood.
Most people getting gas on Sundays at Shell knew him as that Steelers fan waving his Terrible Towel behind the counter. In town Sokolow worked at Casa Diablo, A-Frame Liquor and Shell. You may recognize him as the guy in the red and black hooded sweatshirt walking his Pit-Rottweiler Maggie through the ghetto.
Sokolow is survived by his mother Marion & stepfather Paul, his sisters Beth, Nicole, Dawn and Mariah, his girlfriend Jamie Derrick, his dog, Maggie, and all of us here in the Eastern Sierra and San Fernando Valley who had the pleasure to get to know a great friend. -Randy Villarba