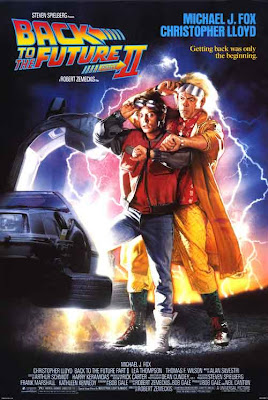 Describing how the whole Evil Biff thing works is too cumbersome for a caption. Rent “Back to the Future Part II” … it makes more sense and it’s more fun. (Artwork courtesy Universal)

Can Tony Barrett snatch the almanac with the help of his hoverboard before Evil Biff bankrupts the Town?
Yes, it’s Back to the Future Part II as current Mammoth Lakes Planning Commissioner and former Councilman Tony Barrett announced Wednesday he will run for a seat on Council in the June election.
This comes on the heels of former colleague Rick Wood’s announcement last week.
Barrett believes an experienced candidate who can “hit the ground running” is best-suited for the current political climate.
Barrett said he’s “matured” since his last Council term (he finished 4th in his 2006 reelection bid). “You can’t govern from the left or right,” he said. “I can work with the holdover members [not up for reelection]. I’m reaching out to the Advocates [for Mammoth].”
Barrett said that years ago he fondly remembers being called the “People’s Candidate” and he wants to go back to that. “I acknowledge I may have lost some of that toward the end of my term on Council,” he said.
In a press release issued by Barrett Wednesday, Barrett wrote, “The issues we face take more than me or any five council members. The issues we face take the community and the Town Council working together, working cooperatively … We can come to consensus to make decisions, not hastily, but in a level-headed, educated, community-involved manner. We have done this before and we can do it again.”

Can Kirk Stapp stop Mad Dog Tannen from gunning down the Town budget? Will we see Back to the Future Part III?
Another former Councilmember, Kirk Stapp, is also pondering a run for office following an electoral defeat two years ago.
In speaking with Stapp, you sense the itch is borne of frustration.
In good times, said Stapp, service levels define a budget, but in tough times, budget realities should drive service levels.
The current push by some Councilmembers to create a “performance-based budget,” is a mistake, says Stapp. Aside from his problems with performance measurement criteria, which he says are too vague, Stapp thinks the focus [on service level as opposed to what we can afford] is all wrong.
Stapp supports an extension of the Utility Users Tax (UUT), which he believes should be divided evenly between the Town government and the Mammoth Unified School District (which is sure to get hit in the next round of state budget adjustments).
The Town, he said, should use its portion of the revenue to finish long overdue projects such as the ice rink roof and construction of a new public safety facility.
As for the whole “community benefits” issue, Stapp is disturbed that affordable housing has been downgraded from a requirement to a benefit. He does not believe developers should be bailed out of requirements if they happened to have paid too much for their property.

As for Eastman and Lehman …

Though he said he will not issue a formal announcement until next week, five-term Councilman John Eastman said this week that he will seek reelection.
“I love being on Council. I enjoy it. And with the possibility that the direction will change with the next Council … I want to be a part of that.”
As a point of clarification to a blurb printed in The Sheet last week, Eastman says he supports having the extension of the Utility Users Tax (UUT) on the June ballot for the voters to decide, but that he himself does not support the extension.
First, he said, our local government hasn’t demonstrated that it deserves more money from the people to spend. Second, the economic climate is difficult and if the government can give some money back to the people, it should.
As for Matthew Lehman of Matthew Lehman Appraisal and Trademark Properties, he said he is 90% sure he will seek office, but will not make a formal declaration either way until next week.

Magit to take on Gephart

“I am formally announcing my candidacy for Mono County Superior Court Judge. I will work hard to serve all the people in our community, from Paradise to Topaz, from Old Mammoth to the Tri-Valley, in a fair, equal, thoughtful, and respectful manner.  I see the role of Judge principally as a problem solver who makes decisions based on the law and common sense. I believe that the law and justice truly matter, and when enforced and consistently applied, improve the quality of our lives.
During my 22 years as a lawyer in this County I have demonstrated this commitment to the law.  I have worked for Mono County for 18 years as Deputy District Attorney, Child Support Director, and now Assistant County Counsel.  I have represented the County in criminal prosecution, government administration, land use, personnel, and juvenile dependency matters. In private practice, I represented clients in family law, civil, and criminal matters.  This broad experience has shaped and deepened my understanding of the importance of a fair and efficient judicial system.
I would be honored to meet with you, earn your vote, and serve as Mono County Superior Court Judge. Please make an informed decision and vote on June 8th. Thank you.” -Mark Magit