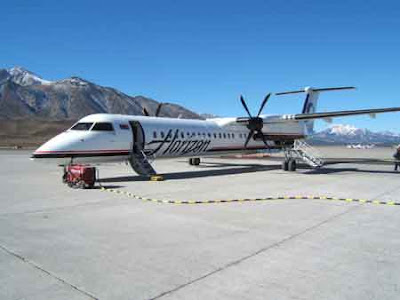 With increased flights, the number of passengers flying Horizon Air between Mammoth (pictured) and LAX has skyrocketed … seems the overall situation at the Mammoth Yosemite Airport is gaining altitude … (Photo courtesy www.MammothRealEstate.com)

Even if you’re George Clooney’s character in the recent movie “Up in the Air,” it would be hard to rack up 10 million frequent flier miles going between here and Los Angeles. Even so, a lot of travelers are taking advantage of Mammoth/Yosemite’s expanded flight schedule, especially between here and LAX.
According to the most recent booking report figures presented to the Airport Commission Wednesday evening, bookings are up roughly 110% over the same time last year. One would think that an additional flight might water down that statistic, but the opposite seems to be true. According to Assistant Airport Manager Brian Picken, the stats aren’t averages either, but represent actual “butts in seats.”
And even the recent bout of weather hasn’t hampered travel much, with only one or two delays experienced, and a handful of cancellations, all weather-related. If anything, said Airport Manager Bill Manning, most flights are turning around quite speedily, averaging 15 minutes early both arriving and departing. By comparison, Vegas and Orlando airports were both recently closed for icing, but so far ice has not been problematic at MMH.
As for the figures for overall general aviation, or private and other business aircraft, they’re still off 35% from two years ago, but are even with last year.
Manning also said that in light of the traffic flow through the airport generated by the new flight schedule, the Town’s goal of 10,000 enplanements, at which point at least $1 million in Federal Aviation Administration funding kicks in, is looking realistic by the end of the season.
With a country focused on creating jobs in a recessed economy, the airport has added roughly 20 positions. A pair of Transportation Safety Administration staffers have relocated here, but Manning said more local hires are in the works. And that figure doesn’t include ancillary transportation and other support services jobs related to the airport.
On Feb. 17, the Commission plans to hold a joint meeting with the Town Council (at 5 p.m. in Suite Z) to review past accomplishments and future plans. One of those long-term objectives: a new, bigger terminal building that will be needed to accomodate increasing numbers of passengers as flight schedules expand.
The time horizon for a new terminal is at least 5 years out.
Manning said that, in addition to FAA subsidies, a new terminal would require a fresh Environmental Impact Study, no matter what type of planes are involved. “A new buliding means more jobs, a bigger footprint, more takeoffs and landings,” he pointed out. The airport is already looking to better accomodate more and different types of jets by extending the “declared distance” (used for calculating takeoffs and landings) an extra 1,000 feet in both directions. Implementation, however, will require purchasing a specialized database for an extra $100,000.
“Just don’t make [the new terminal] too big,” cautioned Commissioner John Walter, who also advocated for “reasonable time” for the scoping process. The Commission also plans to push for adding more destinations (Vegas, for example), more support for general aviation and more multi-county relationship building with other airports in the region.
Commissioners will also advise Council that a proposed merger of the Airport and Mobility commissions at this point would not be a good idea. The Airport Commission’s work, it will insist, is too specific to the airport itself and merging the two will make one commission that is “too broad in scope.”