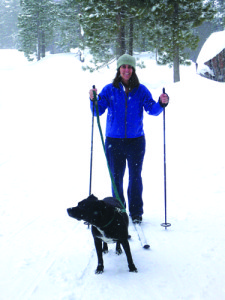 During summer, the greens of Sierra Star are just that, green … a brief home away from home to golfers taking up its challenge to see how good they are at the game at 8,000 feet. Few courses in the world sit at that altitude, and maybe the world’s best players haven’t warmed up to the practice of coming here for high-altitude training, as have athletes in other sports. No matter. Above all else, the Star is a local favorite, where you can find guests and visitors zipping around on carts or pulling their golf bags while the weather is warm and sunny.

When it’s NOT warm and sunny, though, the rest of the year it’s dormant. In the dead of winter, the greens are white, covered by a blanket of snow that won’t see a club, driver or set of spiked shoes for months. It’s made for a picturesque scene, but that’s about all it’s been good for. Until this winter season.

Last Saturday, Tamarack Lodge, in association with Sierra Star owners, launched a month-long pilot program that opens the snow-covered course up to different kinds of sports: snowshoeing and cross-country skiing. Tamarack’s Roy Moyer said the seasonal access is part of a four-week pilot program that, if used enough, could lead to permanent access to a groomed course.

For now, it’s being done on something of a “bare bones” basis, with few trimmings avaiable. No rental gear or even cocoa is available on site. But the course is actually almost as much a gem in winter as it is in summer.

Snowshoeing the course, which essentially mirrors the golf cart path, was a zippy, quiet and most of all gorgeous trek. Duffers who generally know the golf course layout, can still make out driving and putting greens as they travel.

Traveling through the trees and passing various homes, all decked out in trims of winter white, and developments that line the course’s perimeter makes for some pleasant scenery.

Length is reportedy being tested, so expect some variance during the next few weeks. One path my wife, dog and I took lasted a good half-hour, and we didn’t travel the entire path. Cross-country skiers may cut some time off that figure, but even so, if you want to spend a fair amount of time on your skis, there’s probably enough trail to use up at least the better part of an hour.

One skier we talked to, Stacey Posey, who was out for a jaunt with her dog, Lady, said she liked the idea of being able to nip over for a quick outdoor getaway. “It’s great, particularly for a weekday break, when you don’t have a lot of time to venture into the nearby trail system or out into the backcountry,” Posey said.

That makes a lot of sense, especially for nearby residents who can leash up their pooches and walk to the course.

Moyer indicated that if the program takes off and trails are properly respected by users, plans could be set up for next year to have rental gear on site. For now, you have to bring your own or rent from Tamarack or other area shops. (Maybe the clubhouse could have some coffee and cocoa available then, too.)

Bring your dogs, as Posey and I did, but make sure you also bring baggies, as keeping a clean course is one of the rules, as is staying off the greens and on the groomed section. (They did groom it for a reason, you know.)

Note to Tamarack: baggie dispensers and receptacles would be a nicety for next season (or even this season) as well.

Overall, considering it’s free to use, easy to get to and beautifully groomed, the Sierra Star option could be one new community amenity whose own star is on the rise.

The pilot program is scheduled to end Sunday, March 7.