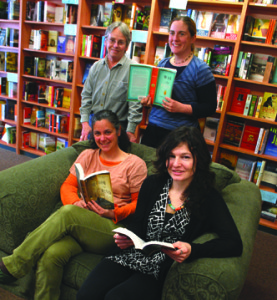 Have we reached an age when both physical books and independent bookstores will become obsolete? Amazon.com is the largest grossing book retailer in the world, Borders and Barnes and Noble sales run close behind, and portable electronic reading devices can now replace tangible books with virtual reads. Despite these unfavorable odds, local independent booksellers contend that they will continue to serve a loyal niche market.

In certain ways, Amazon.com and big chain stores, such as Borders and Barnes & Noble, cannot directly compete with independent bookstores, said Dave Leonard, owner of the Booky Joint in Mammoth Lakes. Unlike the online entity of Amazon, independent bookstores often have a friendly and helpful staff, and a place to sit down and browse through books. Compared to corporate stores, they offer a more intimate atmosphere as well, Leonard said.

He said he also doesn’t foresee inventions like Kindle and the iPad replacing books to the point of running bookstores out of business. Lynne Almeida, co-owner of Spellbinder Books in Bishop, said there probably has been a degree of customer decline resulting from these new technologies.

“Once you buy a Kindle, you’re basically committing to not supporting your local bookstores anymore because you can only download books from Amazon.com,” Almeida said.

However, she said, people still seem to have an ingrained inclination towards printed material, which probably won’t change drastically in the next couple of years. Almeida said she took home a Sony E-Reader one night to test it out. She resigned herself to the task of reading it for half an hour to consider its consumer value. It was easy to read, and didn’t cause any eye strain. But has she picked it up again? No, and what’s more, Almeida says she’s not really worried about these new technologies replacing books in the near future.

“It’s definitely an area of technology to keep up with and pay attention to, but nothing to freak out about right now,” Almeida said.

The real threat, she said, comes from Amazon’s potential total control of digital books and print-on-demand publishing. Amazon has already become the only distributor of a new book about President Barack Obama, and is arranging with certain publishers to release books exclusively through Kindle. Amazon can also have the opposite effect on bookselling, in the form of withholding books from the public.

“If Amazon says, ‘We don’t like that book. We’re not going to sell it,’ they can prevent books from being sold or even published,” Almeida said. “The overall right to freedom of thought and freedom of expression is not served by the way Amazon is being run.”

Exclusivity is not the only competitive advantage exercised by Amazon. The company’s unbeatable prices have a tendency to sway book buyers away from independent bookstores which have less wiggle room on discounts, Almeida said. According to a 2009 Verso Advertising survey of book-buying behavior, price is a primary factor in making book-buying decisions.

However, it’s impossible for small businesses to sell books at prices comparable to what a company like Amazon can offer when it has a vast supply of stockholders. Since people continue to buy their stock, Amazon can afford cutthroat prices.

Almeida said Amazon and Wal-Mart control almost half of all book sales, which is most likely a result of their unrivaled discounts. Spellbinder Books gives $35,000-$40,000 a year in book discounts, which is still not enough to compete with big corporations.

“Target, Wal-Mart and Amazon.com started pricing certain books at $8.99 and $9.99, below the cost to produce them,” Almeida said.  “So then there started to be a lot more noise about what these big corporate entities were doing to devalue books and literature.”

While Amazon and big box stores like Wal-Mart and Target may offer lower prices, buying books from these corporations comes at a cost. When money is spent at Amazon or international chains, these dollars don’t stay within the local economy. By contrast, a local retailer spends a larger portion of its revenue on local payroll, since it doesn’t rely on corporate staff stationed in some other part of the country. Additionally, local businesses often invest in more products and services from within the community.

“The more times a dollar has circulated within a community, the more it serves the local economy,” Almeida said. “I don’t think that K-Mart gets their register tape at Peggy’s Office Supply.”

Local bookstores are also usually more involved in the community in the form of promoting local events, as well as giving discounts and donations to educators and non-profit organizations. The Booky Joint gives a 10 percent discount to book clubs in Mammoth, as well as certain discounts for honors students and frequent buyers. Almeida said she wants to start a frequent-buyer program at Spellbinder that would reward patrons with discounts for their loyalty to the business. And while common sense would tell some people that the local bookstore is the obvious place to buy books in town, Spellbinder is not always first on everyone’s list.

“A lot of people in town come in here and say, ‘I’ve looked everywhere in town for this book,’” Almeida said. “And my first thought is, ‘So your town bookstore is the last place you come?’ I think a lot of people have it ingrained in their minds that K-Mart is the first place to shop for books.”

Studies have consistently found that a greater percentage of money stays within a community when it is spent at local businesses. A study conducted in Chicago by the firm of Civic Economics showed that every $100 spent at a national chain created an average of $43 in additional economic return within the community. In contrast, $100 spent at a local business generated an average of $68 in additional economic activity.

“I think it’s always good to keep money in the local community,” Leonard said. “If you want a community, then you need to support local stores.”

For the most part, supporting local businesses means actually spending money at them. Almeida said there’s a direct relationship between how many books people buy at the bookstore and how wide a selection of books the business can carry. She recalled a time when a customer entered the store and admitted that she hadn’t visited the store in almost three years. The customer then commented on how the number of books in the mystery section had dwindled since the last time she was there.

“I didn’t ask her how she didn’t see the disconnection between only coming here every two or three years and not seeing books on the shelves,” Almeida said.

While Spellbinder and the Booky Joint may not have every book in stock that a customer wants, it’s easy to order most books and have them delivered between two and five business days— a faster shipping period than Amazon offers. Community services are another area where Amazon pales in comparison to local bookstores. Events such as author talks and presentations, book clubs, and programs in schools are hosted by Spellbinder and the Booky Joint. The same can’t be said for Amazon.

“A lot of people in town make a conscious decision to support us,” Leonard said. “Amazon is probably our biggest competitor in town. But I think people are used to going to the Booky Joint since it’s been in business for over 30 years.”

Despite a recession, competition from Amazon.com, advances in technology, and being located in relatively small towns, both the Booky Joint and Spellbinder continue to stay in business. Leonard attributes this success to the loyalty of Mammoth locals and to the tourists who need a good book for their vacations.

Almeida said sales for this past holiday season were up a lot over last year, and she hasn’t been able to say that for many years. She said it was a really validating realization for the business.

“I’ve been told that an independent bookstore can’t survive in a community of less than 25,000. But here we are!” Almeida said. “There’s a certain segment of the population who are staunch in their support and loyalty to us.”