Century 21 realtor Peter Maw forwarded a web page a few weeks back which he’d seen on the Fifty Center’s website. There was a banner ad on the bottom of the page whose tagline read: “Hey Los Angeles. We’re just a quick flight away.”

Was it a Horizon Airlines ad? No.

Was it a Mammoth Mountain ad? No.

It was an ad for Sun Valley Ski Resort in Idaho. Hmm. Wonder what the Fifty’s local advertisers think about the paper encouraging its readers to bypass Mammoth?

Spoke to a local restaurant owner last week who was bitching about Yelp, the online ratings website.

Apparently, Yelp had removed all the positive reviews about his restaurant from the site, leaving only the negative.

Then Yelp sales associates had pressured him to run advertising with the website.

Imagine my surprise when I was forwarded a story entitled “Yelp Hit With Class-Action Lawsuit For Running an ‘Extortion Scheme’” from www.techcrunch.com. The article, written by Robin Wauters, was forwarded to The Sheet by Steve Linde, a subscriber who lives in the Bay Area.

Below are the lead two paragraphs:

The plaintiff in the suit, a veterinary hospital in Long Beach, Calif., is said to have requested that Yelp remove a negative review from the website, which was allegedly refused by the San Francisco startup, after which its sales representatives repeatedly contacted the hospital demanding payments of roughly $300 per month in exchange for hiding or deleting the review.”

Severy was the guest speaker at Tuesday’s Chamber of Commerce luncheon, and took several potshots at Mammoth’s “built environment,” as he panned what he believes to be the decrepit buildings and ugly architecture that line Old Mammoth Road and Main Street.

“The built environment [in Mammoth] is as bad as it gets,” he said.
“I spit up blood when I have to travel up Main Street or Old Mammoth Road.”

*Hmm. Perhaps he should get that ulcer checked.

Some of the buildings are so old and decrepit, he added, that “you could throw a cat through the wall.” Hence, cats being scared around Severy. Wait’ll we sic Lisa Schade on him!

Severy, a former Intrawest executive who shepherded the Village at Mammoth and Juniper Springs Lodge through the entitlement process, is now attempting to do the same for Old Mammoth Place, a mixed-use development proposed for a six-acre site where Sierra Nevada Lodge, Rafters and the former Ocean Harvest restaurant now sit, bordered by Old Mammoth, Sierra Nevada and Laurel Mountain roads.

Now, I don’t know Dana very well, but if he’s speaking, as a reporter, it’s worth sticking around. His filter isn’t great. It also appears as if the battles he fought to win approvals 10 years ago are still shaping his outlook.

Which, said former Mayor Kathy Cage, ignores a subtle, yet fundamental shift in local attitudes since Intrawest arrived on the scene. Cage said she thinks the Town in general is willing to be as patient as it needs to be to get the right project. We’re also a bit more skeptical of Greeks bearing gifts.

At one point, Severy told the assembled audience, “If you look at height in isolation, you may lose sight of the forest.”

*Then you should ask yourself whether or not to back away from the enormous building located three feet in front of you.

He then told a story about the Juniper Springs Lodge project, and how a Councilwoman (by deduction, Cage) had at first questioned the height of the proposed project, but after it was completed, had later confessed that the building looked “squatty” and that indeed the developer had been correct and the building could have used increased height.

Cage didn’t attend the luncheon. The Sheet tracked her down to ask her about the story. She doesn’t remember it quite the same way.

“Indeed, not only did I not say that, and the height’s just fine as it is, but I was also disappointed with how cheaply it was done. What I objected to, once I saw the completed project, is that they value-engineered the quality out of it.”

“When you walked through JSL, it didn’t look like what was promised,” echoed Planning Commssioner (and current Council candidate) Tony Barrett. “It wasn’t the Ahwahnee.”

Does this matter? Different project, after all. And different decade. But to quote that great ‘80s hair band Great White, “Once bitten, twice shy, babe.” As one longtime local [who is quite friendly with Severy] remarked , “When it comes to entitlements, he [Dana] has a sense of entitlement … and he’s gonna use the same formula [he used in the past] to try to achieve the same results.”

Part of that playbook, it appears, involves some disparagement of detractors both real and imagined.

“I can tell you who’s gonna come to the podium on March 10 [during a hearing on a specific plan amendment] and what they’re gonna say … I’m tired of the same people saying the same thing [no] about every project.”

But what’s odd about taking such a stance is that the project, as far as we could tell, appeared 90 percent in the bag (until this hiccup about height measurement cropped up). The fears of neighbors like Tom Moody of the Mammoth Association of Property Owners (MAPOA) appear to have been assuaged, and property owner Jim Demetriades has impressed locals and customers alike with the stylish renovation of his hotel rooms as well as Rafters Restaurant. Folks like Barrett acknowledge, “Demetriades has followed through on what he said he’d do.”

Yet the hint of a dark cloud appears on the horizon.

The showdown next month involves calculation of height. Not necessarily more height, as Severy aptly pointed out. The maximum building height remains 55’, but the starting point at which the height is measured. What is zero on a site that slopes 18 feet from end-to-end?

The developer wants zero measured from the top of the canopy of his understructure (not underground, which requires excavation and thus, is more expensive) parking lot. This would make the height (of garage plus development from someone standing on the ground) about 65’ over some portion of the site.

An amendment to the specific plan to address height will be addressed during the March 10 meeting of the Mammoth Lakes Planning Commission. 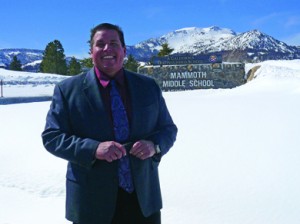 Gabe Solorio is the parents's choice

You know an issue is important when it draws a crowd during a snowstorm. Such was the case Wednesday night as parents and other concerned citizens attended an informal meeting Wednesday night in the MHS Multipurpose Room to weigh in on not only what they want in a new Superintendent, but also whether and how to possibly relocate current Mammoth Middle School Principal Gabe Solorio to MHS, possibly taking over for current principal Mike Agnitch, who retires at the end of the school year.

Parents were given a questionnaire to fill out, asking for their wish lists for a new superintendent in categories such as experience, personal characteristics, knowledge/skills, leadership and “miscellaneous” prior to putting the position out for notice with professional associations and agencies to start the recruiting process. In the meantime, Interim MUSD Superintendent Rich McAteer will likely field and hire applicants for the open MES and MHS principal positions.

But it was the MHS opening that drew the most specific comments. Parents presented a letter (with upwards of 100 signatures) to acting MES Principal Patrick Rogan, which has also been sent to McAteer, essentially advocating the district strongly consider drafting MMS Principal Gabe Solorio to take over the high school. The letter cited Solorio’s accomplishments, including earning California Distinguished Schools recognition, popularity among students, bilingual skills, ability to balance academic and athletics, and parental respect, in addition to the fact that he’s already here.

Former Board of Education Chair Shana Stapp, who’s also a parent and current teacher, echoed the letter, adding she’d like to see the process start in-house first, giving Solorio a chance to apply and interview, should that be a move he’s willing to make. (As it turns out, Rogan confirmed that is an option the district can legally utilize.)

Solorio told The Sheet Thursday that staying focused on the current MMS school year is his priority, but is following the situation. Aware of what going to the high school entails, Solorio added he has no plans to actively campaign for the job, but allowed that he would take very seriously any future discussion parents and the district wish to have on the subject.

Not everyone was so keen on uprooting Solorio from his current job. One parent reminded the group that the situation Solorio stepped into was already somewhat “cushy” when he got there, though they did qualify that by giving him full credit for his many accomplishments since taking over at MMS.

Some parents were critical of the hiring process in general. “We need someone invested in the community. How many teachers and superintendents have we hired with only 2-3 years left before retirement?” asked one parent.

Admittedly playing “devil’s advocate, Claire Kellett said, “I have kids in all three levels, and I’m thrilled with Gabe, but do we want to leave a hole in Mammoth Middle School? He’s not a high school principal, never has been.”

Parent Sherine Sanders said she thought there needs to be more emphasis on academics in the high school to “get our kids ready for college.” There are, she said, behavioral problems there that also need to be addressed. “We need someone with those leadership skills,” Sanders said. “We need Gabe. Any good principal can keep MHS running smoothly. We need to fix the high school now.”

Parents wishing to submit comments or participate in the questionnaire process can contact Kathy Emerick at the MUSD offices, 760.934.6802.

If I’m to be an agent for change, I need public support.

If you look at height in isolation, you may lose sight of the forest.

*Yes, you could lose sight of the forest.

*Yes, but your project also contemplates twice as many people as code.

Rgarrett: $17,000 to the County every time someone fills out a census form.