Local actor leaving for the bright lights of the big city 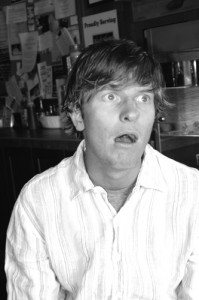 You’re leaving on a trip in a matter of hours and turn the corner at the post office and see the line. (Photos: Lunch)

Vanity Fair magazine has this section “In Character” where it poses three different questions to an actor and asks him/her to conjure an expression to fit the mood.

So I ripped off the idea and tried it on local thespian David Kubicka.

By the second question, Kubicka, 30, had fully warmed to the task and had personalized me as event security and was yelling at me to give him back his hat.

Being in character means never having to apologize for disturbing the peace.

Kubicka leaves this weekend for New York City, where he has enrolled in the summer conservatory program at the Stella Adler Studio of Acting.

Alumni of the Stella Adler studio include Marlon Brando and Robert DeNiro.

Sheet: So what made you decide that you wanted to spend a summer in New York City? That place is hell in the summer. That’s why they invented the Hamptons. 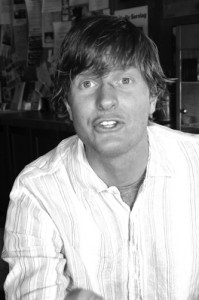 You’re Allen Blumer and you’re demanding security let you back in to retrieve your personal belongings after you got 86’d from a death metal show at Canyon Lodge.

Kubicka: Though the theatrical community is incredible here in terms of talent, I want to test myself on the next level. And I want to see if I can make a career out of it.

Sheet: Was there a defining moment that pushed you over the edge, so to speak?

Kubicka: It was during the Sierra Classic Theatre “Love and Madness” show they did for Valentine’s Day at the Bistro. I was doing a scene from  Romeo and Juliet and I’d just started reading Stanislavski and I felt … very clear.

Sheet: How does one enroll in the summer conservatory program?

Kubicka: There’s an application process which includes an interview. In the fall and spring, the courses last for 16 weeks. The summer intensive program is 10 weeks.

Sheet: And then you come home?

Kubicka: This is kind of an experiment. I don’t know how long I’ll be there. The idea is to make some connections and find a way to stay.

Sheet: Were you a theater geek in high school and college?

Kubicka: No, I studied mechanical engineering. 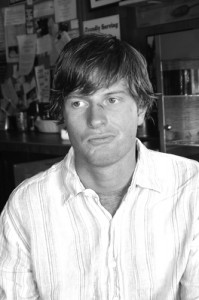 You’re a candidate for Town Council and just learned that you lost your bid for election by one vote.

Kubicka: My Mom encouraged me to get into theater when I was younger but I didn’t think it was cool and didn’t try it.

Sheet: Until you did.

Kubicka: Well, yeah. I actually came out to Mammoth in 2003 because I wanted to pursue professional snowboarding, but a year later, I blew out my knee and while I was rehabbing, I had time to do some different things. Lesley Bruns, a co-founder of Sierra Classic Theatre, was offering an acting class, so I decided to give it a try. Right away, I was pretty much hooked.

Sheet: What’ll you miss about Mammoth?

Sheet: What won’t you miss?

Kubicka (laughs): The people. Being in a small town and seeing the same people over and over again is both a blessing and a curse.

I will say that on the eve of my departure, I’ve started to appreciate the things I’ve so long taken for granted, like the hill.

Sheet: You probably won’t miss “the ratio.” New York has the most beautiful women on Earth. When I lived there, I’d walk through the garment district just for the sightseeing.

Kubicka: You know, I’ll even miss the ratio. Because it actually helped me develop other interests.

Sheet: What was your favorite role in Mammoth?

Kubicka: They’re all unique and you learn something new from each character, but I’d have to say Andrew Rally from “I Hate Hamlet.” Rally was a struggling actor. It hit a little close to  home.

Sheet: Fortunately, you were surrounded by an incredible supporting cast in that show. So, who’s your favorite actor?

Kubicka: DiCaprio, because he has so much range.

Kubicka: Well, a lot of my generation probably hasn’t seen Apocalypse Now. And then there’s Spies Like Us with Chevy Chase and Dan Aykroyd.

Kubicka: Hamlet. It may be a cliche, but that or something like it that’s a larger, huge, transformative role.