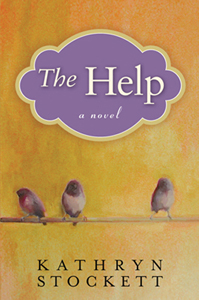 Race relations between blacks and whites may still have a ways to go, but there certainly has been some progress and promise, especially given the wide acceptance
of an insightful new novel, “The Help,” a fictional tale about African-American housekeepers in white households in Jackson, Miss., during the early 1960s.

Stockett spent five years writing “The Help,” which was turned down by 45 literary agents before being picked up by Penguin. Smart move … it’s since spent more than a year on the L.A. Times Bestseller list, and on May 27 of this year topped that chart.

Based on Stockett’s early life experiences with just such a situation (she was raised in Jackson), her first book is full of revelations. The book is unique in several ways. First, it’s told from the point of view of three major characters:

Aibileen, who has spent her life raising white children and recently lost her only son to very heartbreaking circumstances. The very sassy Minny, whose fiery manner is equaled only by her cooking, bounces from job to job. Her money struggles can be directly attributed to offended employers, but when she lands a position with a family too new to know her reputation, she soon finds they have secrets of their own. And Eugenia Phelan, aka “Skeeter,” a young white woman who has recently moved back home after graduating college only to find her childhood maid, Constantine, has mysteriously “disappeared,” or as her mother put it, “Constantine’s gone, Skeeter. She went to live with her people up in Chicago.” Is that the truth? Skeeter’s not so sure.

Skeeter has a college degree, but her life’s ambitions clash with the Southern culture of 1962, which turns its nose up at professional white women, preferring they be married instead of heading into the workplace or otherwise upsetting the social apple cart.

The stories are all connected, and each is filled with emotional twists and turns; still, I couldn’t help but think that it’s Skeeter who wittingly or not ends up providing the book’s underlying subtext.

Skeeter, it turns out, is so affected by “the help,” particularly what the mystery surrounding what happened to Constantine, that she contacts Elaine Stein, a non-fiction book publisher with Harper & Row, who encourages her fledgling writing efforts. Stein, who tells Skeeter she previously lived in Atlanta, becomes particularly interested in her young protégé when Ms. Phelan pitches her an idea that may lead a rather controversial, though potentially groundbreaking magazine feature article.

“I’d like to write this showing the point of view of the help,” Skeeter tells Stein. “They raise a white child and then 20 years later the child becomes the employer. It’s irony that we love them and they love us, yet … we don’t even allow them to use the toilet in the house.”

And second, as opposed to just being narrated as a white woman writing about black people, Stockett chose to create all three voices as if they were her own. Having grown up in the Deep South, similar to Stockett, I know what the voices should sound like, and trust me her accuracy is uncanny. Far more than just simply changing “are” to “is,” Stockett has a way with capturing inflection, intonation and general conversational parlance of the day (and even today in many areas).

Stockett’s depiction lets the reader hear, see, and practically smell and feel Jackson, Miss., during the Civil Rights movement, the larger world — including references to icons Dr. Martin Luther King, Jr. and Rosa Parks — analogized in the lives of “the help.”

One doesn’t have to get to her afterword about the writing of the book to know that her real life experiences left an indelible impression on her, and have been transferred with painstaking care to the cross-threaded storylines that make up “The Help.”

Indeed, there is still more to learn after the story is finished. Rare is it that an afterword renders as much emotion and power as the story that preceded it, but in “The Help,” it’s almost an extension of what you’ve just read. Frankly, you’re just not done with the book until you’ve read her thoughts on how the story came to be.

Is “The Help,” as she posits in her afterword, “too little, too late?” I’m not so sure. She selflessly maintains, “There was so much more love between white families and black domestics than I had the ink or time to portray.” Proud of her state’s heritage, she nonetheless admits, “I don’t presume to know what it really felt like to be a black woman in Mississippi, especially in the 1960s. I don’t think that is something any white woman on the other end of a black woman’s paycheck could ever truly understand. But trying to understand it is vital to our humanity.”

She recalls with pretty fair certainty that no one in her family ever asked her real life domestic, Demetrie, who cooked and cleaned for Stockett’s family, what it was like to black in Mississippi, working for a white family. “I have wished, for many years, that I’d been old enough and thoughtful enough to ask Demetrie that question,” Stockett writes. [She died when Stockett was 16.] “I’ve spent years imagining what her answer might be.”

As with any artist too close to their work, perhaps Stockett harbors a few doubts about what she’s accomplished with this book, but if you ask me, the answers she’s waiting for are here, and the world can use all “The Help” it can get.

The Help” is available at The Booky Joint in Mammoth Lakes, and Spellbinder Books in Bishop.