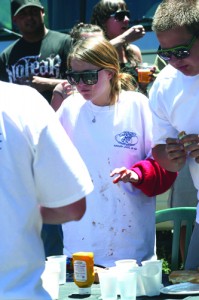 Madison Smith (daughter of Jarrett) did not fare as well, as she gave back her hot dogs to Mother Earth before the 10 minutes had expired. Next to her, Kenden Blake downed nine dogs, off from his 13.5 dog performance of two years ago. Kenden attributed his poor performance to being in better shape. 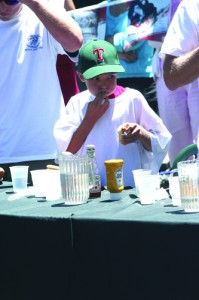 Kyle Schneider, 9 was a visitor competing in his 2nd competition. Schneider out-dueled The Sheet’s Mike McKenna, who could only down a little over four hot dogs in between gulps of beer and conversation.