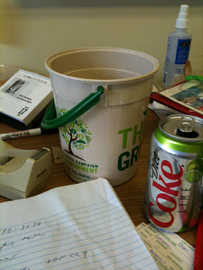 Last week, I talked about Dartmouth College’s quixotic attempt at trying to reduce the volume of garbage created by simply reducing the size of its garbage containers. Some of you thought I was exaggerating when I said the new trashcans were the size of 7-11 Big Gulps. Well, Prof. Sacerdote sent the accompanying photo this week, so
judge for yourself.
Hmm. Looks like a brilliant idea. Maybe we should reduce the size of our local dumpsters, because when a local dumpster is full, no one ever thinks of just leaving their trash next to it, right?… Caught up with the new Director of Mammoth Lakes Tourism, John Urdi, on Monday to see how his transition is coming along. Kids Corner had a spot left for his four-year old, so at least he’s got that covered. As for his department, he is currently trying to hire for a sales position as well as a marketing position. He’s got an offer out on the marketing position. The full-time Mammoth Lakes Tourism staff will be comprised of Urdi plus 4.5 employees. Another 2.5 employees will be dedicated to Visitor Center operations. The biggest surprise thus far? “The lack of focus on the web … blew me away,” said Urdi. One of his immediate goals is to improve Mammoth’s search engine optimization (i.e. make it real easy for web surfers to find what they’re looking for).
*Wait, didn’t we just spend $100,000 on that website? Never mind.
Urdi also wishes to replace POs (Personal Opinions) with EOs (Educated Opinions). To that end, he’s been analyzing past marketing expenditures and is breaking them down to determine their efficiency. He needs more reason to do things besides the fact that we’ve always done them.
As an example, he noted that the Town spent a lot of money last year advertising in Snowmobile magazines. Which may be an intelligent use of marketing dollars, but Urdi would like better quantification of results.
… Also spoke with Pam Hennarty, Executive Director of Mammoth Lakes Housing, who reports that she currently has 90 families on her rental housing waitlist, so certainly that part of MLH’s operations has proven very successful.
As for the for-sale units, like all developers, Mammoth Lakes Housing has had to battle through a period where they had too much inventory and faced a fairly severe credit squeeze.
In the case of their 24-unit Aspen Village townhome complex, Fannie Mae would not lend on the project until at least half of the 24 units had been sold. MLH was therefore compelled to lift deed restrictions and offer units to the wider (non-local) population.
19 of the 24 units have been sold. 11 of the buyers have been local. Five of the units are still deed-restricted as affordable housing.
On the bright side, said MLH’s Jennifer Halferty, the number of second homeowners within the complex has “really helped out with the parking.”
MLH has continued to have success in obtaining grants, and just received a new down-payment assistance grant for County residents.
MLH is also looking for grants to buy and rehab existing properties. It just used a federal grant to buy a fourplex in Old Mammoth.

I was saddened to hear that Betsy Smith is moving on. She’s been successfully running/managing Village events for years. Hers was a thankless job – no one notices the seamless planning … unless something doesn’t work – and she did it with humor, grace and a smile. The organizers of Mammoth Rocks were forever grateful last year for all the i’s Betsy dotted and all the t’s she crossed to help them be successful.

And from Geisel’s desk … Governor Arnold Schwarzenegger, State Controller John Chiang and Treasurer Bill Lockyer, decided on Monday to delay $2.9 billion a month in payments to school districts and counties sooner than expected so the state can meet debt and pension obligations.
The state is poised to begin withholding the payments in September instead of October. The move is yet another reactionary measure to grapple with the limited resources the state has to work with in its impasse over California’s $19 billion budget shortfall. The tug-of-war over the budgets has already dragged on for two months. Chiang further warned counties and school districts that the state could issue IOUs as soon as the end of August.
State lawmakers gave authority in February to the three officers to delay $2.5 billion a month in payments to schools and $400 million in monthly payments to counties during October, November and December to help manage cash flow. That move will bookend a July deferral of $2.5 billion for schools and $700 million for counties.
Criticism started immediately upon hearing the announcement. The state is only shifting its problems to school districts, according to Association of California School Administrators Executive Director Bob Wells. “What started as not a big deal is now delaying $10 billion for many months and school districts still have to meet payroll,” Wells said.
Locally, Mammoth Unified School District (and likely Mono County schools in general) won’t be affected. Finance Director Jim Maxey said the delay specifically involves apportionment payments to Revenue Limit school districts, and not Basic Aid, districts, of which MUSD is one.

The 11th annual Wave Rave skate contest will be held starting at 9 a.m. this Saturday, Aug. 28, at the Volcom Brothers skate park.
“This year will have the highest caliber skating to date,” boasts Wave Rave owner Steve Klassen. The park will play host to several pros from the Volcom pro skate team, who will ride the park on Sunday as the final stop of the Volcom Brand Jeans Tour. Pros such as Grant Taylor, Geoff Rowley, Rune Glifberg and Dustin Dollin will compete, but it’s not a “competition” per se. It’s a tour with no leaderboard … the skateboard equivalent of “Whose Line Is It Anyway?”
The amateur comp on Saturday will feature plenty of regional talent. Spectators should look for local favorite Patrick Reddy, who will try to reclaim his title after falling short to Rye Clancy in last years open bowl division. If you’re in attendance, be sure to bring in an old pair of jeans (any brand) to trade for a free Volcom hat. The jeans will then be donated to the homeless. Look for tons of free giveaways, a best trick category and jams from DJ Bloo.