Good save … Paul Romero Jr. and dad Paul Sr. got this bird out of quite a tangle. (Photos: Geisel)

The Romero family from Hawthorne had only been in Mammoth Lakes an hour or so on Thursday when they were called into service as Good Samaritans. Here for a weekend of fishing and fun, they hadn’t even dropped a line in the creek off Substation Rd.. not far from the Mammoth Dog Teams building, when Paul Romero and son Paul Jr. happened upon a hawk that had been tangled in some discarded fishing line and appeared to be pierced by a hook.

“My son and I agreed we couldn’t just leave it like that,” Paul Sr. told The Sheet. The two cut it free from the fishing line as Mrs. Romero got in touch with Eastern Sierra Wildlife Care, which arrived on scene within minutes. 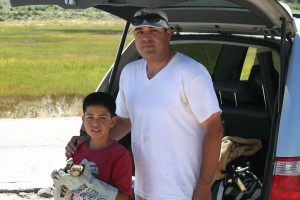 ESWC did not find a hook during its examination of the bird, but all the fishing line was removed from its feathers. The hawk was released back into the wild that afternoon.

“It looks pretty good,” said ESWC’s “Bud” after examining the bird on site. “I think it’s gonna be okay.”

Ed. Note: In our print edition this week, you may notice the headline on this story reads “Long Beach Doves Rescue Hawk.” Mr. Romero e-mailed us after the story came out to clarify that he and his family live in Hawthorne, though he works in Long Beach. We’re happy to make that adjustment here, but no matter where they’re from, the Romeros are nonetheless to be commended for taking the initiative when it came to saving the hawk. As Cindy Kammler from ESWC said, this family is “one of the good ones.” We agree.